It's almost summer, and it's the right time for slithering snakes to come out.

GREENSBORO, N.C. -- It's almost summer, and it's the right time for slithering snakes to come out.

We’ve seen all kinds of snake stories already all across the Carolinas. 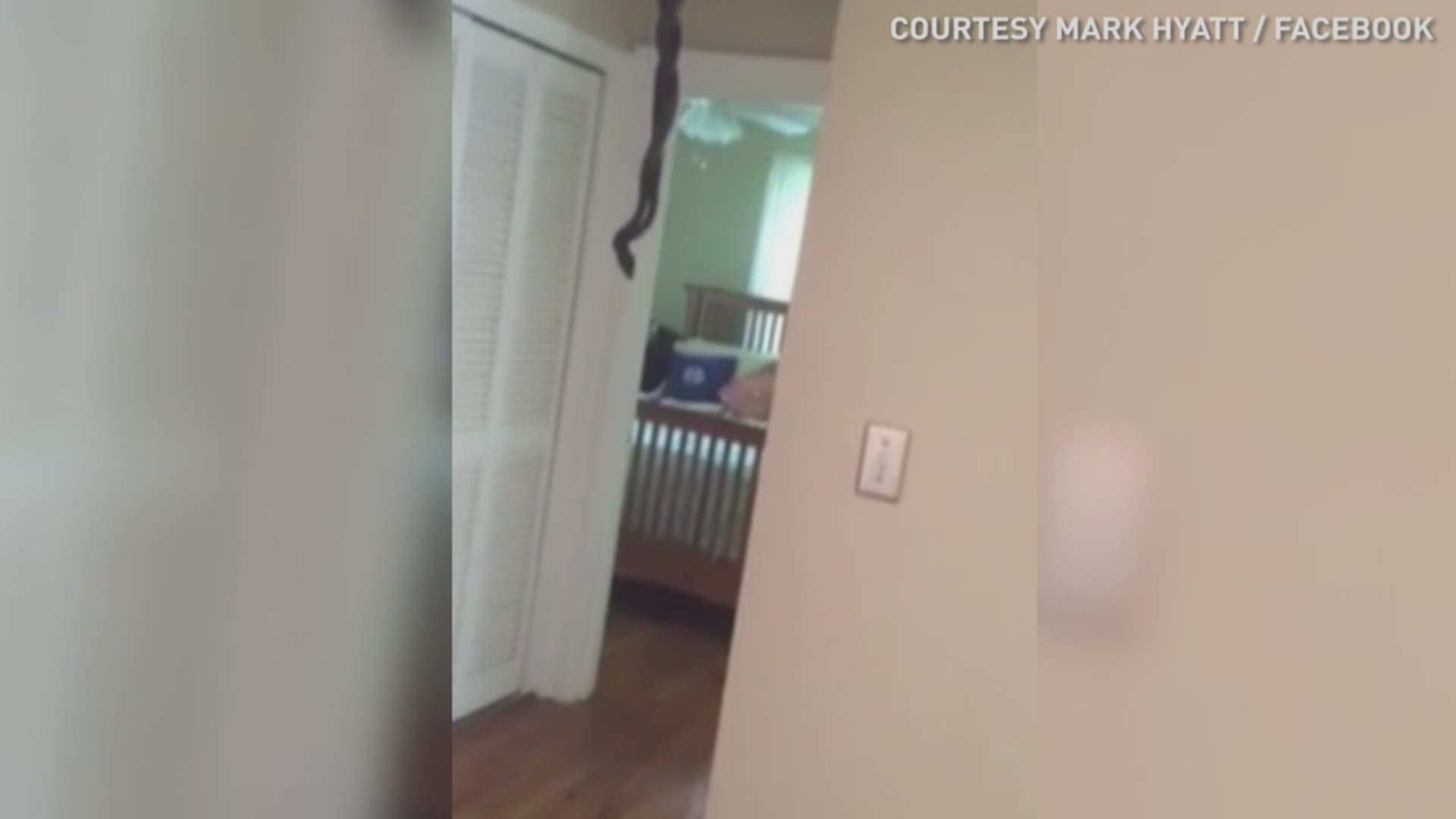 Not only that, but remember the snake that bit the Lowe’s customer? In the video below, his wife shared photos of his injury while he recovered in the ICU. 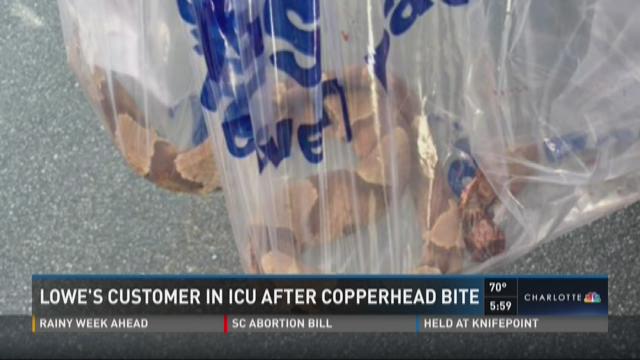 But let's also not forget the city workers in Morganton who found snakes in an electrical box.

NBC Charlotte's sister station, WFMY News 2, went to the Greensboro Science Center to talk to an expert about the differences between Black Rat snakes and Copperheads. Here, Rick Bolling, Curator of Reptiles and Amphibians, answers on how to stay safe this summer.

Q: What’s the major difference between a black rat snake and a copperhead?

A: Black Rat snakes are non-venomous. Copperhead snakes are venomous.

About Black Rat Snakes
Black Rat snakes are the most common snake you may see in your yards at home. It gets to be over 6 to 7 feet long. You’ll notice it’s almost solid black with white under the chin. It’s a fairly docile snake. Their favorite foods are small mammals such as mice, rats and other small rodents. They will climb very easily up into shrubbery, trees, and try to get into birds’ nests. They will eat the eggs or even the young bird. Black rat snakes are really good to have around the yard-- if you don’t mind having snakes nearby. Black rat snakes are egg layers. They can lay 20 eggs or more. They lay their eggs around June or July and it takes only a couple of months to hatch.

About Copperhead Snakes
The copperheads lay theirs towards the end of the summer and usually have 7 to 8 young. They’re in jelly sacks and immediately break out after they’re born. The young snakes are going to be very defensive and on alert for their first bit of food of the summer. This time of year the young snakes come out of hibernation. They’re really active because they want to go ahead and eat. The adults want to shed in their dens and also starting eating and breeding.

Copperheads can be aggressive but they can also be calm as long as you don’t try to harass them in some way. Most snakes will curl up and get into a defensive posture if you get too close to them. If you do get too close, they’ll want to strike. The best thing to do is not get too close. Just get out of their way and walk away.

YOUNG BLACK RAT SNAKES CONFUSED WITH COPPERHEADS
Young Black Rat Snakes
The young snakes are often confused with the copperheads because the young black rat snakes don’t look like the adults. They don’t have the solid black color yet. They are kind of grayish with dark black to brown splotches. They also when you approach them will buzz their tails a little in the leaves. Sometimes you’ll hear that buzzing sound and that’s kind of a defensive measure. We get a lot of calls to the Greensboro Science Center and photos of people who think they have a baby copperhead snake but it’s actually a black rat snake.

Young Copperheads
Copperheads are very common. They are more of a light tan in color with kind of a pinkish brown hourglass patterns. The darker patterns are skinner at the top and go wide at the side. The young copperhead snakes look just like the adults except new hatchlings. The last inch of their tail is a yellowish green color, and that will fade as they shed their skin. After two or three sheds they will not have the yellowish color on the tip of the tail.

Check out these NC Venomous Snakes

Venomous snakes in the Carolinas

Snakes and the environment

Q: Are snakes good for the environment?

A: They are part of the food chain. They help control some of the other pests and animals that could be around in that area. Plus, they’re not venomous so they’re not going to harm people or your dogs or cats you may have at home. They are good for rodent control and other pest control. So they are just part of that cycle of nature that is out in your yard.

Surely you remember this photo. It shows a black snake eating a copperhead. THIS is why you don't kill black snakes.

Copperheads And The Environment
A: With that being said at the same time that doesn’t mean you want to go out and kill a Copperhead if you see it. You know it’s also doing the same thing as the black rat snake. It’s also competing with the food in that same area and working with the chain of command. People can call us at the Greensboro Science Center and ask us how to safely move a copperhead or how to live around where a copperhead has been seen. Cause people do find them in their yards and of course they don’t want their children or pets to get bit. Copperheads are a dangerous snakes. But there’s rarely a fatality with a bite.

Copperhead Summer Warning
A: You do need to be careful especially on warm summer nights. If you’re out taking the trash can out you may want to wear shoes instead of flip flops, take a flashlight. They like to come across the warm pavement at night. And they frequently do that while also looking for food. If you’re working in the yard or garden have a good pair of gloves on. Poke around with a stick before you reach around the mulch pile or a rock landscape. That’s a good place for copperheads to be. We have found five copperheads here already on our property this summer. It doesn’t mean we have an overabundance, but it does mean we’ve have good rain, its warmed up and they’re out. 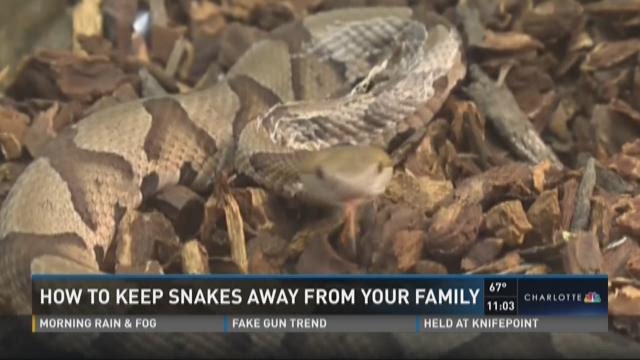 Q: What to do when you see a snake?

A: If you don’t need to go where the snake is at that moment, then just kind of step back and walk away. Just leave it alone and eventually it will go away. If you’re concerned because you have children, or a pet, and you need to relocate the snake, there are a couple of things you can do. For example, with a big black snake you can use a garden rake, and slowly get underneath it to gather it up, and set it in a tall trash can. You can do something similar with copperheads, but it you do, give us a call. The best thing you can do if you see a copperhead in the yard, is not to harass it. Get your children and pets inside. Just wait until it crawls and moves on.

A: If you keep your yard and flower beds taken care of that's a good thing. They don't like to be out in the open much because they’re exposed to predators. So keep woodpiles a little bit further away from the house. Copperheads really like rock and woodpiles and wooded areas. Try to keep the yard mowed and take care of weeds to give them less hiding places. It will also help keep some of their food sources away like rats and mice.

Q: How to keep snakes from getting inside the house?

A: Make sure you have weather-stripping on the bottom of storm doors. Also keep it in any cracks because they can get in. You know garages are going to be a little hard because you’ve got that big door that you have to open and close. And we do get a lot of calls about people who do get snakes inside their garages but it’s usually a black rat snake. You might see a long skin, kind of neutral in color, and that is usually from a black rat snake. A copperhead skin will show an hourglass pattern on the skin. Look around the house for where pipes go in or dryer vents might have a screen in front of them that might be low to the ground where animals can crawl in.

Q: When is snake season?

A: This time of year is a good time of year. They come out of hibernation and it’s warm. Plus they’re breeding right now. When the temperatures are in the mid-80s they’re going to probably try to go under and hide. They’ll be more active in the morning and at dusk or late at night. Copperheads are usually seen at night on warm humid summer nights after the sun goes down. They can be seen out in the yards and crossing driveways.

Q: What to do if you get bitten by a black rat snake?

A: Make sure you have an updated Tetanus shot. Clean the area with some hydrogen peroxide. Must snake bites from a black rat or garden snake will heal up fairly quickly.

Q: What to do if you get bitten by a copperhead snake?

A: What you want to do is especially if you’re bitten by a copperhead in the garden is to take off your rings and watches. Try to remain calm and go ahead and call 911. Don’t do anything to the bite. Just make sure if you’re bitten on the foot take your shoes off.