Hubert Davis delivered emotional remarks when expressing what this new role means to him, and how much former head coaches Dean Smith and Roy Williams taught him. 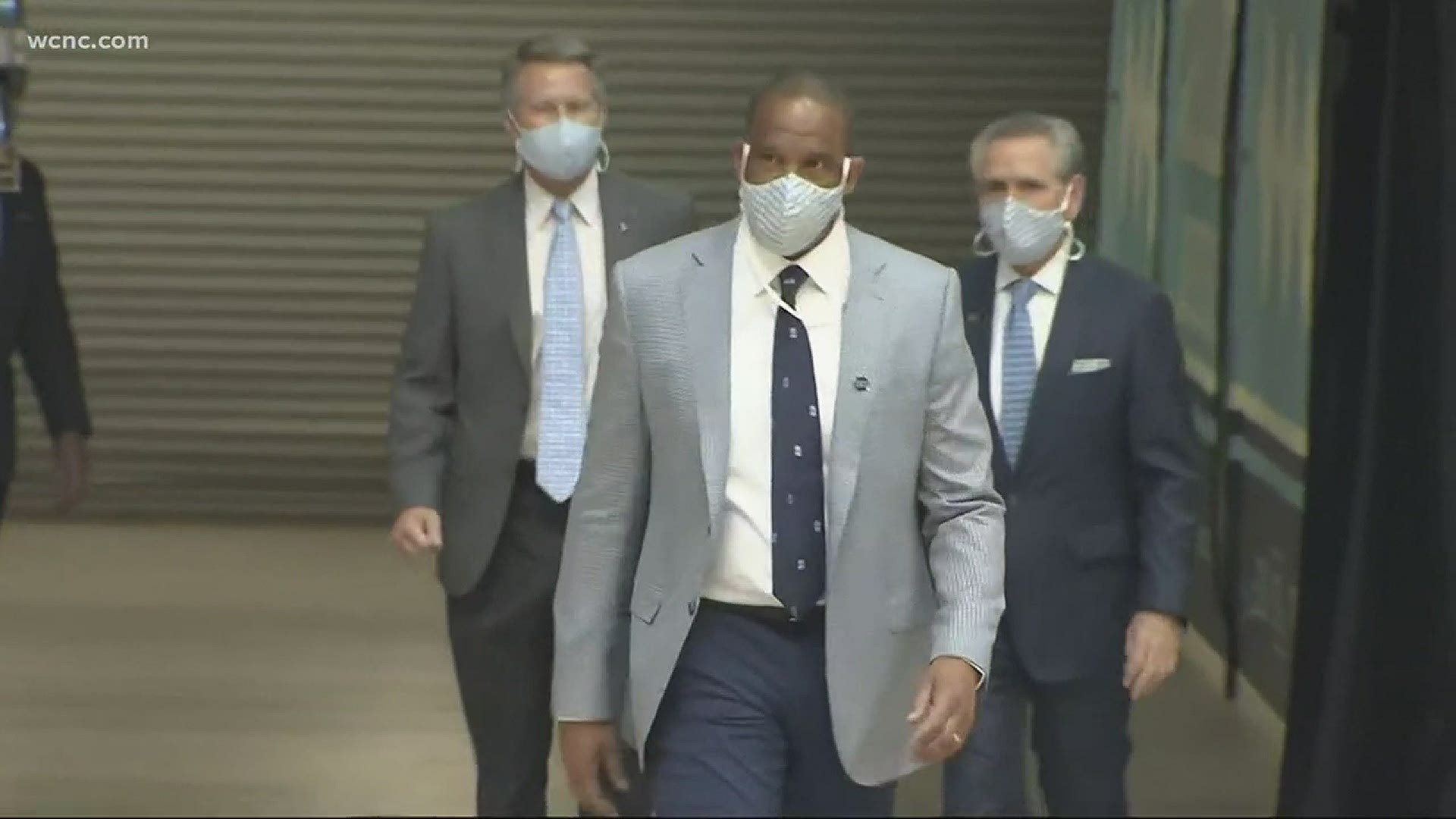 CHAPEL HILL, N.C. — UNC-Chapel Hill formally introduced Hubert Davis as the new men's basketball head coach on Tuesday at the Dean E. Smith Center. Davis was named to replace Roy Williams, who recently announced his retirement. He was an assistant coach under Williams for nine years.

"I'm proud, thankful, humbled, and appreciative of being your new men's basketball coach for the University of North Carolina," Davis said.

Davis reflected on his time at UNC as a player, saying the first time he stepped foot on campus "it felt like home."

He became emotional when speaking about his relationship with Roy Williams. Davis said when he learned Williams would attend his introductory news conference he "had to see him" beforehand, adding that he will miss Williams' presence in the office. He said he will keep existing pictures of Williams hanging up in his new office because he needs "the presence of Coach Williams around [him]."

“I love him to death and am thankful for him giving me a chance. I can’t believe he’s here today," Davis said.

He is a 12-year NBA veteran and a former Tar Heel guard. He’s also a Winston-Salem native.

This is his ninth season as a member of the Carolina basketball coaching staff. His duties included recruiting, bench coaching, and scouting. He has also served as the head coach of the UNC junior varsity team.

“Hubert Davis is the best leader we can possibly have for our men’s basketball program. He teaches student-athletes on and off the court. He inspires his fellow staff members. He is strongly committed to family. He has a tenacious, burning desire to be the best he can possibly be; we witnessed that when he was a player, a broadcaster and an assistant coach – and I have no doubt he will ensure than our student-athletes and program will be the best they can be, as well," Athletic Director Bubba Cunningham said.

In 1987-88, I went with Coach Dean Smith into Hubert Davis’s home. Coach Smith said, ‘I don’t know if you’re ever going to be able to play here, Hubert, and I don’t want to do this.’ I got in the car with Coach and I said, ‘Coach, I think he’ll play more than you think he will because I think he’s so competitive and so driven.’ Hubert told coach Smith, ‘You’ll never know unless you give me a chance.’ Coach Smith a couple days later called him and said, ‘I listened to what you said and I’m going to offer you a scholarship to North Carolina.’ Hubert committed to Coach Smith right then.

Hubert, welcome to that seat as the head basketball coach at North Carolina. You will love it. I will love you sitting there. I will be here cheering. I won’t ever criticize you, I will blame it on the officials. You are the finest young man I’ve ever known in my life. This is hard because I love this program, but you love this program and have the same passion that I do and you’ll be better than me. Congratulations son.

DAVIS AS A TAR HEEL PLAYER

Davis graduated from UNC in 1992 with a degree in criminal justice.

“I love this University. I played here, I earned my degree here, I fell in love with my wife here, I got married here, I moved here after I retired from the NBA and I have raised my family here. I am proud to lead this team, and I can’t wait for all that comes next," Davis said.

DAVIS AS AN NBA PLAYER

The New York Knicks selected Davis in the first round of the 1992 NBA Draft. He played 12 seasons in the NBA, scoring 5,583 points. He is currently third in NBA history in three-point percentage at .441, according to UNC-Chapel Hill.

Davis will become the 19th Head Coach in program history for the Tar Heels.

“I am very pleased that Hubert Davis will continue his outstanding Carolina career as our next men’s basketball coach,’’ Guskiewicz said. “He directly connects our storied past with our exciting future and shows a deep passion for putting our student athletes in the best position to succeed on and off the court. I can’t wait to see him on campus as the face of our men’s basketball program,” Chancellor Kevin Guskiewicz said.