There are new details and a new witness in the case of Asha Degree, the 9-year-old missing for 16 years after vanishing from Shelby. 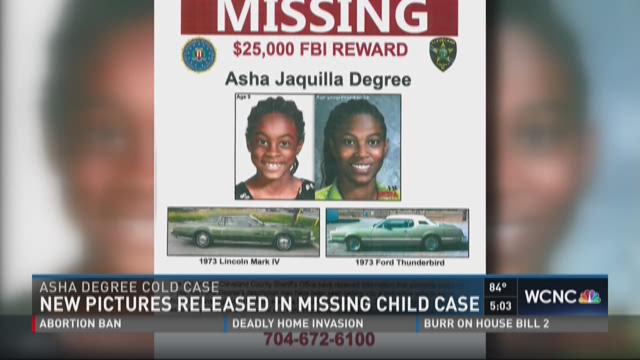 SHELBY, N.C. -- There are new details and a new witness in the case of Asha Degree, the 9-year-old missing for 16 years after vanishing from Shelby.

FBI agents want your help identifying a car that could hold the key to solving this heartbreaking mystery.

It has been 16 years since then 9-year-old Asha Degree disappeared. She was last seen walking on Highway 18 about a mile from her Shelby home.

“We do belive that she’s still alive,” he mom Iquilla has told NBC Charlotte.

Her parents still hold out hope, holding an annual march retracing what they believe were her last steps. Some of her school supplies were found in a barn not long after she went missing, and her book bag was found a year-and-a-half later buried nearly 20 miles from her house.

Now there are new details from the FBI about the car that may have picked her up after a new witness recently came forward.

FBI Spokeswoman Shelley Lynch said, “They believe they may have seen someone matching Asha's description get into a distinctive vehicle the morning she was seen walking on Highway 18 in the Shelby area.”

The FBI released a new poster with age progression photos and pictures of cars similar to what the new witness describes: a dark green, 1970s either Lincoln Mark IV or Ford Thunderbird with rust around the wheel well.

“The eyewitness we've done many interviews with, we've done our own investigative steps with that information,” Lynch adds.The FBI is constantly working on this case, following up on any leads and is regularly in touch with Asha’s parents.Her mom said, “She's the first thing on my mind when I wake up in the morning and the last thing on my mind when I go to sleep at night. She's my child. I will never give up on her. I will never forget about her, and if we don't keep hope and keep her name out why would anybody else do it."Just last year, the FBI re-organized this 16-year-old case, combing through local, state and federal files and putting a new, dedicated team of agents and detectives on the case.There is a $25,000 reward for information.