Officer Tim Purdy says when he sat on the ground to try to calm an autistic, suicidal teen, he never would have imagined that it would turn into a moment that was celebrated worldwide. 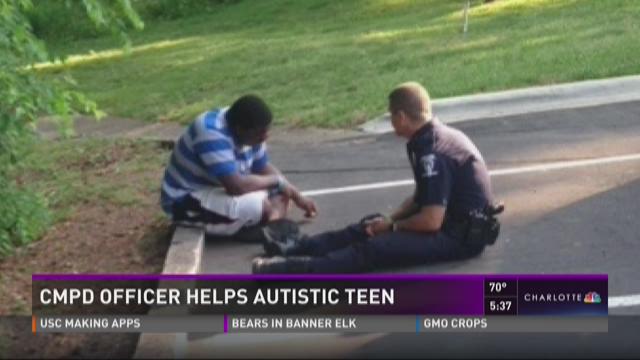 CHARLOTTE, N.C. -- Officer Tim Purdy says when he sat on the ground to try to calm an autistic, suicidal teen, he never would have imagined that it would turn into a moment that was celebrated worldwide.

Purdy is the officer in the photo that has gone viral in the past week, capturing a sweet moment between a police officer and a troubled teen.

Purdy says he got the call about a missing teenager and drove to the scene to see if he could be of help.

When he arrived, he says the teen was sweating and obviously in a heightened state. Two officers flanked the teen. Purdy says they were on the brink of cuffing him and taking him in.

The teen was sitting on the curb in the rear of a church parking lot. Purdy decided to sit with him.

"One of the first things that I did to be honest with you was to get down on his level, take a deep breath and not say anything for a couple minutes."

Purdy says he wanted to be eye to eye with the teen, rather than standing over him.

That gesture helped the teen to slowly relax.

Over the course of the next 30 minutes, Purdy and the teen talked about school, football and family. They also shared some laughs.

When the 18-year-old pulled out some gum, put a piece in his mouth and then started to put the package away, Purdy joked: "That's alright. I didn't want a piece." Purdy says the teen burst out laughing.

Eventually, the teen's mother arrived on the scene. Purdy helped the teen up from the ground and convinced him to go get something to eat and return to school.

Unbeknownst to Purdy, someone snapped a picture of that moment and posted it on Facebook.

That post has now been viewed and shared close to 1 million times.

The 22-year-veteran officer says he doesn't even have a Facebook page.

"I had to have a younger officer show me how to get on CMPD's Facebook page so I could look at it."

Purdy says he is "overwhelmed" by the outpouring of support, but insists nothing he did was out of the ordinary.

"This story isn't about Tim Purdy. This story is about law enforcement around the country," Purdy says. "There are officers who do this every day but we don't hear about it."