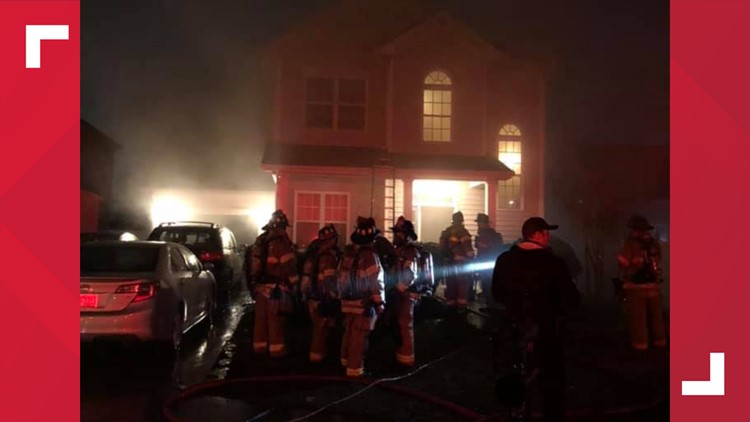 PINEVILLE, N.C. — The Pineville community is rallying around a family after their house was struck by lightning, resulting in a house fire.

The Pineville Police Department and Pineville Volunteer Fire Department quickly responded to the fire. Hilary Jauregui said she was the last one in the house, and she remembers a police officer running upstairs to get her.

"I'm really grateful for that," she said.

Jauregui said despite the late hour, the community jumped into action right away.

"As soon as the fire trucks came in and neighbors heard yelling, everybody just rushed out and offered their home for us to stay, brought blankets because it was pouring rain," Jauregui said.

Jauregui said their neighbors used the Nextdoor app in an effort to reach out to the local community, asking for help for the family. The response was much greater than anyone expected -- people from all over the area started donating blankets, gift cards, food, clothes.

"They've been just so supportive," Jauregui said. "Both with items that they've been donating to us and just keeping us in their prayers and just being there and offering their homes for us to be in."

Jauregui said people from neighborhoods she had never even heard of started reaching out to her.

"Just knowing that we have this kind of support system behind us is helping a lot," she said.

Her 10-year-old brother and 13-year-old sister have both missed school the past few days because they no longer have school uniforms, but Jauregui said they are returning to school Thursday.

While their home wasn't totally destroyed, internal damage has it unlivable. The family of five is now living in a hotel for the next several weeks before moving to a temporary apartment. A GoFundMe was created to help the family cover living expenses as they work to get back on their feet.

"It's amazing and unbelievable to think that somebody that doesn't know you will donate this much and just care so much about you and your family's well-being," Jauregui said. "There aren't enough words to express how thankful my family and I are for that."