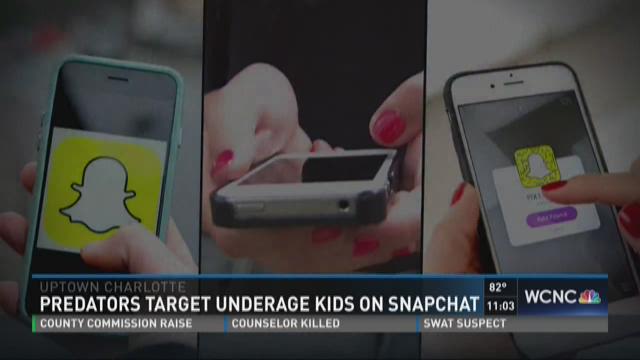 This week a man was arrested for sending naked pictures through Snapchat to an underage girl. Patrick Poling is facing nearly 20 criminal charges after allegedly sending nude pictures to a 14 year old girl via Snapchat.

According to the arrest warrant, he sent photos of himself in a dozen different poses and fully exposed.

"A lot of people at my school use it," said Ava Wiatrowski, a 6th Grader.

"Kids my age like 12 and 13 year olds they'll have friends on there that are like 20 or 25," said Wiatrowski. "I don't even think their parents know."

Wiatrowski said kids at her school will sometimes delete the app before they get home to hide what they're sending socially from their parents, but before they get to school the next day.

"And then they'll re-download it again," said Wiatrowski.

Todd is an elementary school teacher. Her son is in the second grade and he isn't allowed to the app, but a lot of her students are.

"How old are these kids?" NBC Charlotte's Xavier Walton asked.

"Between 8 and 10 years old these kids are very young," Todd responded. "They love Snapchat it's the biggest rage in our school."

What's meant to be fun- Snapchat, if used inappropriately, can open the doors to danger which is something Jordan deals with daily.

"There are predators everywhere," said Todd. "There are bullies every where and you don't know who your child is connecting with."