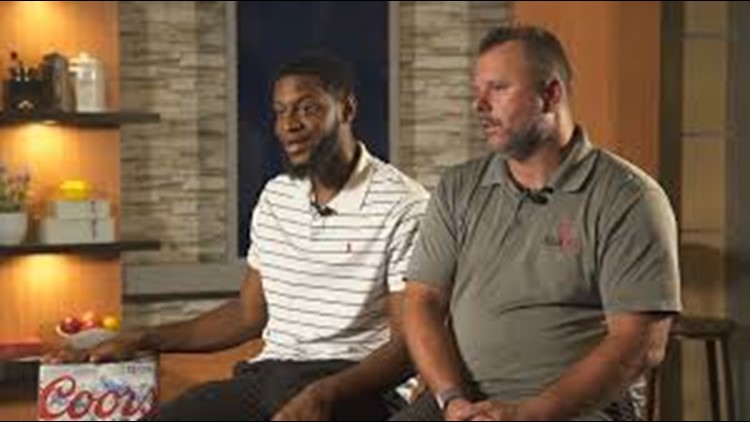 Suicide attempt foiled by 2 men and a 12-pack

ST. PAUL, Minn. - While delivering beer, Kwame Anderson and Jason Gabel tapped into something unexpected. They used a case of beer to foil a suicide attempt.

Anderson and Gabel said they saw a man standing out the outer fence of the Earl Street bridge over I-94 near St. Paul on Wednesday morning. Anderson and Gable say the man told them "I am going to commit suicide. Watch me fly."

Gable, who was driving, stopped the car, jumped out and called 911. Anderson approached the man and told him he didn’t need to jump.

The man, who he learned is a Chicago native and father of two, questioned Anderson’s sincerity.

“You don’t know me, you don’t care,” the man contemplating ending his life said.

Anderson kept talking and began negotiating, recalling a scene from a movie where Denzel Washington played the role of a negotiator.

“I was thinking, I got to build a rapport and give him all of his demands. But first I got to get to know him, so I asked him his name and where he was from.”

The conversation continued. Anderson tried everything to lure the man from the bridge.

Then, Anderson asked the man who identified himself as a father of two if he “wanted to have a drink?”

“Then when he said 'maybe,’ I was like officers, keep him occupied. I will be right back,” Anderson said. “I ran to the truck and grabbed a case of Coors Light. Came back with a 12 pack and started talking to him again. I said if you come down off that ledge, this whole pack is yours.”

Turns out, Anderson and Gabel were in the right place at the right time. Gabel took a wrong turn.

“I don't know why I did this. I take a left and I go toward the bridge but usually we always go straight,” Gabel said. “We have a route that we do every Wednesday and that wasn't the way I would normally go. It wasn't part of the plan, but it was God's plan.”

Plus, Kwame wasn't supposed to deliver beer that day. He was supposed to start his new role in the sales department of Breakthru Beverage.

Instead, he helped a man on the verge of ending his life --- breakthrough a rough moment.