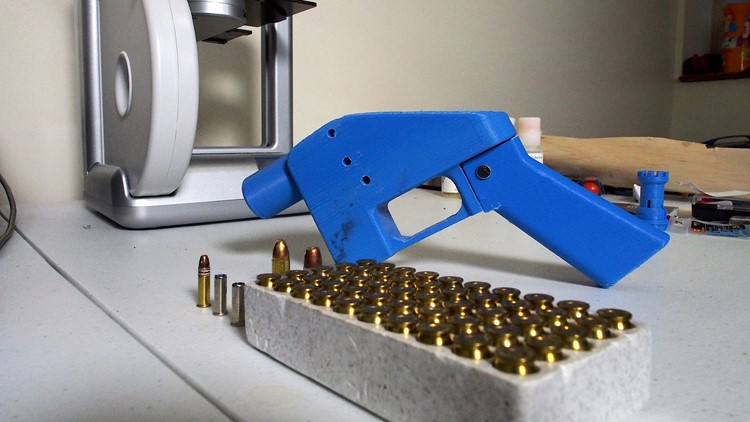 Photo by: AFP / Getty Images
A Liberator pistol appears next to the 3D printer on which it was made. The single-shot handgun is the first firearm that can be made entirely with plastic parts with a 3D printer and computer-aided design (CAD) files downloaded from the Internet.

An AR-15 made at home? With 3D printing, 'the downloadable gun' becomes available August 1

Americans will soon be able to make 3D-printed guns from their home, widening the door to do-it-yourself versions of firearms including the AR-15 — the gun of choice in American mass shootings — that are untraceable with no background check required.

A settlement earlier this year between the State Department and Texas-based Defense Distributed will let the nonprofit release blueprints for guns online starting Aug. 1, a development hailed by the group as the death of gun control in the United States.

"The age of the downloadable gun begins," Defense Distributed stated on its site. Its founder, Cody Wilson, tweeted a photograph of a grave marked "American gun control."

The plans freely available next month put firearms clicks away from anyone with the right machine and materials. That reality has startled gun control advocates, who say it makes untraceable firearms all the more available.

For Wilson, August marks the end of a years-long legal battle: He designed a 3D-printable plastic pistol, the "Liberator .380," in 2012 and put the plans online. It was downloaded more than 100,000 times before federal officials blocked his site, citing international export law.

A lawsuit from Wilson followed. The State Department settled in June.

The Second Amendment Foundation, a nonprofit that partnered with Wilson in the lawsuit, put out a statement calling the settlement "a devastating blow to the gun prohibition lobby."

Assembling guns at home isn't new. It can be done legally, too, provided the made-at-home gun isn't sold. Defense Distributed already sells parts that let users build their own untraceable firearms, known as "ghost guns" for their lack of serial numbers.

"Legally manufacture unserialized rifles and pistols in the comfort and privacy of home," one product's description states.

David Chipman, who worked 25 years as an agent with the Bureau of Alcohol, Tobacco, Firearms and Explosives, told Vice News that the homemade guns favored by hobbyists have since become popular with criminals.

“Now, criminals have started using ghost guns as a way to circumvent assault weapon regulations," said Chipman, now an adviser to the gun control advocacy group Giffords. "I imagine that people will also start printing guns to get around laws.”

Gun plans previewed on Defense Distributed's website feature the Liberator pistol along with an AR-15 and a VZ-58, a Czechoslovakian assault rifle.

The printers needed to make the guns can cost from $5,000 to $600,000, according to Vice News. The quality of plastic matters, too: An early design printed by federal agents shattered after one shot. A second gun, made from a higher grade resin, stayed intact.

William Bones, the chief of police in Boise, Idaho, told the Idaho Statesman that law enforcement agencies have followed developments in 3D-printed guns for "quite a while now."

“Measures are needed to ensure these weapons are safely built and to prevent access by children or those prohibited from owning a firearm," Bones told the newspaper.

"Hopefully we see some safe and responsible legislation soon as well as manufacturers taking measure to prevent access which might lead to tragedy.”