The story has quickly garnered national attention. Jeremy Onitreb took to Facebook and organized an event in support of the cheerleaders. 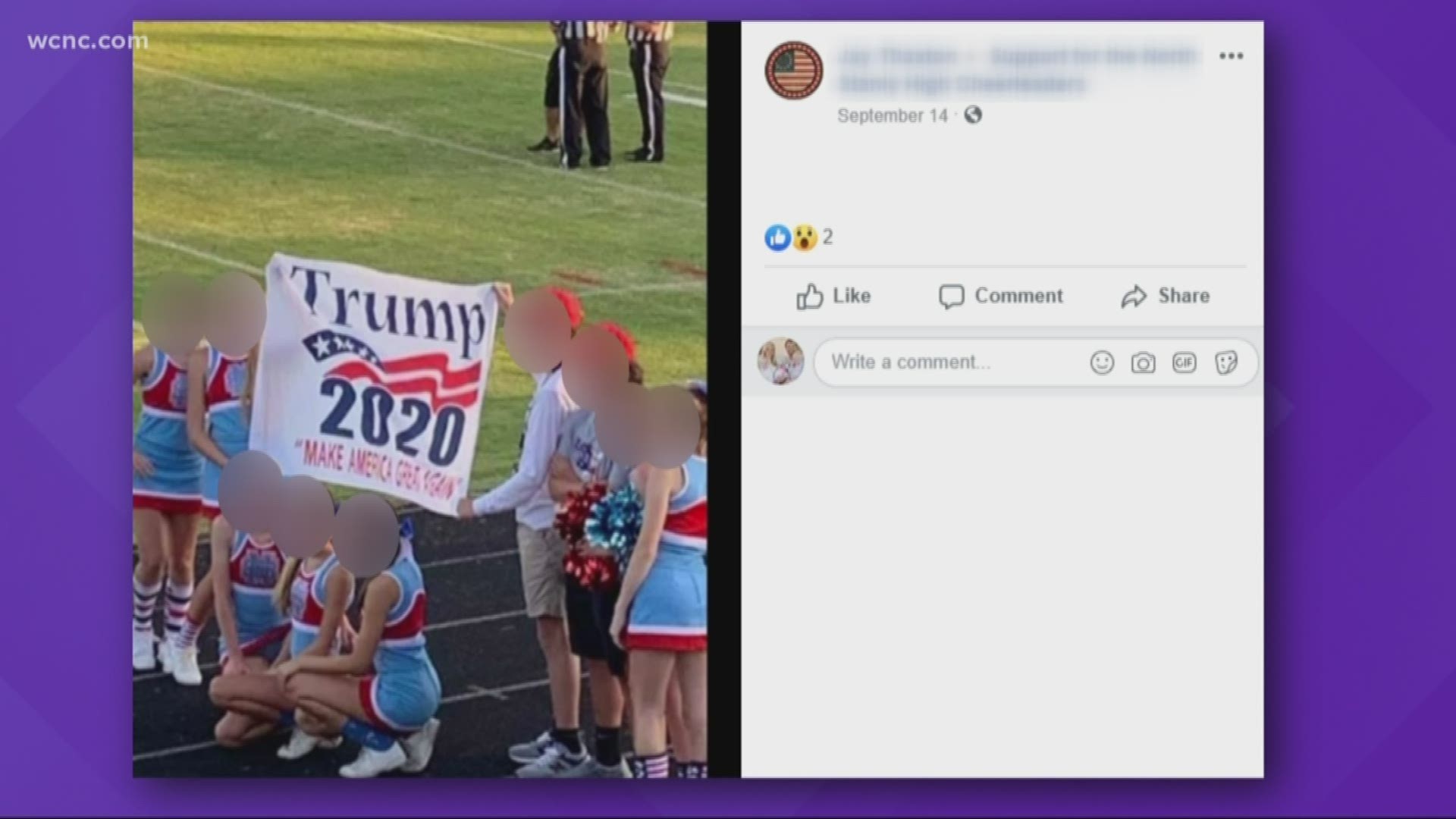 STANLY COUNTY, N.C. — Cheerleaders from a North Carolina high school have been placed on probation after holding up a “TRUMP 2020" banner at a home football game last month.

It all happened Friday, August 30, at North Stanly High School, located roughly 48 miles northeast of Charlotte. Students said it was Red, White and Blue night for the football team.

“It was just what came to our mind when we thought of the United States of America,” said student Carson Palmer, who brought the flag down near the field before the game.

That’s when Palmer said he and his buddy, Matthew Mangham, both juniors at the school, had stopped to snap a picture with a group of cheerleaders. The students said they thought nothing of it until a few days later when they were called in to talk to their principal.

After investigating, the Stanly County Board of Education said the students violated Policy Code: 2055 DISTRIBUTION OF PUBLICATIONS BY NON-SCHOOL GROUPS, which says:

In order to minimize disruption to the learning environment, political campaign materials may not be distributed to students or employees (including through employee mailboxes and e-mail) or made available on school grounds during school time or at school events. However, on election days, posters and printed materials are permitted at school buildings used as polling places in accordance with state law and board of elections requirements. 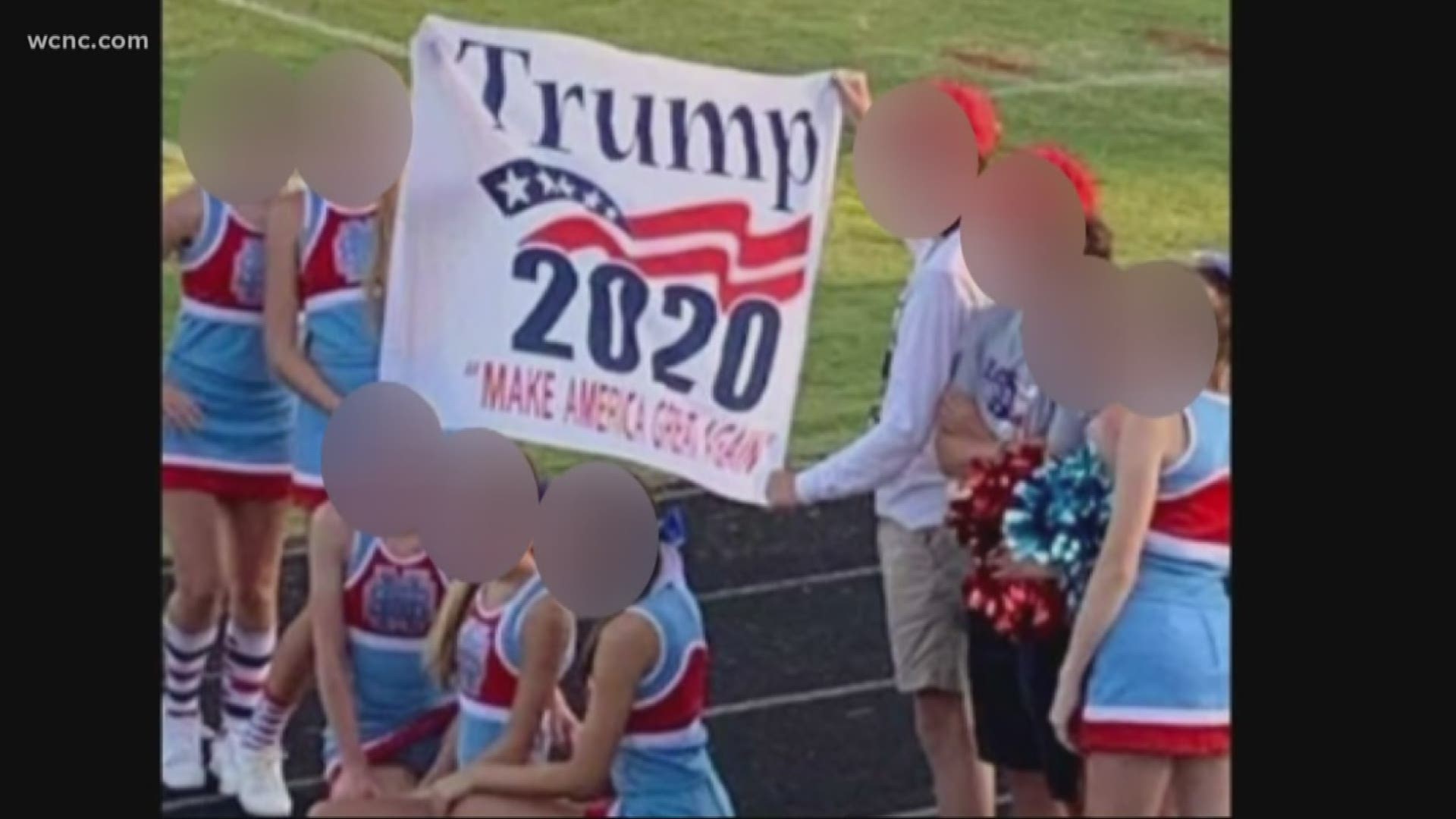 Officials said the policy does not prohibit students from speaking their minds or engaging in protected First Amendment activities, but because the cheerleaders were in uniform and were acting as representatives of the school, the display of the sign could be perceived as the school or school system endorsing a political campaign, which is prohibited.

Board of Education officials said, ultimately, they decided that no disciplinary action needed be taken but did ask the students not to display the flag again.

"Our families are being targeted, and you know, it's scary."

Upon becoming aware of this matter, the North Carolina High School Athletic Association placed the cheerleading squad on probation for the remainder of the football season.

In an interview with the Stanly News and Press, NCHSAA commissioner, Que Tucker said, “One of the rules we have is that every contest should be conducted in a wholesome, athletic environment. We take that to mean that it’s in an environment where good sportsmanship is shown, where people feel safe…that respect for all people participating is being shown.”

Due to the fact the incident caused concern for many and helped create a negative athletic environment, according to Tucker, the NCHSAA decided to reprimand the cheerleaders by putting them on probation, the article said.

So what does the probation mean for the cheerleaders? Stanly County Board of Education officials said they’ll be allowed to cheer.

NCHSAA probation, in and of itself, is not a punishment. It serves as a notice of behavior or action that is against NCHSAA Handbook Policy or contrary to expectations of sportsmanship and proper behavior. Should probationary infractions persist at a member school or within a team at a member school, additional sanctions such as fines or suspensions could be implemented.

The story has quickly garnered national attention, including catching the eye of Jeremy Onitreb, who quickly took to Facebook and organized an event to support the cheerleaders.

On the event’s page, Onitreb wrote: “Please come out and help me show the school and the NCHSAA that freedom of speech is not dead. Please bring all your Trump and MAGA gear and let's throw our support behind the North Stanly High School cheerleaders.”

He’s asking anyone who plans to attend to join him across the street from the school Friday evening before the school’s football game against Jesse Carson.

“I’d love to line the street so that everybody going into the game goes to the biggest Trump rally they’ve ever been to, that would be phenomenal,” he said in the video.

As of Monday evening, close to 800 marked they’re "interested" in attending.

The Stanly County Sheriff’s Office says they plan to have added security at the game to make sure that anyone who wished to attend feels safe.

Stanly County Board of Education officials said the NS Youth League, a group planning to participate in on-field festivities at Friday night’s game, will be rescheduling.

Cheerleaders in Arkansas were also criticized for holding a MAGA banner.