The president's son spoke at an "Evangelicals for Trump" rally at City Church in Huntersville, where faith leaders sought to rally Trump's base. 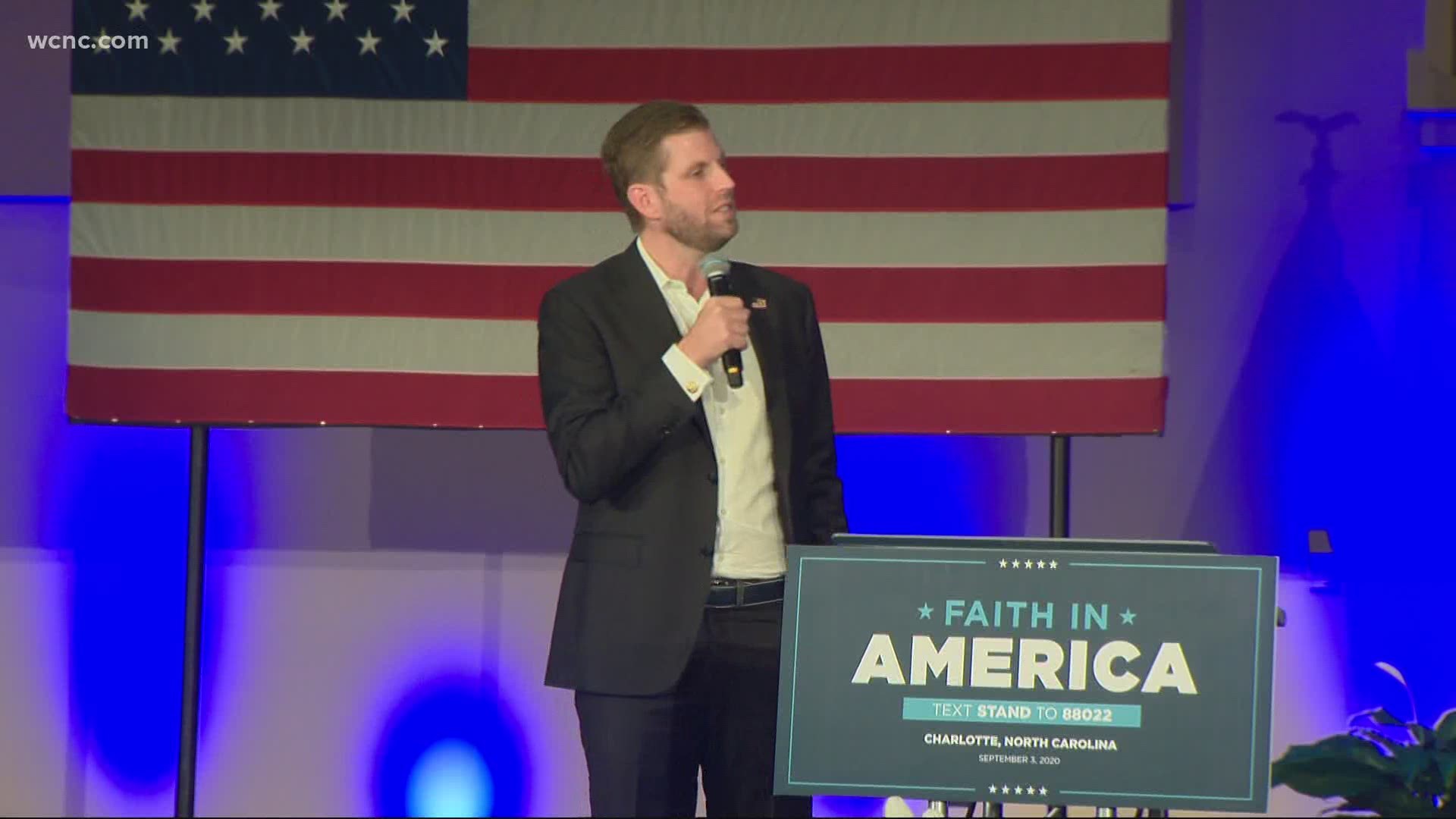 HUNTERSVILLE, N.C. — With about 60 days to go until the November election, the political campaigns are ramping up visits across the Tar Heel State. Eric Trump, President Donald Trump's second son, was in Huntersville Thursday to help stir up the president's base.

City Church Huntersville hosted an "Evangelicals for Trump" rally, where Eric Trump spoke, along with several faith leaders, including the president's faith advisor Pastor Paula White. Journey keyboardist Jonathan Cain, White's husband, also made an appearance to perform one of his worship songs.

Supporters filled the lower sanctuary of the church for the three-hour event. Staffers spaced groups out within rows, and asked people to wear masks, per state law. Some rally-goers complied, while many did not. During the program, speakers asked people again to mask up, if possible.

“Evangelicals for Trump” rally is kicking off at City Church in #Huntersville. Eric Trump and Pastor Paula White are expected to speak. Here’s a look inside as things get started. @wcnc pic.twitter.com/nvclmOyPbp

During his speech, Eric Trump railed against the Democrats, who he accused of trying to remove "Under God" from the Pledge of Allegiance during the Democratic National Convention, a statement the president has also made and has since been fact-checked.

RELATED: President Trump distorts that Democrats left 'Under God' out of Pledge

.@EricTrump: “They (Democrats) are the party of the atheists.” @wcnc pic.twitter.com/UiowEyFH72

Trump also said some of the nation's problems stemmed from the erosion of values.

"What does that say about the nuclear family? We need more of that, and we need more people going to church as a family together on Sunday," Eric Trump told rally-goers.

After the event, in an exclusive one-on-one with WCNC Charlotte, Trump addressed criticism of the president's comments about mail voting while on a visit Wednesday to Wilmington.

Regarding mailing in one's ballot, the president said, "You send them in, but you go to vote, and if they haven't counted it, you can vote. So, that's the way I view it."

The statement drew a strong response from many, including North Carolina's Attorney General Josh Stein.

"To go and try to vote a second time as a way to test the system is a felony in North Carolina. Do not do that," Stein said.

"I think my father's message is spot on. Vote absentee, but then, actually go to make sure your vote was processed. Track it, as you can with many states including this one," Trump said. "Make sure there's no funny business in the process."

The president's campaign has also hammered out a message of law and order, claiming the Biden-Harris ticket is an enemy of the police.

However, Joe Biden has hit back, saying the Trump administration wants to cut a half-billion dollars in police funding. PolitiFact rates this claim as "mostly true," writing the administration is proposing cuts to the Justice Department and Community Oriented Policing Services, but said it would also be hard to tell how much of that money would have directly gone to law enforcement agencies.

"My father is the one person who stands behind the men and women in blue, and that's why every police federation, every trooper, every sheriff's group in this country has endorsed him," said Eric Trump.

On Thursday, Vice President Mike Pence was in Raleigh where he and Trump picked up the endorsement of the Southern States Police Benevolent Association.

Would anything change in a second term?

"No, I think he's done a phenomenal amount," Trump replied.

Thursday, Joe Biden was in Kenosha, Wisconsin, where he visited with the family of Jacob Blake.

Just this week, however, he told Raleigh's ABC11 he plans to visit North Carolina in the "not-too-distant future," but was trying to avoid bringing together large crowds and wanted to follow the state's gathering limitations.