RNC: 'No final decision has been made' on moving convention from Charlotte 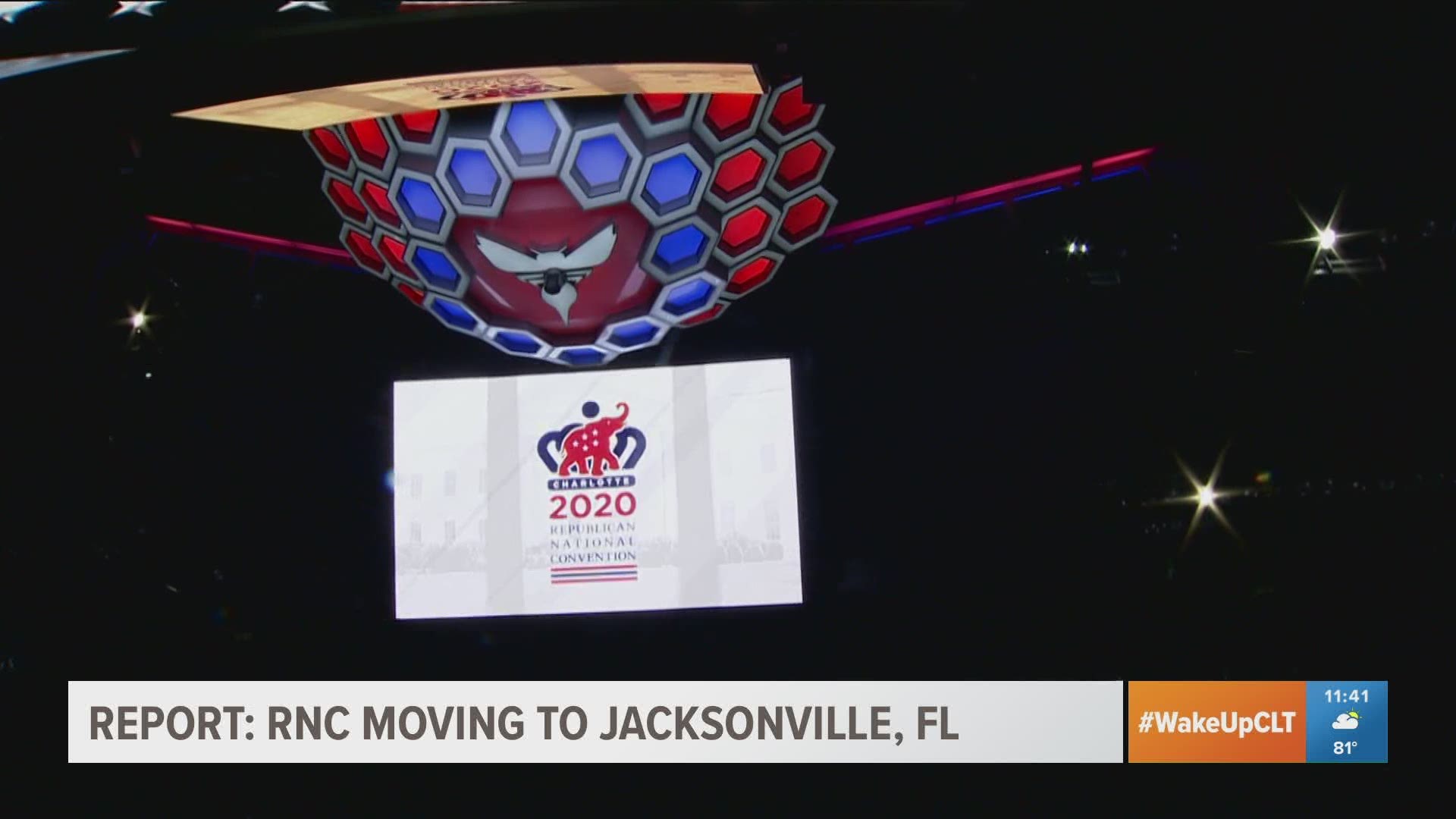 CHARLOTTE, N.C. — A spokesperson for the Republican National Committee is backing away from reports that the committee has chosen Jacksonville as the new site for its August convention, saying “no final decision has been made.”

The Washington Post reported Wednesday that convention leaders “tentatively selected” Jacksonville as the new destination for the RNC, uprooting it from Charlotte this August. The article cited three Republican leaders with inside knowledge.The article prompted a swift, strong response from the Charlotte Host Committee.

A spokesperson for CLT Host 2020 telling WCNC Charlotte, “Though there have been some conversations about business meetings being held in our city, nothing has been confirmed to us. This decision is in clear violation of the agreements made with the City of Charlotte, the County of Mecklenburg, Charlotte Regional Visitors Authority, and the Charlotte Host Committee.”

The City of Charlotte issued the following statement Wednesday:

"The City Attorney and members of his staff have been meeting regularly with the legal representatives of the Republican National Committee and other parties to the convention agreements. The City of Charlotte remains willing to work in good faith to complete its contractual obligations under the terms of the two Convention agreements. The City has not been officially informed of the RNC’s intent to relocate the convention. Considering the media reports of the RNC’s apparent unilateral decision to relocate a substantial portion of the convention to Jacksonville, an immediate discussion with the RNC and our partners regarding contractual obligations and remedies resulting from this apparent decision is required."

Tatum Gibson, a spokesperson for the RNC, denied the reports.

“Several cities are still being considered. No final decision has been made,” Gibson said. “Convention officials are touring Phoenix, Savannah, Dallas, and Jacksonville this week, and we have been in conversations with several other potential locations.”

President Donald Trump announced his intentions to take the RNC to another location after pressuring Governor Roy Cooper to give the committee guarantees that they can host 20,000 people in the Spectrum Center on nominating night. The President also sought assurances that there would be hotel capacity, restaurants and bars would be able to cater to tens of thousands of additional people who would likely descend upon Charlotte.

Cooper refused to give the President those assurances 80 days before the convention date, calling for the RNC to provide the state with plans for a “scaled down” event. Cooper, citing concerns about Coronavirus, says the RNC did not produce a plan that included social distancing or face masks.

Congresswoman Alma Adams previous called leaders in the Republican party “irresponsible” for their current plan. Wednesday, Adams doubled down on that message.

“For two weeks, people across our country have come together with one voice to say Black Lives Matter,” Adams said. “During this time, President Trump has been more concerned about the size of his crowds than listening to the American people. The president’s decision hold a large gathering without social distancing or facemasks tells me that NO lives matter to him, not even those of his supporters.”

A convention official insists that “all convention business will remain in Charlotte. But because of the restrictions presently in place by the Governor, the President’s acceptance of the nomination (the celebration) will have to take place elsewhere.”

Supporters of the RNC remaining in Charlotte point to the potential $150-200 Million economic impact the convention was expected to bring. A statement from CLT Host 2020 says if the convention leaves, “unfortunately, this action most directly impacts our hospitality and tourism partners, small businesses, and vendors counting on the economic impact of the promised events.”

North Carolina remains in Phase 2 of its reopening plan. Under the current phase, there is a maximum of 10 people allowed to gather at indoor events.