Some NC voters are receiving unsolicited absentee ballot request forms in the mail. Here's why.

The Center for Voter Information recently mailed 1.8 million absentee ballot request forms to voters across North Carolina, but not every voter received one. 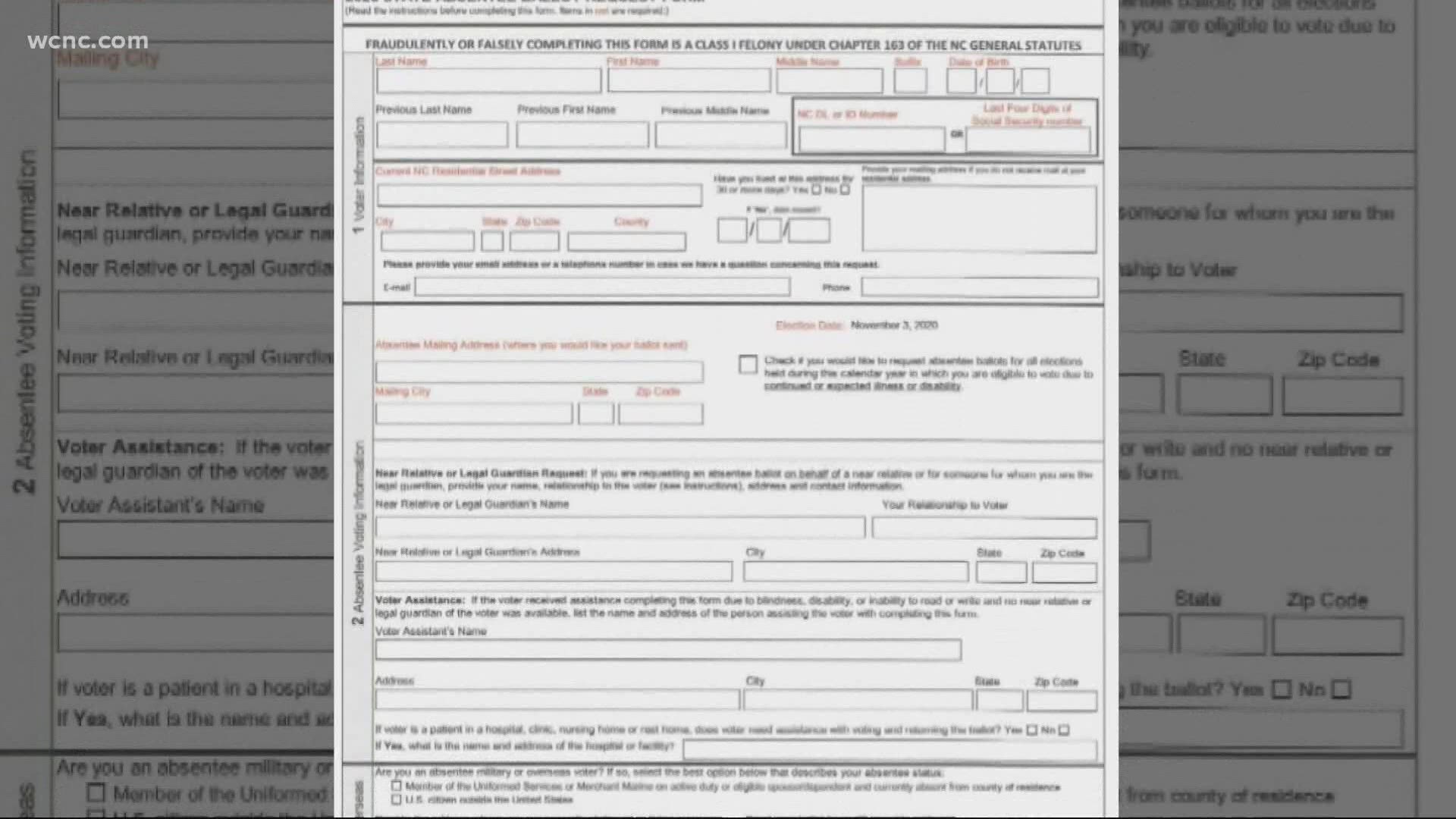 UNION COUNTY, N.C. — In the midst of the pandemic, with Election Day looming, a Washington, DC non-profit is flooding North Carolina voters with absentee ballot request forms and the unsolicited forms are only arriving in certain voters' mailboxes.

"It sort of bothered me," Roland White of Union County said. "It's a little bit like somebody giving you a ride to the polls and giving $5 on the way and they don't tell you what to do with it, but there's a little subtle pressure."

When White recently opened his mailbox, the Center for Voter Information hoped he would fill out the absentee ballot request form the non-profit provided and then mail it using an already addressed and stamped envelope to the Union County Election Office. However, the longtime registered democrat didn't take the mailer at face value. In fact, the more he questioned the surprise delivery, the more he learned. For one, he said his wife did not receive one. He thinks that's likely because she's a registered republican.

"We were registered in two different parties," he said with a laugh.

He later learned his neighbor's husband also received one, which was especially odd considering the circumstances.

"He passed away several years ago," White said.

At first glance, the mailer looks official, but "Center for Voter Information" is plastered across the top and at the bottom, there's a disclosure that the non-profit is not affiliated with any state or local election officials.

Further research shows the North Carolina State Board of Elections called out CVI just two months ago for breaking a new state law, mailing the same absentee ballot request forms, but that time with each voter's personal information already filled out.

Page Gardner, the organization's founder, said CVI believed it was complying with the new law and even received assurances from the state.

"We took all corrective action," Gardner said. "We were very transparent about what we did."

Nevertheless, now in full compliance and after again giving the election board a heads up, CVI mailed out 1.8 million blank request forms across North Carolina.

"Our vote by mail programs are really, really essential, because we are bringing democracy to people's doorsteps," Gardner said. "We focus on the most marginalized communities, which is unmarried women, persons of color and young people. What we are trying to do is make sure more and more people can vote in a safe and healthy way and close the gap of those who can vote and those who do vote."

The founder of the non-profit calls North Carolina home. Voting records show Gardner is a registered democrat. She is adamant her non-profit is non-partisan and said political party is not a factor in who receives a form in the mail.

"I don't think it does the organization any good to respond to mischaracterizations. We know what we do. We know we're non-partisan," she said. "We don't look at party when we mail things out and we never have."

A spokesperson for the state election board confirms the latest applications are legal and can be used to request absentee ballots. However, election officials have warned unsolicited attempts to get people to vote "can be confusing or frustrating for voters and erode confidence in elections."

"As the election approaches, voters will receive many kinds of mailings, phone calls, emails and text messages from third party groups," she said in a video. "In some cases, these outreach efforts may confuse or mislead voters, but in most cases, they are legal attempts to encourage voter participation in an important election."

Left with too many questions, White plans on taking the state's advice.

"You just wonder, if it's legitimate, who's behind it? Why some people get it and why others don't?" White said. "If I want an absentee ballot, I'll request it myself and pay my own postage. I just don't feel like I ought to have somebody sending the request unsolicited and paying the postage."

CVI prides itself in having helped register more than 4.6 million voters across the country since 2003.