"I think in some cases they hate our country," Trump said to the crowd in North Carolina, a swing state he won in 2016 and wants to win again next year. 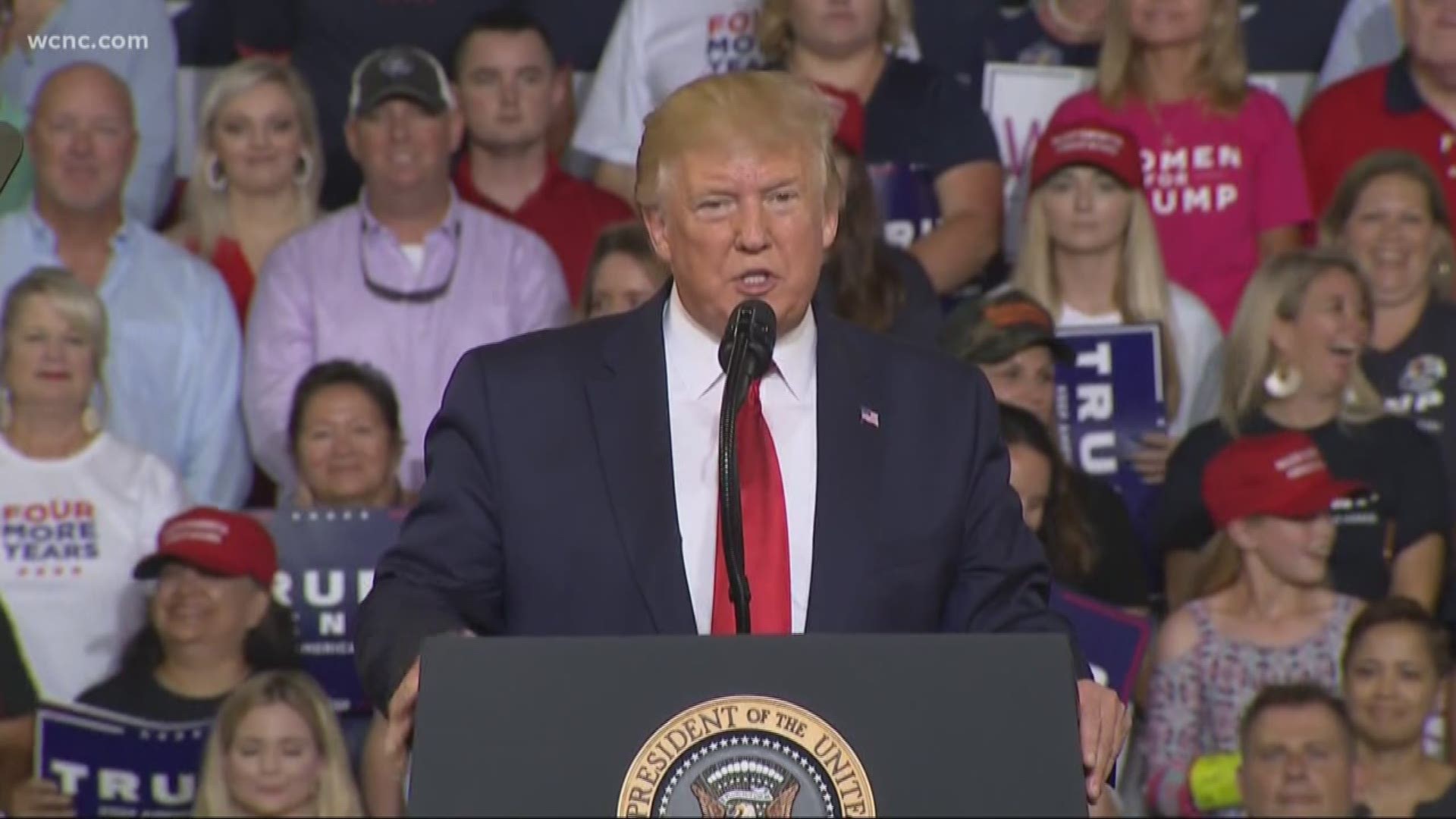 GREENVILLE, N.C. — A combative President Donald Trump rallied Republican supporters Wednesday in North Carolina, harshly criticizing four fiery, left-wing congresswomen of being un-American and claiming they are the face of the Democratic Party that will ruin the country.

"I think in some cases they hate our country," Trump said to the crowd in North Carolina, a swing state he won in 2016 and wants to win again next year.

Trump's jabs were aimed at the four freshman Democrats, self-described as "the squad," who have garnered attention since their arrival in January for their outspoken liberal views and distaste for Trump: Reps. Alexandria Ocasio-Cortez of New York, Ilhan Omar of Minnesota, Ayanna Pressley of Massachusetts and Rashida Tlaib of Michigan. All were born in the U.S. except for Omar, who came to the U.S. as a child after fleeing Somalia with her family.

Trump recently tweeted that the Democratic congresswomen of color should "go back" to their home countries — though three were born in the United States. Trump has accused the four of "spewing some of the most vile, hateful and disgusting things ever said by a politician" and has told them, "If you hate our Country, or if you are not happy here, you can leave!"

When he named them at Wednesday's rally, the crowd booed and launched into chants of "Send her back!"

Before he left Washington, Trump said he has no regrets about his ongoing spat with the four. Trump told reporters he thinks he's "winning the political argument" and "winning it by a lot."

Trump's harsh denunciations were another sign that the nation is in store for a combative presidential election.

His speech was filled with Trump's trademark criticisms about the news media, which he says sides with liberals, and special prosecutor Robert Mueller's Russia probe. Mueller had been scheduled to testify Wednesday on Capitol Hill, but it was postponed. Trump brought him up anyway. "What happened to me with this witch hunt should never be allowed to happen to another president," he said.

He also talked about illegal immigration, a main theme of his first presidential bid that is taking center stage in his reelection campaign. He brushed off the criticism he has gotten for saying that the congresswomen should go back home. "So controversial," he said sarcastically.

The four freshmen have portrayed the president as a bully who wants to "vilify" not only immigrants, but all people of color. They say they are fighting for their priorities to lower health care costs and pass a Green New Deal addressing climate change, while his thundering attacks are a distraction and tear at the core of America vales.

The Democratic-led U.S. House voted Tuesday to condemn Trump for what they considered "racist comments," despite near-solid GOP opposition and the president's own insistence that he doesn't have a "racist bone" in his body.

Trump hasn't shown signs of being rattled by the House rebuke, and called an impeachment resolution that failed in Congress earlier in the day "ridiculous." The condemnation carries no legal repercussions and his latest harangues struck a chord with his die-hard conservative base. Trump's comments about it in Greenvilleonly fired up the crowd, whose chants of "Four more years!" and "Build that wall!" bounced off the rafters.

Trump was greeted in an arena at East Carolina University by supporters, many sporting red-white-and-blue outfits and waving "Trump 2020" and "Women for Trump" signs. Vice President Mike Pence was first up after spending the day in Fayetteville, North Carolina, and visiting troops at Fort Bragg.

It was Trump's sixth visit to the state as president and his first 2020 campaign event in North Carolina, where he defeated Democratic nominee Hillary Clinton in 2016.

"From sparking a harmful trade war that puts our farmers in the crosshairs, to giving corporations a billion-dollar giveaway at the expense of our middle class, to repeatedly pushing to end protections for pre-existing conditions and raise health care costs, his broken promises have hurt hard-working families across North Carolina," Goodwin said.