A list of businesses that people should boycott after donations to Trump’s campaign has gone viral on social media. The VERIFY team has confirmed it is inaccurate. 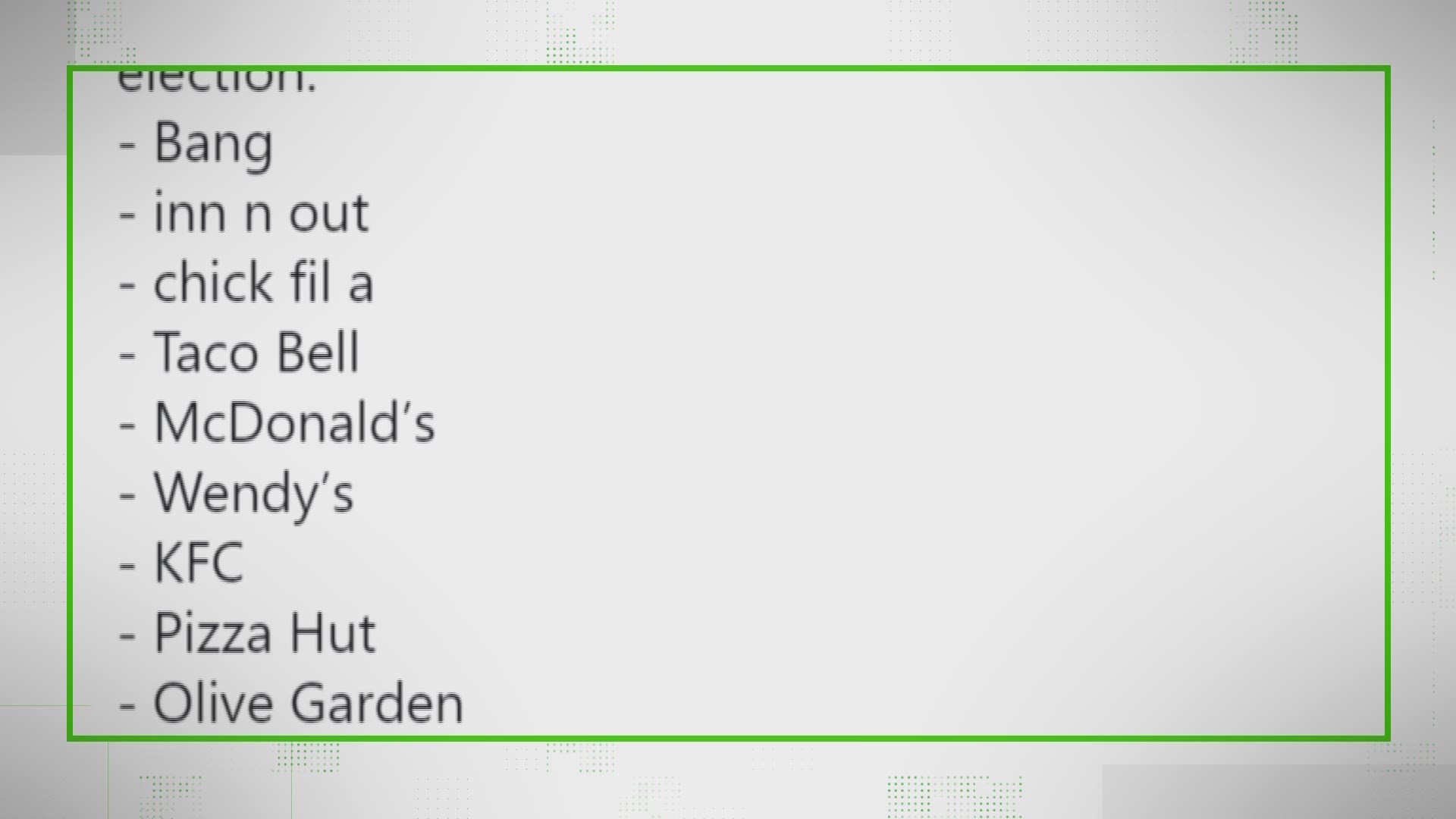 As the 2020 election approaches, many social media comments are turning their focus to supporting or opposing presidential candidates.

One viral claim has spread from Twitter to Instagram and Facebook, and has many people checking it before swinging into a restaurant or fast-food chain. That’s because it lists more than a dozen businesses that are “supporting Trump’s re-election.”

And the post led to some others on social media, including by Chrissy Teigen (which we should warn has possibly offensive language). She and other celebrities have helped it grow to nearly 250,000 retweets and a half-million likes.

The predominant response to these messages is that people will now avoid these businesses because they support President Donald Trump’s re-election.

But before you go analyzing whether this is a good political move or not, let’s analyze if the claim is even true.

Does this list accurately represent companies that have donated to the president’s 2020 re-election campaign?

No. The initial list was built off sources for the 2016 election that showed what amounts employees of businesses donated, not what the businesses themselves contributed.

Put simply, it was the employees of the companies, not the businesses, that donated to Trump’s campaign.

Give credit where credit is due. The first poster, who goes by the handle @BillyBobSanderz, did share sources for their claims.

But there are problems with the sources. The first link goes to Chick-Fil-A’s page on OpenSecrets.org, a database of political donations that the Center for Responsive Politics compiles based off public Federal Election Commission data.

On the Chick-Fil-A page, you will see that Trump is listed as having received $3,518. But there are two issues.

1.) The data sourced here is actually from the 2016 election, not for 2020 as the initial post claims.
2.) The dark green color for the “source of funds” indicates that the funding all came from “individuals,” not political action committees or the company itself.

Under Federal Election Commission rules, anyone who makes a political contribution greater than $200 must list their place of employment.

Go through the list of businesses on OpenSecrets and you’ll see, in almost every case, the money shown represents money donated by individuals, not the company. In some cases there are political action committees listed, but those are also separate from the companies themselves.

On the same pages that the initial poster listed, OpenSecrets explains, “The organizations themselves did not donate, rather the money came from the organizations’ PACs, their individual members or employees or owners, and those individuals’ immediate families.”

Some of the companies listed do show PAC contributions on their pages. Take Taco Bell for instance. The TACO PAC did donate $5,000 to Trump in 2016. But while the PAC is made up of franchise owners across the country, it’s not actually Taco Bell or their parent company Yum! that are donating.

We’re verifying this list is false. It uses data from 2016 to make claims about 2020 and it does so by blaming companies for the donations that their employees made.

So before you go boycotting these businesses, keep in mind that the list is wrong and these companies aren’t the ones donating the funds.