Paige Peterson posted two photos of her breast milk on Facebook. One showed her normal milk. The other showed her milk during the time her daughter had the flu. There is a significant physical difference. 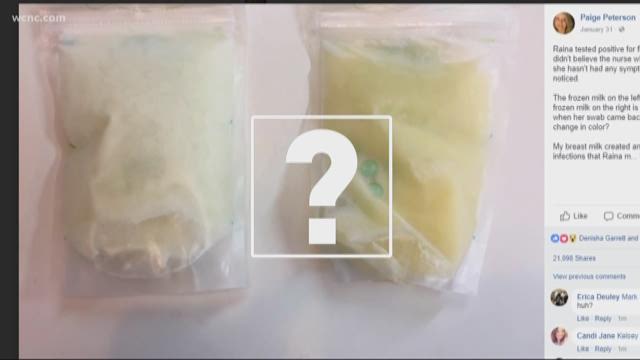 CHARLOTTE, N.C. -- A Facebook post is going viral from a mother who says her breast milk physically changed to treat her nursing baby who has the flu.

Paige Peterson posted two photos of her breast milk on Facebook. One showed her normal milk. The other showed her milk during the time her daughter had the flu. There is a significant physical difference.

“Raina tested positive for flu this past weekend,” Peterson wrote in her post. “I didn't believe the nurse when she told me because she hasn't had any symptoms of flu that I have noticed. The frozen milk on the left is from 2 weeks ago. The frozen milk on the right is from this past weekend when her swab came back positive. Notice the change in color? My breast milk created antibodies to fight off any infections that Raina may have had. I never gave her Tamiflu. THIS is why I breastfeed!”

Peterson told NBC Charlotte Friday, “I read your mammary glands can detect bacteria or illness in your baby when you breast-feed.”

So is it true? We picked up the phone and called international board certified lactation consultant Rachel Miller who works with Piedmont Medical Center in Rock Hill.

“Absolutely,” Miller said. “A baby, when they're nursing at the breast, their mouth and saliva exposes the breast itself to what baby has been exposed to.”

Even the darker color can be explained.

“Sometimes when we are sick our body is burning extra calories as we’re fighting off that illness, so it could very well increase the calories of mom's milk to make sure the baby has the energy to be doing the work of fighting off the virus,” Miller said. “That definitely would change the appearance of the milk in a way where it would look more yellow.”

Peterson said, as a new mom, she’s amazed that breast milk can change to accommodate what a baby needs.

“I would never tell a mom how to feed their child, ever,” she said. “But I'm glad I'm getting the word out about breast milk.”