Former NHL star Bryan Bickell is making a comeback with the Charlotte Checkers just months after being diagnosed with Multiple Sclerosis. 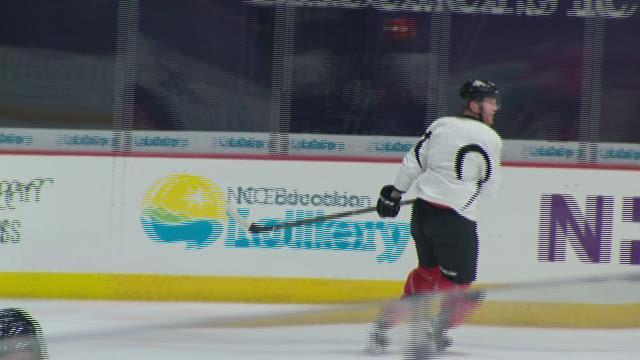 CHARLOTTE - Thirty-year-old Bryan Bickell built himself a nice life in the NHL.

He's even netted a historic Stanley Cup goal in 2013.

But after a while, the Chicago Blackhawks moved on from Bickell, trading him to Carolina.

Now he's with the Checkers in Charlotte trying to get back to the NHL.

"If felt good," Bickell said. "The first period was a little rusty."

On Saturday Bickell made his Checkers debut. But this isn't your ordinary NHL comeback story. The debut came four months after Bickell received a life-changing diagnosis.

"(The doctor) told me I had MS," Bickell said. "Obviously the next question is what is MS?"

Unbeknownst to Bickell, he'd been struggling with symptoms the last few seasons.

"A big thing with MS is balance," he said. "You think back a couple of years ago where my balance was off."

The diagnosis came in November just as his stint with the Hurricanes began. Getting back on the ice seemed like a distant dream.

"The symptom -- not sleeping, being dizzy a lot," said Bickell.

But perhaps the scariest part of MS is its unpredictability. Right now, Bickell is not one of the 10 percent of patients who suffer from the more severe, primary progressive form of the disease.

"Where people walk with canes," Bickell said, "there's people in wheel chairs. It's tough to see. We're relieved that it's not progressive."

Bickell gets treatment once a month.

"Takes a couple of hours, I sit in a chair, they pump me some good stuff to get me through the month," he said with a smile.

And Saturday Bickell took his first steps in returning to where he belongs.

"Right now we're doing this treatment so I can play hockey," he said, "and to do what I was born to do my whole life."