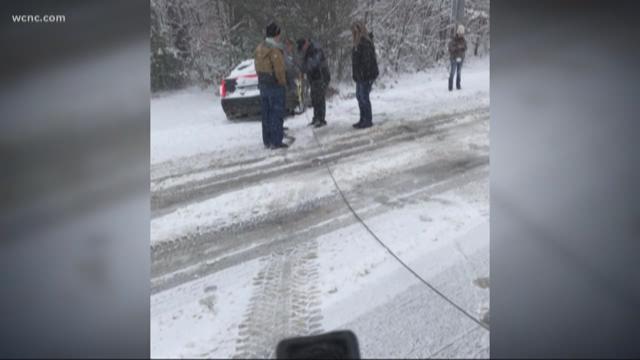 CHARLOTTE, N.C. -- For driver Jeremy Labretone to be involved in an auto accident Wednesday wasn't uncommon, considering the fact that winter weather battered the Carolinas all day.

Thousands of accidents were reported in North Carolina, mostly due to the ice and snow. The difference between Jeremy and everyone else, however, was the person who stopped to help him.

Labretone was driving his Cadillac CTS home from work when he lost control of his car, skidded into a ditch and hit a tree. His airbags didn't deploy and he was just fine but his car was not so fortunate.

"When you hit a pine tree, it's pretty solid. It ain't moving!"

Labretone called his buddy, who arrived in a truck and they waited for a tow truck until a good Samaritan stopped.

"I see this silver Jeep pull up," Labretone recalled to NBC Charlotte. "He rolled his window down and it was Dale [Earnhardt] Jr."

Labretone was shocked but it wasn't the first time he's met the man affectionately known as "Junior."

Earnhardt Jr. used his wench to help Labretone get his car out of the ditch and the day wore on with a story that people might not believe.

However, Dale Jr. tweeted a picture of the incident, giving Labretone some actual proof of his run-in with a racing legend.

NC stay off the roads today/tonight. 5 minutes after helping these folks I center punched a pine tree. All good. Probably just needs a new alignment. pic.twitter.com/OfA5Q28jew

No one suffered any injuries and Dale Jr. even offered up some free advice before he and Jeremy went their separate ways.

"He said, 'you might want to get some new tires for this thing,' and I said 'yeah, you're probably right.'"