After flight delayed, then canceled, passenger uses emergency exit of plane on tarmac at Charlotte airport

The flight from Charlotte to Baltimore had been delayed for two hours, then canceled. 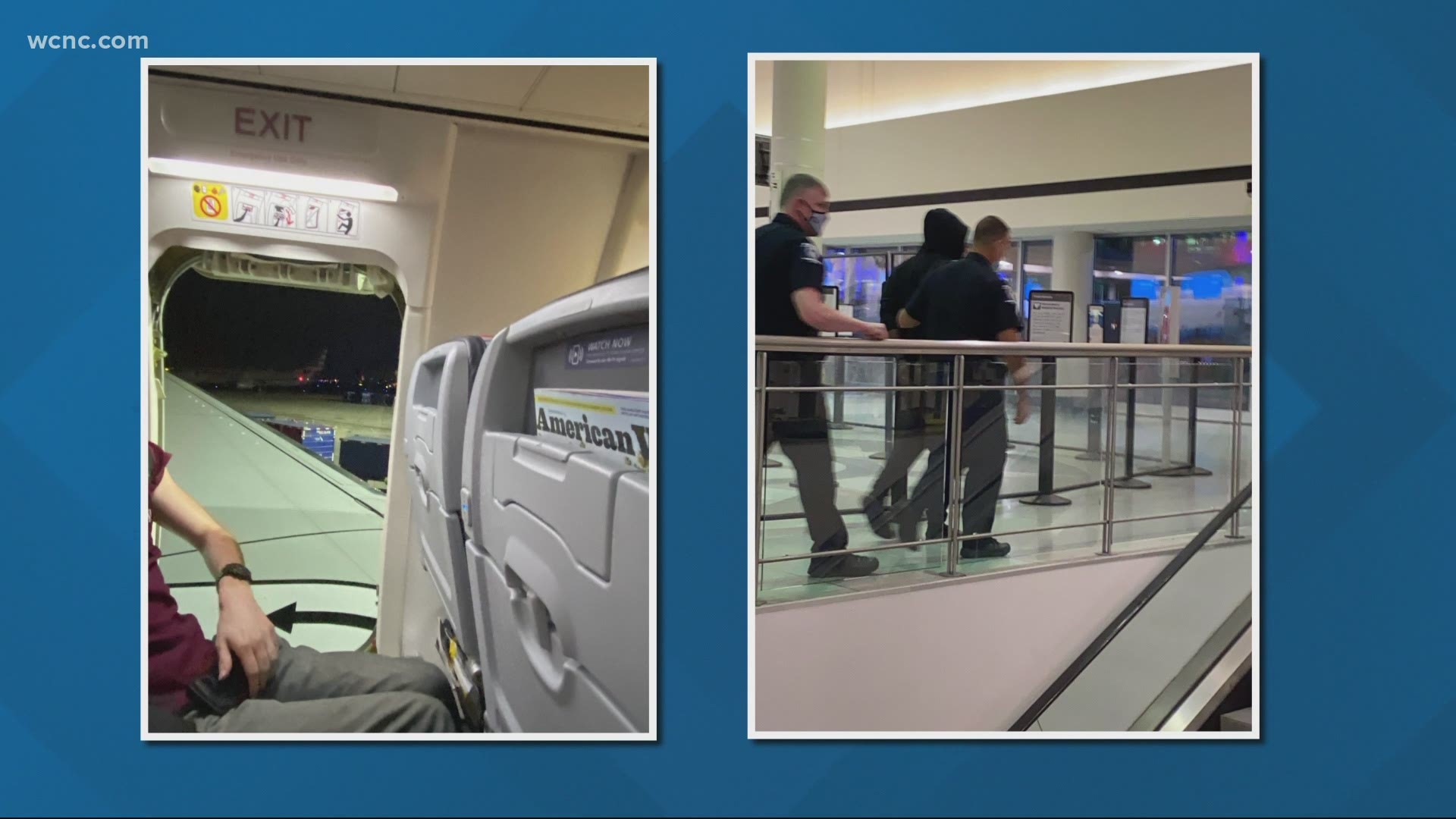 CHARLOTTE, N.C. — A passenger on a flight out of Charlotte Douglas International Airport was arrested after opening the exit door of a plane while it was on the tarmac, then climbing out of the plane.

WCNC Charlotte's Brandon Goldner was on that flight and captured images of the incident. The flight was heading from Charlotte to Baltimore, but had been delayed two hours, then eventually canceled. The plane then sat on the tarmac for another 45 minutes while waiting for a gate agent, according to Goldner.

The passenger seemed to be frustrated and tired of waiting, then climbed over other passengers to get to the emergency exit.

RELATED: CLT Happenings: Where to watch fireworks this Fourth of July in Charlotte

The flight had 172 customers and six crew members on board, according to American Airlines. The jet bridge was pulled from the aircraft at roughly 8:55 p.m., and passengers were able to exit the plane from the boarding door around 9:35 p.m.

Once off the flight, Goldner saw as the passenger was led out of the airport in handcuffs. The customer has also been placed on American Airlines’s internal refuse list pending further investigation.

American Airlines has provided the following statement to WCNC Charlotte:

"After boarding was complete, American Airlines flight 2396, with service from Charlotte Douglas International Airport (CLT) to Thurgood Marshall Baltimore-Washington International Airport (BWI), canceled due to severe weather restricting air traffic throughout the mid-Atlantic and Northeast. While waiting for the jet bridge to be repositioned, a passenger opened the over-wing emergency exit and jumped onto the ramp. The customer was immediately detained by American team members before being placed into custody by Charlotte Mecklenburg Police. All other customers deplaned normally via jet bridge once the forward boarding door was reopened. We thank our team members for their professionalism and apologize to our customers for the inconvenience."

As I’m rushing to grab a rental car, the passenger is bring led out of the airport in handcuffs. pic.twitter.com/YoKwEB9zXX

RELATED: Flying this holiday weekend? You'll want to get to Charlotte Douglas International Airport long before your flight