The towing company has since refunded all of the money, including $600 in credit card fees, following NBC Charlotte's questions. 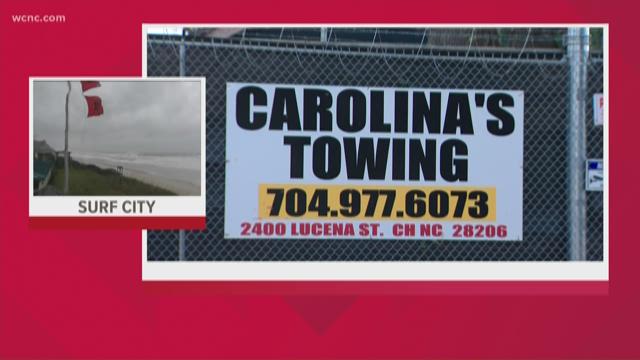 CHARLOTTE, N.C. — A tractor-trailer full of hurricane supplies, including medical items, batteries and flashlights, was held up Thursday morning on its way to an American Red Cross drop-off location in Charlotte.

A towing company stopped the driver, booted two of his tires and demanded $3,000. The towing company has since refunded all of the money, including $600 in credit card fees, following NBC Charlotte's questions.

"I've been driving for 17 years, but I've never seen anything like this," Hazim Dzananovic said Thursday afternoon. "I'm disappointed."

The trucker, on his way to Charlotte from an American Red Cross location in Missouri, filmed helplessly as Carolina's Towing demanded thousands of dollars to release two of his tires early Thursday morning. They were booted, he said, unknowingly, while he sat in his cab with 25,000 pounds of hurricane supplies in his trailer ready to be dropped off nearby.

"These guys, they locked my wheels," he said.

Carolina's Towing is contracted to keep people who aren't customers out of a shopping center at W. 24th and North Graham Street. Signs are clearly posted that say, "No Tractor-Trailer Parking Allowed At Any Time."

While the company said rules are rules, in addition to refunding the driver's money, Robinson said Carolina's Towing also plans on collecting and donating items for hurricane relief as an added gesture.

"We feel bad that we held up someone that was going out to help somebody," Robinson said. "We're going to help during this storm."

The company said management found out about the situation from NBC Charlotte.

"There were no markings on the truck to say what it was," Robinson said. "We are not trying to take advantage of anybody. It's just business. We didn't know who was in the truck, what was in the truck."

Dzananovic said the employee who booted his truck was aware of his situation.

"Did you tell them you had hurricane supplies in your truck?" we asked.

"Yes, I did. Immediately," he replied.

He even called in police to help with no luck.

"You told them you had hurricane supplies?" we asked.

Dzananovic's boss then reached out to us.

"The towing company told us about an hour-and-a-half ago, they're going to give you a refund," we told him Thursday afternoon.

At one time, there was a cap on the amount of money a towing company could charge for booting a vehicle, but that changed several years ago when the North Carolina Supreme Court overruled it, according to Charlotte-Mecklenburg Police Department's website.