Mom, infant in Wilmington were the first victims of Hurricane Florence

"Our hearts go out to the family of these victims. Two people in Wilmington were killed when a tree fell on their home," Gov. Cooper said. 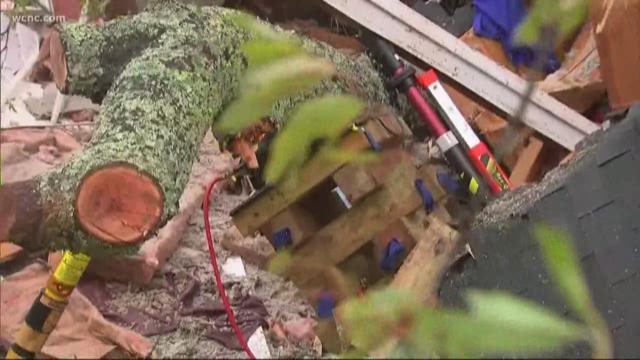 WILMINGTON, N.C. -- The Wilmington Police Department confirms Hurricane Florence has killed two after a tree falls on a mother and infant in Wilmington, NC.

The father was also home, and he was taken to the New Hanover Regional Medical Center for treatment. Officials did not know his condition as of 3:30 p.m. Friday.

The family was trapped for several hours as firefighters tried to rescue them. The large size of the tree made it difficult, Wilmington Fire Department Chief Jon Mason said during a Friday afternoon press conference. Firefighters used heavy lifting, air bags and saws in what was an emotional rescue.

There have been numerous calls for fallen trees, according to officials, however they are not aware of any others where people are trapped.

These are the first confirmed fatalities from the Category 1 hurricane, according to the Wilmington Police Department.

In an interview with North Carolina's Governor, Roy Cooper said [North Carolina] has had three deaths related to the storm.

"Our hearts go out to the family of these victims. Two people in Wilmington were killed when a tree fell on their home," Cooper said.

PHOTOS: Your pics as Hurricane Florence batters the Carolinas

1 / 82
The photo below shows firefighters praying at the scene.

Firefighters pray at an operation to remove a tree that fell on a house injuring resident during Hurricane Florence in Wilmington, North Carolina on September 14, 2018. (ANDREW CABALLERO-REYNOLDS/AFP/Getty Images)