One person has died, 26K customers without power, and countless numbers of trees snapped. The flood threat continues across the area. 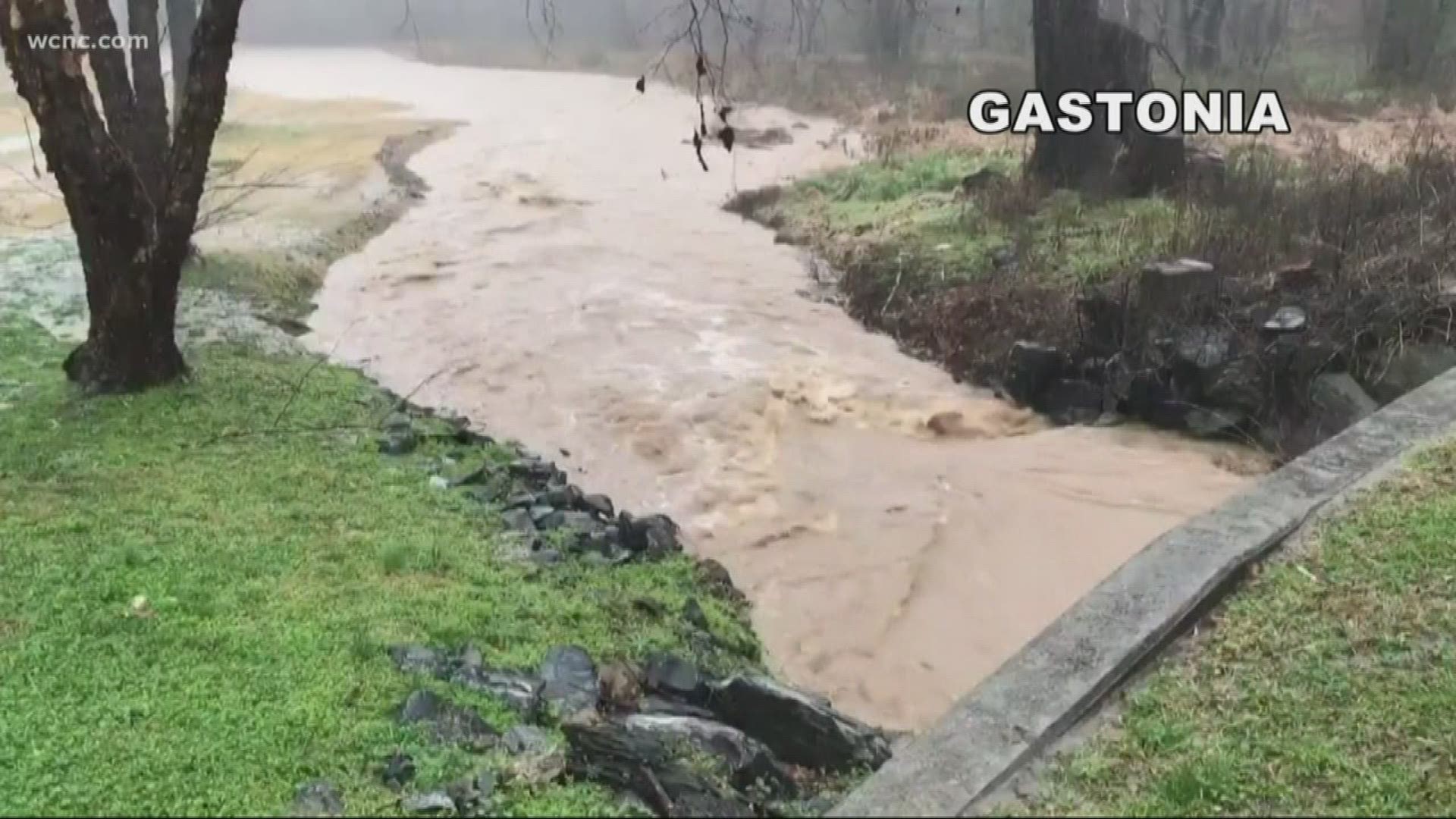 Below is a timeline of severe weather that rolled through Charlotte and the surrounding area Thursday.

5:37 p.m. - Union County Public Schools did not to run their buses to take students home from Porter Ridge Middle School due to severe weather.

5:16 p.m. - A second death due to severe weather has been confirmed by the North Carolina Highway Patrol.  Terry Roger Fisher from Cherryville died when his Ford Ranger hydroplaned on Doc Wehunt Road in Gaston County. The vehicle crashed down an embankment and landed upside down in a creek.

4:29 p.m. - Medic says they responded to 61 traffic accidents since midnight. That's about double the usual number of crashes for a Thursday.

4:01 p.m. - The tornado watches are expiring, but the problem is the flash flood threat continues.  Click here for watches and warnings

3:55 p.m.  -The National Weather Service will send storm survey crews to the area Friday to investigate storm damage to determine if damage was caused by tornadoes, straight line winds, or other forms of severe weather. They will visit Gaston, Lincoln, Cleveland, Mecklenburg and Cabarrus counties.

2:50 p.m. - First confirmed death reported as severe storms and tornadoes moved through the Carolinas.  A tree fell on a car as the driver was headed down Pleasant Road in York County.  The accident happened about three miles north of Fort Mill. The victim's name has not been released at this time.

2:42 p.m. - "We have so much rain sitting on top of us.  This is going to cause big-time flooding issues for the remainder of the evening," said Brad Panovich.

2:39 p.m. - Several reports of possible tornado damage in Gaston County, one in southern Mecklenburg County near Park Road and Highway 51 and three reports in the Concord and Kannapolis area.  "These won't be the only reports," Brad Panovich said.  "These are only preliminary."

1:35 p.m. - A confirmed tornado in Kannapolis caused damage to a home along Salisbury Concord Road

1:15 p.m. - All tornado warnings have expired, but Brad Panovich says flooding is still a threat

1:03 p.m. - There are several reports of trees down and damage in south Charlotte and Pineville

12:57 p.m. - The storms knocked a mail truck over in Gaston County. The driver has minor injuries

12:50 p.m. - Trees down along Park Road near Park Crossing Drive

12:01 p.m. - There is a temporary lull in storms in Charlotte, but Brad Panovich warns round two is coming

11:53 a.m. - Radar scan shows circulation is currently 12 miles southeast of Salisbury near Rockwell.  It is moving east at 50 mph.

11:44 a.m. - Kannapolis Emergency Management reports a tornado on the ground in Kannapolis

11:38 a.m. Possible tornado in Cabarrus County and the major concern is wind, especially near Old concord Road and I-85

11:34 a.m. - Let me read you this tornado warning from the National Weather Service because they're putting very strong wording in this.  "This Tornado Warning just issued for Charlotte does indicate there is a tornado on the ground seven miles east of Gastonia moving east at 45 mph."

11:21 a.m. - There is a report of an overturned tractor-trailer on Highway 321 in Gaston County.  That storm system just moved right across 321.  "The radar was telling us we were seeing debris and now we're getting ground truth of things being tossed or picked up," said Brad Panovich.

11:20 a.m. - "Tornado sirens only work when you're outside.  They're outdoor warning devices.  Please don't wait to hear them.  Seek shelter if you're under a tornado warning," said Brad Panovich.

11:16 a.m. - There is shelter in place away from windows at the Charlotte-Douglas International Airport.  The FAA evacuated the tower.

11:10 a.m. - "This is one of those situations in all the years that we've been doing this, we have never seen this multitude amount of tornado warnings at one time in such a populated area," said Larry Sprinkle.

10:50 a.m. Brad Panovich says a confirmed tornado on radar is on the ground in south of Kings Mountain.  If you live in the area take shelter now.  Get as many walls around you as you can.  "Those walls will block the debris," Panovich said.

School Districts announce early dismal for students and teachers as the threat for severe weather continues.

A Tornado Warning has been issued for Catawba and Lincoln Counties until 11:00 a.m.

A Tornado Watch has been issued for Charlotte, Piedmont, and Foothills.

A tornado warning has been issued for parts of Cleveland, Lincoln and Gaston Counties. Seek shelter immediately.

Medic has responded to 15 crashes on Thursday morning between 6 a.m. and 9 a.m.

Creek in Icard is exceeding its banks. Culverts are starting to look like rapids in some spots. WCNC Charlotte will monitor this area for potential flooding.

A section of US-70 in Icard near Maple Lane Lake is already underwater and more water continues to spill into the road. Locals say the last time this road flooded was back in June.

More than a thousand without power in northeast Charlotte. Duke Energy is sending a technician to restore power to these customers.