A Flash Flood Watch means there is the chance for rapid onset of flooding in the area. It's a dangerous situation and can affect areas that don't normally flood.

CHARLOTTE, N.C. — The remnants of Tropical Depression Sally are bringing heavy rains and a flooding through to the Carolinas on Thursday. We're monitoring real-time severe weather conditions, which include the potential for significant flash flooding and isolated tornadoes.

Below is non-stop coverage from WCNC Charlotte and the First Warn Storm Team. Tune-in to our continuous live stream, or scroll down to read our live blog with real-time storm reports and conditions.

5:00 p.m. - The rain will become more scattered and light as the evening goes on as the worst has shifted east of the area. Lingering showers, drizzle, and fog overnight with lows dropping into the 60s. 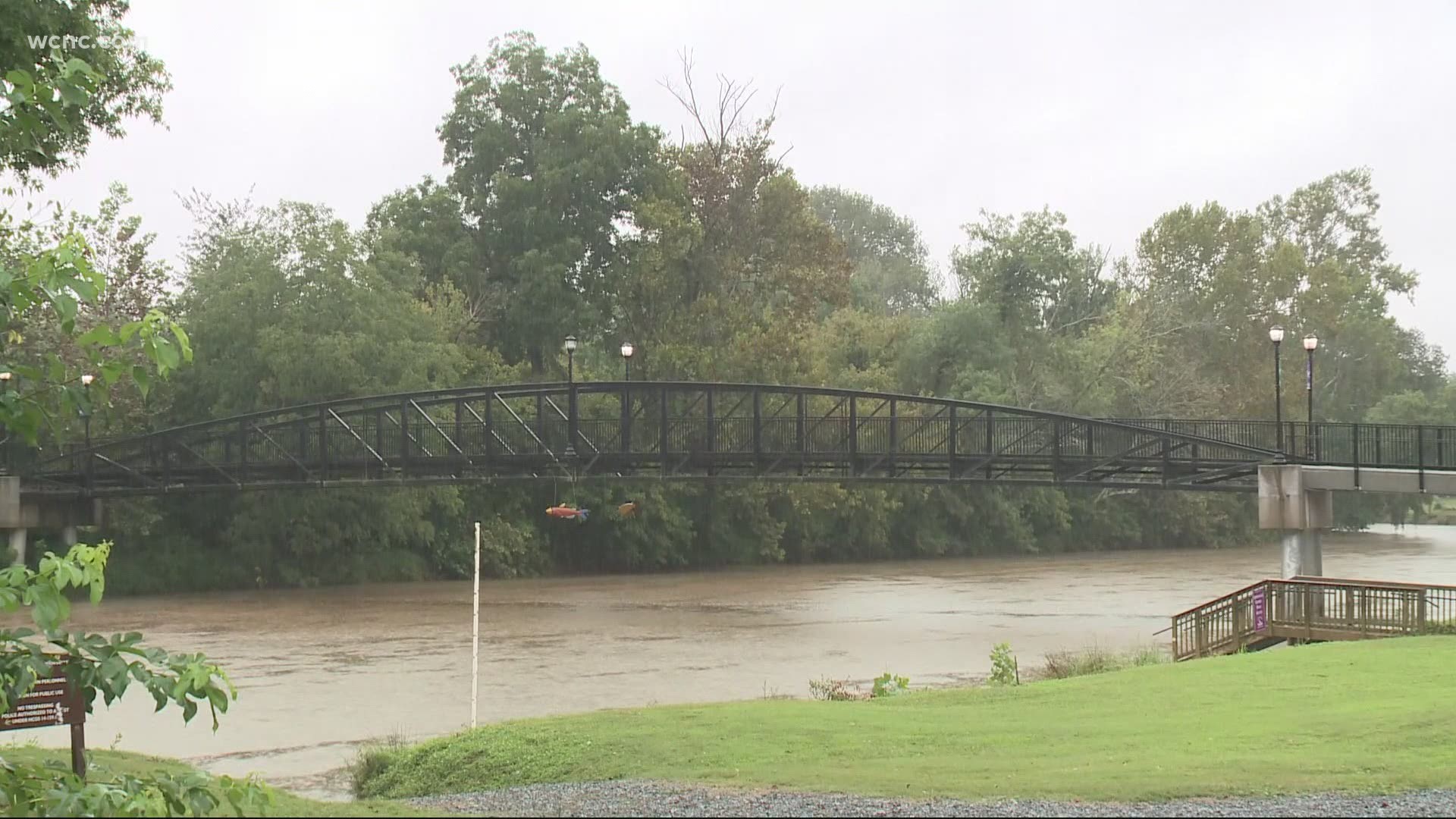 1:21 p.m. - A portion of the storm moving through South Carolina towards I-95 will likely continue to produce tornado warnings, according to Chief Meteorologist Brad Panovich.

1:02 p.m. - The storm is moving faster than expected through the area. Chief Meteorologist Brad Panovich said that will cut down on rain totals. The worst of the storm system should be out of the area by Thursday evening.

This thing is moving about 6 hrs faster than it looked yesterday, it will cut down on totals and should get the worst out of here by this evening. #cltwx #ncwx #scwx pic.twitter.com/OJevnTygzj

12:32 p.m. - The National Weather Service has issued a Flood Advisory for Mecklenburg County.

11:57 a.m. - The crew in WCNC Charlotte's Chevy Storm Tracker has been monitoring conditions on the roadways.  Heavy ponding and puddles are starting to form on roads in the Charlotte area.  Local officials urge drivers to slow down on wet roads.

10:54 a.m. - Matthews Police Department says Hwy. 51 at Courtney Ln. is back open. The tree that was blocking the roadway has been cleared.

Chief Meteorologist Brad Panovich has been tracking the system and said there is some good news and bad news for the area.

"The good news is rainfall totals are lower and the severe weather threat is going down. The bad news is it's still going to rain and we're still likely going to see some isolated flooding," he said in a live vlog on Facebook Thursday morning.

The First Warn Storm Team is expecting two to four inches of rain in the area throughout the day Thursday as the remnants of Tropical Storm Sally moves through.

"I don't want to discount the rainfall. It's just lower than the crazy amounts we saw yesterday," warns Panovich.

The thing to watch in the next several hours is a heavy rain band that will pass over the area around lunch time. With the rain will come Flash Flood Warnings.

A Flash Flood Warning means there is the chance for rapid onset of flooding in the area. It's a dangerous situation and can even affect areas that don't normally flood.

Though not likely, a tornado is possible south of the Charlotte area.

"We certainly have to watch the potential out toward Richmond County, out toward Anson County. Those are the areas in particular we're probably going to have to watch very carefully," said Panovich.

The area is under a Flood Watch until 8 a.m. Friday.

The First Warn Storm Team's Larry Sprinkle said all residents should stay weather aware as the heavy rain can produce areas of flash flooding along small streams, creeks, and all flood-prone areas.

RELATED: It's been 15 years since the Greek alphabet was used in a tropical storm name; it could happen again by next week

Sprinkle also said some minor river flooding is possible, which could include the South Fork of the Catawba River. Flooding of parks, greenways, farmland, and secondary roads are also possible.

8:39 a.m. - Matthews Police Department is asking residents to avoid the area of Hwy. 51 at Courtney Ln. due to a downed tree that is blocking the north and southbound travel lanes. Alternate routes are I-485 or Trade St.