'This is just the beginning,' Panovich says as snow envelops Charlotte

An onslaught of snow transformed Charlotte and surrounding areas into a winter wonderland Wednesday morning. 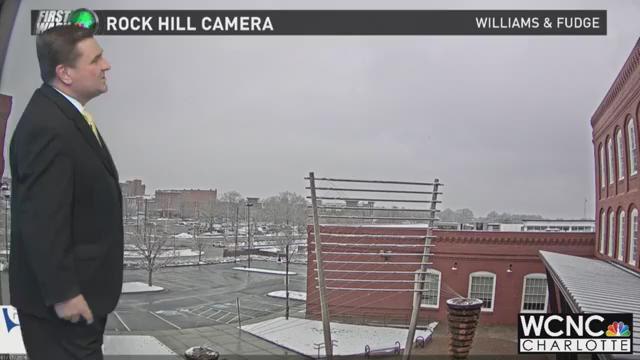 The arctic storm started out as rainfall which quickly changed into snowfall around between 6 to 8 a.m. Wednesday for most of the NBC Charlotte viewing area.

"When it changes to snow, it goes in a hurry," First Warn Storm Team Chief Meteorologist Brad Panovich said.

The storm's track continued to push to the east steadily but Panovich warns viewers that conditions will continue to worsen throughout the afternoon as temperatures drop.

"We could see snow lasting to mid afternoon at this rate," Panovich said. "I still expect the heaviest snow to be just to our east."

Panovich boxed out the area he expected the heaviest snow to be which included Greensboro, part of Raleigh and the Charlotte area.

"I think it's going to get heavy even in areas it's raining right now (at 11 a.m.)," Panovich said. "So even if it's raining where you were this morning, it's still coming - this wasn't an overnight storm this is a Wednesday storm."

Panovich said the heaviest snow is expected from mid morning till early afternoon with it tapering off by Wednesday evening.