After graduating from UNC Charlotte, this 23-year-old decided to bike across the country

Prior to the trip, he had only ever at most done a 50-mile trip. On this trip, he averaged about 70 miles a day. 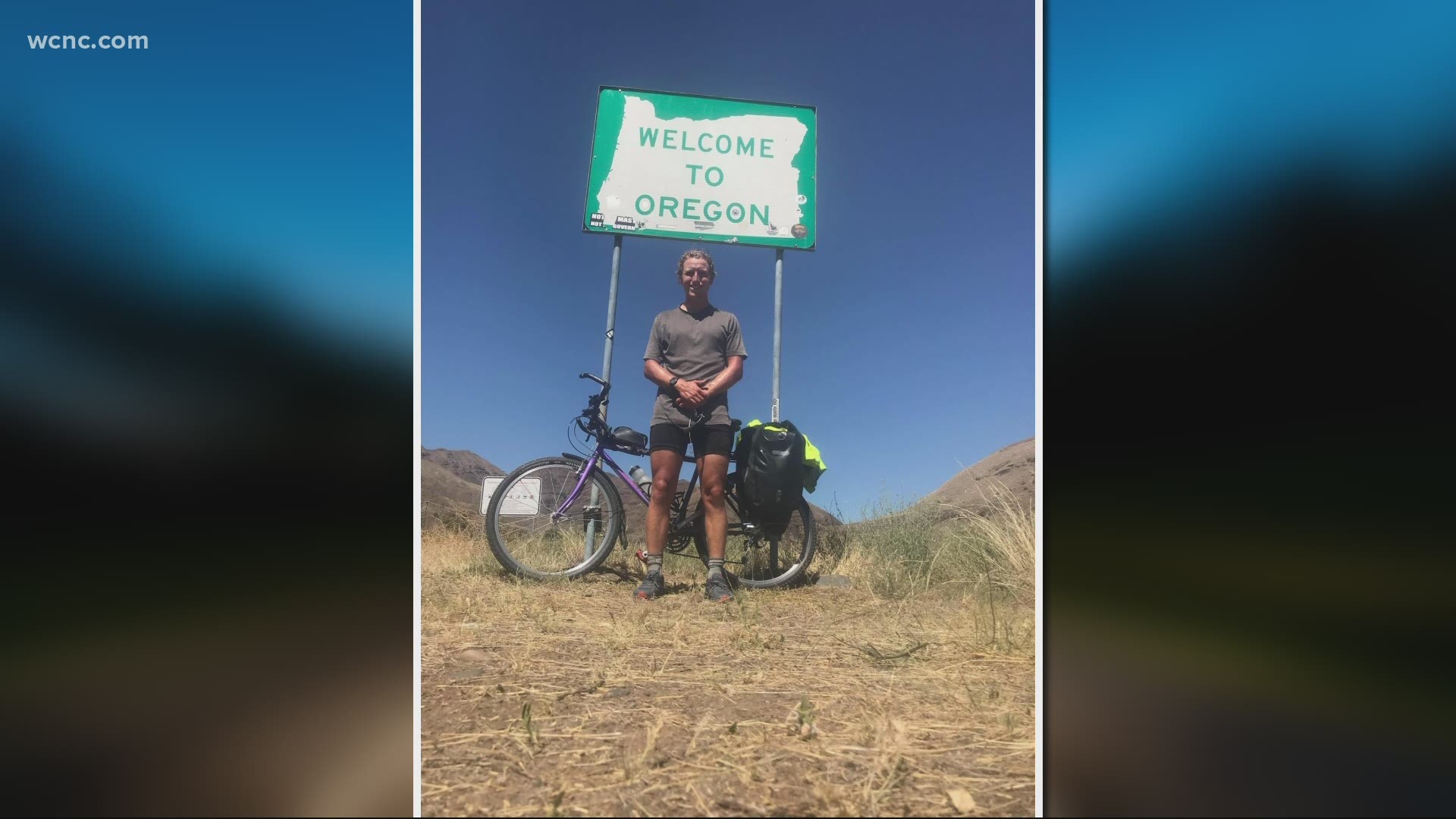 CHARLOTTE, N.C. — A UNC Charlotte grad has returned home after spending the summer riding his bike thousands of miles across the United States from North Carolina to Oregon.

Without a doubt, the coronavirus has upended plans for people across the country. For 23-year-old Jesse Greenlee, he decided to treat his canceled plans as an opportunity.

Greenlee graduated from the University of North Carolina at Charlotte in May and originally planned to work as a raft guide for the summer in Maine before proceeding with the post-grad job hunt.

When those plans fell through, he wasn't quite sure what to do with his time.

Then around his birthday in late May, he started plotting a cycling trip across the country. In less than two weeks, he hit the road.

Greenlee based his route on the Trans-American Bike Trail by the Adventure Cycling Association, altering it a bit by starting in Charlotte and heading straight to Missouri. The route finished in Astoria, Oregon — about 150 miles from his sister's Portland home.

He would start each day around 7 a.m., pack up his campsite and hit the road. He always had an end-goal for each day, and he aimed to make it there by around 3 p.m. At that point, he would take in the sights of the town before setting up camp for the night.

Prior to the trip, he had only ever at most done a 50-mile trip. On this trip, he averaged about 70 miles a day.

For a while, he wanted to see what his limits were — at one point pushing himself to go as far as 120 miles in one day.

But that burnt him out quickly.

"I kind of got in the mindset of like, why am I rushing to get this done?" Greenlee said. He decided to pace himself after that. "Just enjoy it a little bit more, slow down."

Greenlee said one of the highlights of the trip was all of the new people he met along the way.

Strangers that saw him on the side of the road would offer water or Gatorade, get to talking, then let him camp in their yards. Sometimes they would make him dinner, let him use their shower, or do laundry. Some of the strangers that took him in now feel like family, he said.

Greenlee started out the trip solo, but that changed when he stopped in Dubois, Wyoming.

As he was heading down Main Street, he noticed three loaded bikes that looked like his and three people that looked around his age: Kenneth, Athena and Alli. He found out they were all heading about the same way, so they decided to go together for the last third of the way.

Greenlee said he became fast friends with the group and found himself not wanting the adventure to end. Over the course of the trip, he was able to make a stop to see his girlfriend in Missouri, a friend in St. Louis, and a slight detour through Teton National Park.

He even took a picture of his bike in front of each state line they crossed. His favorite was Colorado — he said making it there made the whole journey feel real to him.

In total, he went through 11 states on the route. However, once he got to Portland, he biked a little bit longer to Vancouver, Washington to add a 12th state to his list.

“I think my biggest takeaway was just to enjoy what you’re doing and not look forward to the end so much that you kind of rush through," Greenlee said. "Not looking at the end goal necessarily but just enjoying the journey and doing what you’re doing."

When he arrived at his sister's home in Portland, Oregon, he said it really felt like he finished his journey. She even had decorated for his arrival — putting our purple balloons to match his purple bike.

"It was great, I reached the Pacific Coast but I still didn’t feel done with the trip so making it to my sister’s house felt like, ‘OK, I’m really done with the bicycle portion of this trip, I really made it,'" he said.

If others are thinking of carving out time for a similar adventure, Greenlee wants people to know they shouldn't let the uncertainty get in their way.

You don't need a suite of fancy equipment, he said. He had two saddlebags and a day bag with him on his "older-than-me mountain bike." The rest was up to him and the route.

"Plan enough to where you’re safe but you don’t have to plan like every single aspect of everything," he said. "Most things will work out if you approach it with a positive mindset and an open mindset.”