Art in the Queen City: A guide to street art in some of Charlotte’s popular neighborhoods 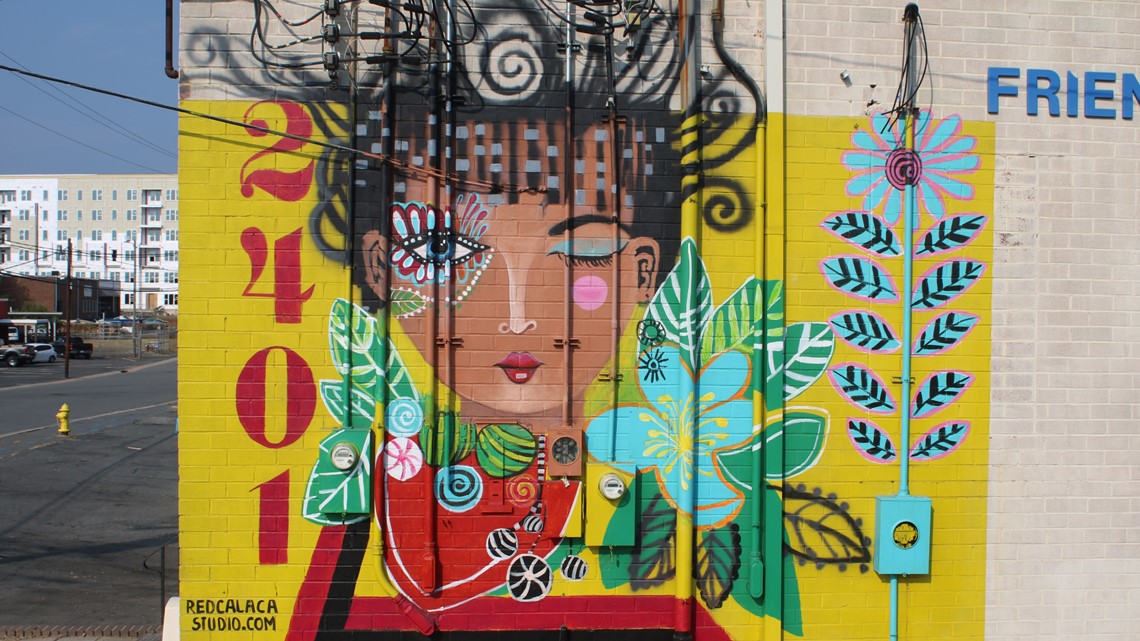 First up, Charlotte’s South End neighborhood. One of the most popular murals in Charlotte lives in South End, the Confetti Hearts Wall by Evelyn Henson. Located on a giant wall just past Hawkers Asian Street Fare and Jeni's Splendid Ice Creams, this mural has made a splash in the Queen City since it first went up in December of last year.

Henson said this was her first outdoor mural. She came from a background of stationary and mugs, but when she was brought a mural opportunity she made a list of what she needed to learn and got to work.

The heart wall took Henson about a week to complete. She said she had no idea if people would stop and look at it, let alone take pictures with it. Regardless, she hoped it would bring joy.

“One thing that inspires me in life and with art, and something I always try to communicate, is that the small things we do in our everyday life add up into something really big and bright and beautiful,” Henson said.

She points out how the confetti hearts seem small on their own, but they come together to form “something great.”  Henson also has a piece in the NoDa area, also near a Jeni's Splendid Ice Creams location, called the Confetti Stripes Wall. In future pieces, she hopes to continue the theme of confetti and the idea of “adding more love to your every day.”

“As both a person and an artist, my favorite thing is to bring sunshine into someone’s world,” Henson said. “Literally nothing makes me happier than when someone tells me that I brighten their day.”

South End is also home to several other pieces of public art from countless artists -- ranging from sculptures on the rail trail to murals on the sides of businesses and parking decks. Henson hopes her murals prompt an interest in some of the area's other public art.

“I hope that when people walk by the Confetti Hearts wall or the Confetti Stripes wall or any art in Charlotte, that they slow down and appreciate it and are inspired to go see more of the wonderful art that’s in Charlotte,” Henson said. “I hope that this mural is something that prompts people to go into a museum or go explore other murals in charlotte that they maybe haven’t noticed before.” 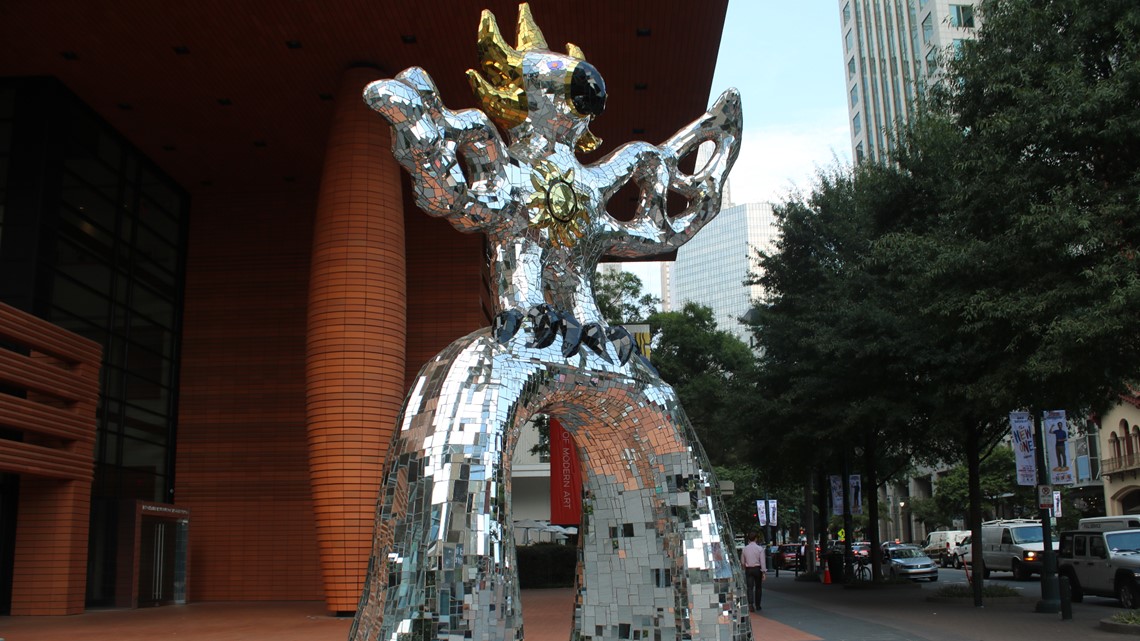 Uptown Charlotte's public art ranges from historical pieces that have been in the city for years to newer murals found on the sides of businesses or parking decks.

Sally Rogers, a sculptor living in Spruce Pine, created one of Charlotte’s fixture sculptures years ago -- Zygos. The sculpture has been located at the Corner of Trade and Poplar Streets since she first made it in 2007.

Zygos can be found at 333 West Trade Street in uptown Charlotte.
Sally Rogers

The sculpture is composed of multiple “C” shapes hooking into each other, and represents how a city or community can grow and develop through interconnectedness.

“Symbolically, that piece literally refers to the growth and development of Charlotte through cooperative efforts of various groups,” Rogers said. “I think that’s one of the reasons Charlotte has been so successful -- is it has a lot of really engaged groups of citizenry that are very eager to make their city better and promote their city. Zygos, the word, the interconnectedness refers to that.”

Rogers said public art is a partnership between artists and business owners as well as the communities they serve, saying art combines the concepts, skills, interests, and styles of the artists with the interests and needs of the site.

Uptown Charlotte can serve as a reminder of the different functions of public art, as the styles include everything from bright and colorful portraits to serious political commentary or polished and professional sculptures.

Rogers said earlier this summer she got an email from a child who was impacted by another piece of hers, and it reminded her of one perk of sharing her art with others.

“Those are just little gifts that come from the universe and make you feel like the work is worth something to somebody,” Rogers said. 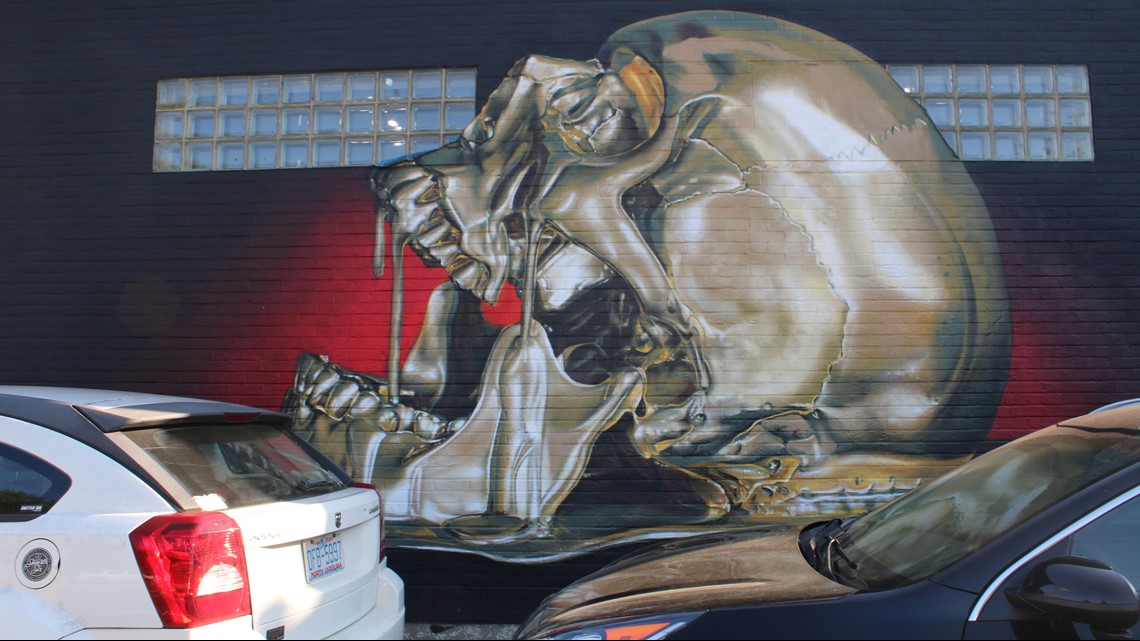 Plaza Midwood is no stranger to street art. Park in a public lot and walk down the street and you won’t get very far without seeing a mural on the side of a wall or an apartment complex.

A local artist known as "Cheeks" is a shop manager and self-described “jack of all trades” with the Southern Tiger Collective, a group of artists based out of NoDa that has art spanning across Charlotte and beyond.

Members of Southern Tiger Collective are behind one Plaza Midwood’s recognizable pieces of street art -- the Thanos mural at Seventh Sin Tattoo Company.

This mural can be found at Seventh Sin Tattoo Company, located at 927 Central Ave in the Plaza Midwood neighborhood of Charlotte.
WCNC

One of the things Cheeks said he loves about Southern Tiger Collective and the art scene in Charlotte is the ability to bring ideas to life in a public setting.

“A lot of people have a creative thought but they might not have the creative talents, so being able to translate that idea into a realization where people can experience it and have that interaction, I think that’s one of the more fulfilling things about art to me,” he told NBC Charlotte.

Cheeks thinks public art in Charlotte is going to keep growing, saying the city is becoming a great place for artists to work and express themselves.

“A lot more people have access to this, so a lot of people who are creatives can produce and have an audience,” Cheeks said. “I feel like that’s awesome that Charlotte is putting on for its locals, putting on for its creatives, and instilling people to continue to produce.” 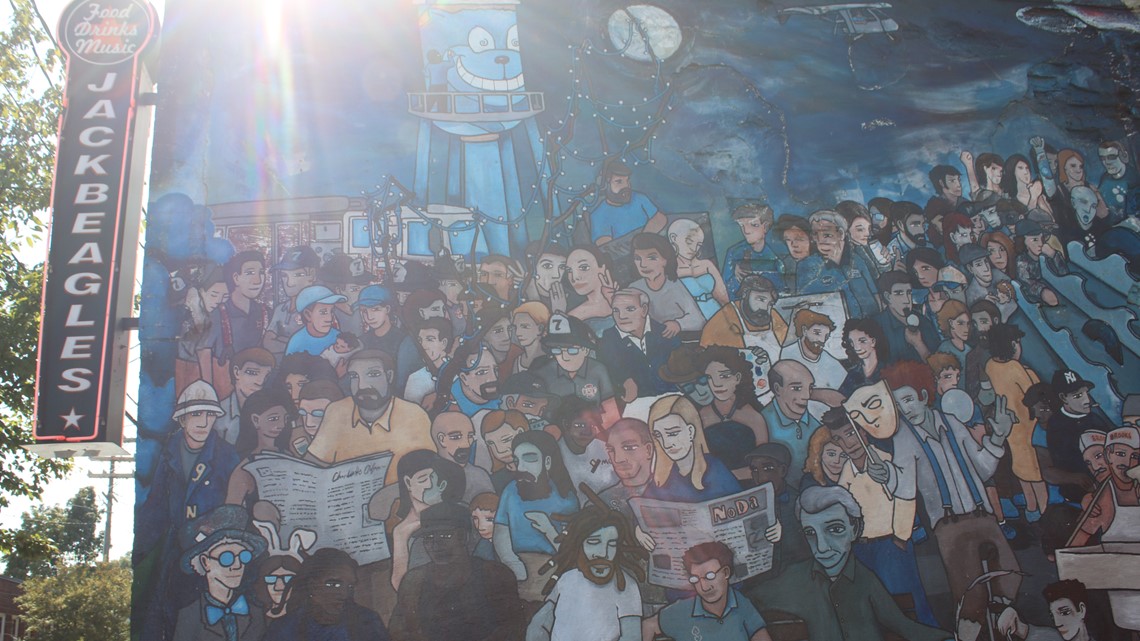 NoDa is commonly known as the arts district of Charlotte. With that in mind, it should come as no surprise that the small neighborhood not far from Uptown is overflowing with murals. There’s art just about everywhere you can imagine -- on walls, on the street, even on a dumpster.

Osiris Rain is a muralist who’s lived in Charlotte since he was a teenager, and first started painting around four years ago. He’s based in Charlotte, but has work all over the United States. His largest piece in NoDa was originally the site of an ad for the beer, Stella Artois.

What’s now known as “Bloom” was initially commissioned as a Stella Artois mural, leased for about six months. Once the lease ran out, Rain said he didn’t want the company to get free advertising -- so he repainted it on his own dime to fit the NoDa neighborhood more.

Bloom can be found on the corner of East 35th Street and North Davidson Street in NoDa, Charlotte.
Osiris Rain

What was once two chalices of Stella Artois is now a lotus, which Rain says represents rebirth and renewal. In the background, you can see letters spelling out “Charlotte,” and a Queen City crown made up of the city skyline sits on each person’s head. The dogwood blossoms in the background twist to make a DNA strand, because Rain says being a North Carolinian is a part of our DNA.

“Public art is so important because it bridges racial divides, class divides, any sort of isolation that we can put ourselves into in an urban environment, art can bridge that gap whether intentionally or unintentionally,” Rain said.

He hopes that his work can give anyone distracted by or stressed from a busy life in the city a chance to breathe and be still.

“If it makes you happy, it makes me happy, that’s the whole point,” Rain said.

Rain said Charlotte is experiencing a boom of public art which is “spreading like wildfire” and it’s in part thanks to how many artists are making it happen. He encourages people to go out and enjoy public art, and to be thankful that there are artists out there who want to bring art to the people.

“You don’t have to feel overwhelmed by entering into a gallery where pretension tends to reign heavy,” Rain said. “You don’t need anything special other than to walk down the street and be a part of it.”

Did we miss public art that you love in Charlotte? Do you think we should cover your Charlotte neighborhood? Reach out to us and let us know.