Little Asher even makes some deliveries of his own. He proudly wears a UPS uniform and thanks to Dad, he has his own battery-powered delivery truck. 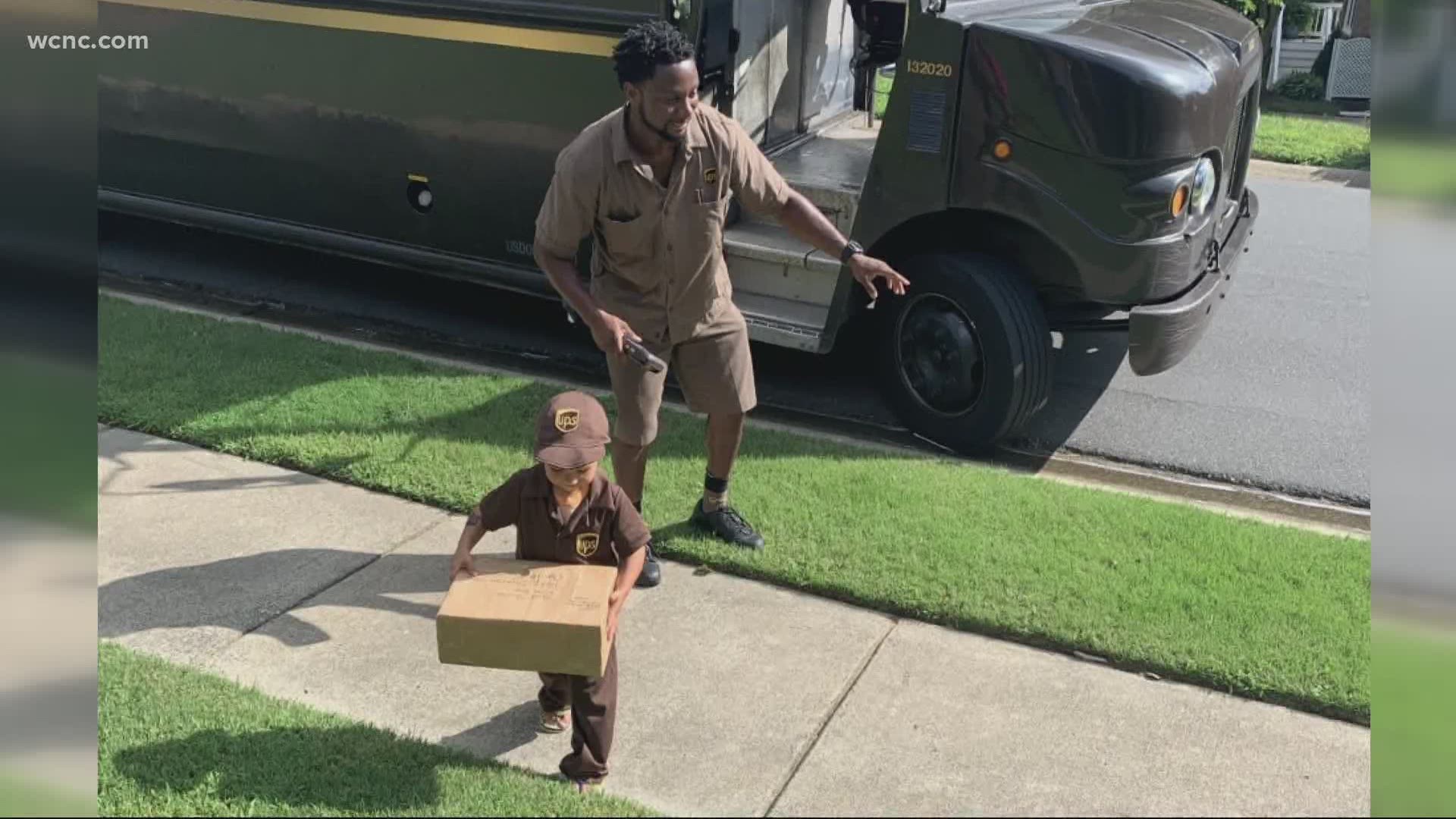 CHARLOTTE, N.C. — Like many families, the Masons of south Charlotte say they’ve been adapting to life during a pandemic.

“You know, 3-year-olds like routine and we were in March going to school every day and then he’d come home from school and then big brother would get off the school bus, and then a couple hours later mom would get home from work and then I think that’s sort of how we knew the day was done, and then suddenly we’re all just home, together, all the time,” Sarah Mason said.

Mason and her husband have two young sons, including 3-year-old Asher.

“I think he’s kind of found new ways to fall into a different type of routine and, funny enough, the delivery trucks have been a part of that,” Mason said. “The FedEx truck comes first and the Prime trucks come throughout the day, the mailman comes in the middle and then the UPS man comes at the end.”

And with the Masons spending a lot of time outside, they say the trucks sparked a new unexpected connection with Asher.

“He always waves to the trucks and over time he’s learned all of the driver’s names and determined he wants to be a delivery driver when he grows up,” says Mason, adding he even has UPS pajamas.

But Mason says one driver, in particular, began taking notice of Asher and his enthusiasm.

“He just took a special liking to Darryl, because Darryl has always gone out of his way to say hello, to learn his name," Mason said. "So even if we don’t have a package coming that day, if Darryl is driving by and Asher is playing, he’ll slow down and say, ‘Hi Asher’ and that just makes Asher’s night."

In between visits from Darryl, who drives for UPS, little Asher is busy making deliveries of his own. He proudly wears a UPS uniform and thanks to Dad, he even has his own battery-powered delivery truck.

“They’re adult socks so it takes some folding over on his little legs, but he’s very proud of them,” says Mason.

The Masons say they are beyond grateful to the kindness Darryl has shown their son, saying he has gone over and beyond, delivering more than just packages.

“I mean it’s hot, it’s 100 degrees, you know they have to be dying hot jumping in and out of the truck all day and I notice that every day he comes later and later which means he’s probably got a phenomenal amount of deliveries to make,” Mason said.“They’re exposed to a lot and they’re taking a lot of risks going to work every day to make life easier for the rest of us, so the fact that he takes the time out to get Asher a pair of socks or say hello and just make that human connection just means the world to us.”

Credit: Mason family
Editor's Note: The family confirms the photos of Asher and Darryl were taken before Mecklenburg County and North Carolina were under a mask mandate.

Mason says watching Asher and Darryl’s friendship blossom has been the silver lining to a very challenging year.

“Just the little things that you can do really mean a lot to people right now,” she said. “So just going out of your way to show some kindness and make a connection, it’s something we can all do, it doesn’t cost us anything.”

The Masons say the photos of Asher and Daryl were taken before the mask mandate was implemented in Charlotte.