They would not give up on Delilah. They just refused. 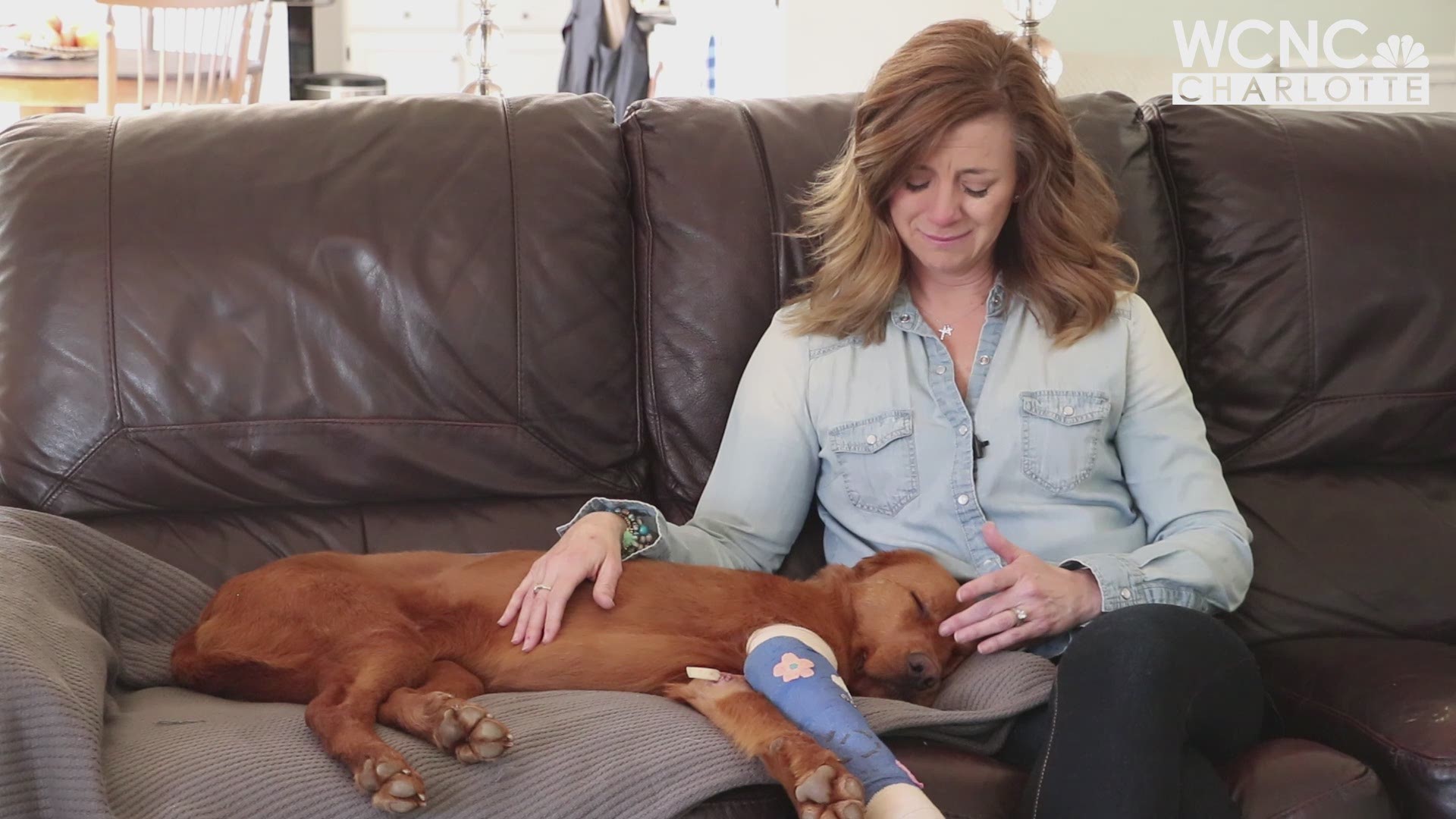 CHARLOTTE, N.C. — It was a week before the new year and Paige Twer wanted to spend 2019 with her family up in the mountains in Boone.

"I thought I had planned a really fun, let's kick off 2019 in the mountains with the family," Twer remembered.

The Twer family had already spent a couple of days exploring a few hiking trails in the area and were just about to head home when they decided to make one final stop.

"We already had the cars packed up, we were ready to come back to Charlotte and we were stopping to do one last hike in Moses Cone Memorial Park," Twer said.

The Twers decided to take one final family photo before they began hiking up the mountain.

"We had gotten out of the car, it was beautiful," Twer said.

Little did the family know, that photo would be the last time anyone saw their golden retriever mix, Delilah, for more than two months.

"Something just spooked her," Twer said. "She pulled from the leash and took off and she ran faster than we knew she could ever run yet."

Within a matter of minutes, Delilah was gone. Twer said at first she wasn't too worried. There were so many people up on the trail that day that she figured someone would just grab her.

"So that instantaneous panic didn't happen because there were people up there," Twer recalled.

The family quickly ran after their 1-year-old puppy and started asking people 'where did she go?' Delilah had run off so quickly, no one could tell them where she went.

"They couldn't tell us if she went right if she went left if she went straight ahead, and it's just a very rural area right there off of the Blue Ridge Parkway," Twer said.

That's when the family realized Delilah was just gone.

The four began calling for Delilah, walking up and down several trails and pathways hoping to catch a glimpse of their rescue puppy.

Soon, others on the trail were also joining in on the search. Twer said many people even asked her to send them a photo of Delilah so they could have them on their phones.

"Everyone was just so willing to stop what they were doing and help us," Twer said." There were people who were getting in their cars and would decide to stay and help us look for her."

This search lasted for hours, but it quickly got dark.

"Finally once it got too dark... it was just this sense of helplessness," Twer said. "And I think that realization that first night, that we have to go home."

It was one of the toughest decisions the Twers had to make as a family, leave the mountain and Delilah behind.

Though the Twers had planned to head back to Charlotte that day, they decided to stay in Boone a few more nights so they could go back and search for Delilah.

Paige and her husband woke up early the next morning and headed back out to the trail.

Along the way, they met a woman, Jessica, who stopped them to ask if they had seen a lost golden retriever mix puppy. She had been looking for Delilah.

So on day 2, the search began.

"We stopped every car that went by," Twer said. "We had the great fortune of so many people trying to help us make flyers because we were just in the mountains with cell phones."

By the end of that second day, hundreds of flyers had been printed out and passed around. It seemed like everyone was searching for Delilah.

But again, it was night time.

"So we realized the second day that we weren't going to come home with her," Twer said. So the first week was pretty much that... a lot of that."

The whole family was supposed to be back in Charlotte by that time, but Paige stayed up in Boone for the most part.

"There was a night that I came home because I hadn't seen my own girls," Twer said. "So I came home that night, just enough to tuck them into bed give them kisses goodnight and then got up and headed back to the Blowing Rock area."

During the first week of Delilah's disappearance, Paige kept thinking, today has to be the day.

But one week turned into two and the Twers weren't sure if they would ever see Delilah again.

Back in Boone, there was a group of three women who just would not stop searching for Delilah. Twer calls them her angels.

Jessica, Nancy and Virginia and started a GoFundMe account for Delilah as well as a 'Find Delilah' Facebook page. Once they realized they couldn't do this alone, they called in a professional dog tracker and trapper, Michelle from EPIC Animal Recovery

They would not give up on Delilah. They just refused.

Twer said there was a day when she called one of the women and told them it's ok, you don't have to keep searching.

The volunteer told Twer, 'we know this is not an expectation put forth on you. We can not rest.'

After several sightings of Delilah, the three volunteers noticed a pattern in Delilah's daily routine. She was taking up residence on a property that had three abandoned houses.

The three women would get up super early to cook steaks, and bacon and set out dog food for Delilah hoping to trap her in one of the houses.

Delilah was so scared and skittish that Twer said she wouldn't fall for the conventional traps they had set up for her.

The volunteers then began placing surveillance cameras around the property so they could track her every move.

Michelle and her EPIC dogs were called back to Boone and that's when the volunteers had noticed Delilah had a pretty severe injury to one of her legs.

Twer said a large coyote was also spotted in the property with the abandoned homes so they knew they had to work fast.

Michelle created a special dog trap just for Delilah and with an insane amount of patience, was able to eventually trap Delilah into a little room in one of the houses.

On Sunday night, two months after she ran away, Delilah's ordeal was finally over. That same night, Twer said her family had turned off their cellphones so they could get a full night of sleep.

"By the time I had gotten up Monday morning, I couldn't tell you how many texts and calls and messages we had. Everyone was trying to get in touch with us," Twer said.

At first, Twer couldn't even fully process the news she was receiving.

"They were like, 'they got Delilah', and it took me a minute when I first got up and I was like who are they talking about?"

Twer and her youngest daughter, J.J. threw on some clothes and jumped into their car and drove straight to Boone.

Panic sunk in for Twer as she was driving to pick up Delilah.

Twer and her daughter pulled into the vet's office where Delilah was being held and was immediately greeted by staff.

"Immediately three people jumped up and they were like, 'they're here, they're here,'" Twer said.

Twer and her daughter walked to the back of the vet's office.

"They said she's back there and let us walk back there and Nancy was back there with Delilah and Delilah was asleep on her lap," Twer said. "When we came around the corner, even though she was asleep and injured, she saw us and heard us and just jumped up and threw herself onto me and JJ."

Delilah has been back home for about three days now and the Twer family said it's like nothing has changed. Delilah sleeps on the couch a lot and Twer said she has to be next to Delilah at all times.

"I can't even leave the room without her barking, or whining, or crying," Twer said.

As for the three women who spent two months out of their lives to search for Delilah, Twer said there are no words to describe her gratitude.

Delilah experienced so much during her more than 60-day disappearance. At the time, Grandfather mountain was breaking record low temperatures and clocking wind gusts of more than 100 mph.