A simple front porch haircut quickly turned into much more than that when 1,600 people watching live donated more than $33,000 for charity. 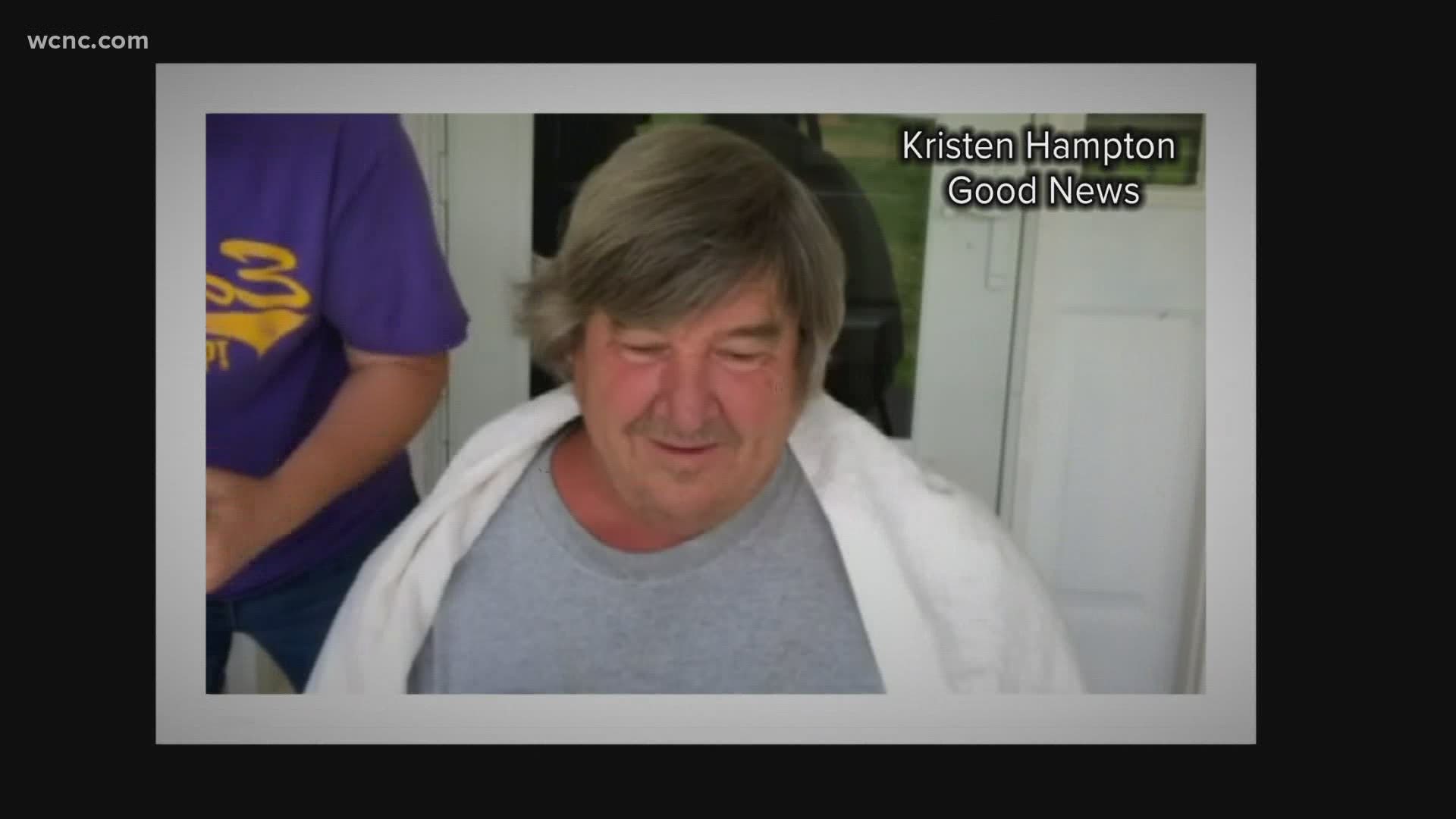 CHARLOTTE, N.C. — For the past year, crops aren't the only things that have been growing on Danny Phillips' farm.

"My hair hadn't been that long since I was a teenager," Phillips reminisced.

With barbers closed down for much of the past year due to the pandemic, and Phillips taking every precaution he could not to get the virus -- he just stopped chopping his hair.

Month after month, it continued to grow. It was grey Bieber look by the end of it all.

It didn't take long for his family and friends to start joking about it.

"Everybody I know was giving me a hard time," he said.

Finally, he knew it was time. And that's when Kristen Hampton of "Good News" entered the picture.

"I said let me cut your hair," Hampton said, who's been a family friend for years.

Hampton had been pestering him for months to take a snip at it.

"And he said absolutely not," Hampton joked.

But she finally got him to come around.

"Kristen turned by front porch into a makeshift barbershop," Phillips said as he chuckled.

Looking at the video, you could call it a front-porch-plucking. Kristen clipped and buzzed his hair and all of it was streamed live on Facebook on one condition.

"I just wanted to raise money for a good cause," Phillips said

The two said they set out to raise at least a couple hundred dollars, maybe even a few thousand if they got lucky. All of the money raised would go to Angels and Sparrows Soup Kitchen in Huntersville.

But when Hampton was done cutting and looked at her phone, she couldn't believe it. Not only did the video go viral around the globe, but they also raised $11,700 and donations continued to pour in.

"Well, that is fantastic," Phillips could be heard on the video stream, beaming ear to ear.

Both of them were stunned by the generosity.

"When she showed me that, literally I had a tear in my eye," Phillips said.

"In the Lake Norman area, it's more affluent and you don't think about the people who are sitting down and don't have food on their table," Cindy Deutsch of Angels and Sparrows Soup Kitchen said.

The money raised will pay for the food and services given out daily, for the next two months.

"It was just an amazing surprise," Deutsch exclaimed.

The dynamic and hysterical duo will tell you it was just a front porch haircut.

"It still shocks me," Phillips said.

However, thanks to 1,600 strangers who watched it live and dug into their pockets to give back, it turned into so much more.

Oh, and Phillips said he's happy with the haircut.

"I'll be getting her to do it every two weeks from now on," Phillips exclaimed as he smiled.

Click here if you'd like to watch Phillips get his haircut -- or if you wish to donate.