The four-time Olympic medalist in swimming said he wants to teach kids how to feel safe around water, saying his parents' goal to keep him safe gave him "purpose." 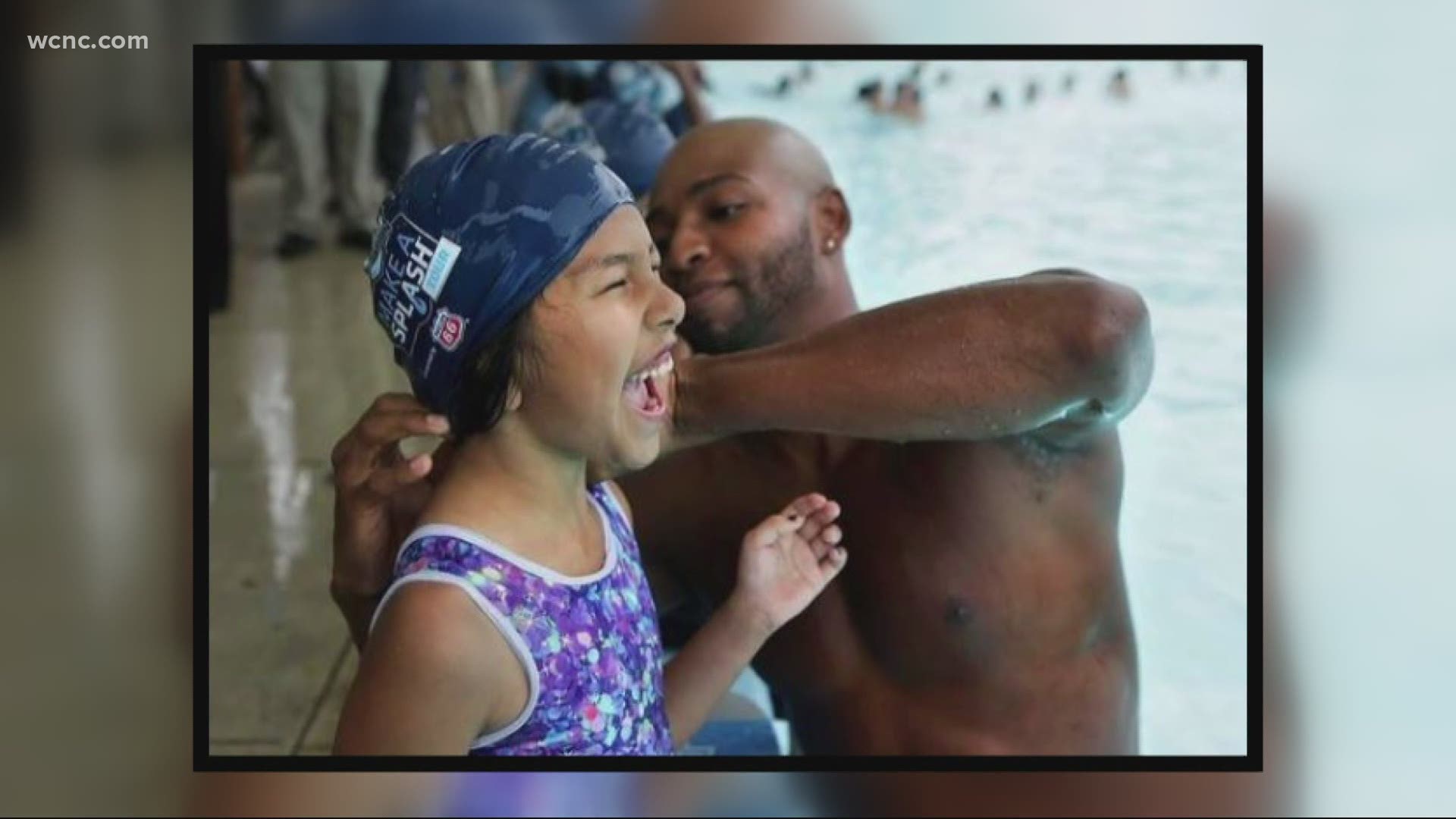 CHARLOTTE, N.C. — Cullen Jones is a four-time Olympic medalist and the first African American swimmer to hold a world record, and while his time competing in the pool may be finished, his work there is far from done.

Since earning his first Olympic medal in 2008, Jones has made it his mission to help others learn how to swim, with a focus on bridging the minority swimming gap and diversifying the sport that changed his life.

"I wanted my platform to be kind of like a Tiger or a Serena and Venus or a Jackie Robinson where it's okay to do this sport -- it's okay. There were people before me, mind you, there were a ton of people before me, but I was blessed enough to be part of a relay that the world saw," Jones said. "I wanted to use that platform to try to be a role model as best I could and a way for me to be able to do that was to get people to understand how important it is to learn how to swim."

It's an experience Cullen knows the importance of firsthand, after nearly drowning at just 5 years old, his parents immediately signed him up for swimming lessons.

"I had some strict parents, that wasn't me -- I was terrified -- I didn't want to get back in the water; my mom was like never again, we are going to get you some swim lessons," Jones said. "Depending upon where you are it's very hard to get swim lessons, or it's very hard to even get to a pool. For me personally, I had to take two public buses to get to practice every day when I was 8 years old."

Jones said his desire to keep up with the lessons motivated him to push through the challenges. Speaking on the challenges he faced, he recognized the country's Civil Rights movement and the challenges others faced trying to do something as seemingly simple as attending swimming lessons.

"It is an issue, when you look at the past, it's grim and dark," he said. "We have the Civil Rights in 1964, 1963 that iconic picture of a bunch of Black kids in a hotel pool and a white manager is pouring bleach on them. That was one of the big pieces to start the Civil Rights movement, was that image and what happened. It's a big issue. It's something that we still deal with to this day. Is it getting better? In some ways, in some respects yes when you have a Simone Manuel or Lia Neel or Reece [Whitley]. I can go down the list now and I couldn't do that before."

After things came full circle for Jones with his success in the Olympics, he knew immediately how he wanted to give back. He said he's been working with an initiative called "Make a Splash" for the past 13 years, starting after he got his first gold medal in 2008.

"That was the focus, is to try to never have a parent go through what my mom went through with me almost drowning and then having to make that change, because we see especially in the Black community, parents that have that issue with water, or a negative experience around water tend to project that onto their children," Jones said.

Jones said he wants to teach kids how to feel safe around water, saying his parents' goal to keep him safe ended up giving him "so much purpose."

"I'm still, even retired, pushing how important it is to learn how to swim," Jones said.

Jones also said he hopes his story can inspire other minorities to not only want to learn how to swim, but also compete in the sport.

"When it was me swimming, it was (just) me swimming," Jones said. "Now there's seven different people, actually closer to 10 different people that are within striking reins of making the Olympic team. That's amazing and they're all people of color, well I'll just say -- they are all Black Americans. That's amazing. That's something that's never happened before. I feel like every day we're pushing that needle."

Coming up on @wcnc tonight @CullenJones joins us for a conversation about the importance of learning how to swim and his mission to bridge the minority swimming gap, while also diversifying the sport of swimming.

Here's a preview of our conversation! ⬇️ pic.twitter.com/6td7FYjmax

The Jones Olympic legacy and passion for the importance of teaching others how to swim may even carry on with his son, Avyn, who before the age of two has already fallen in love with learning how to swim.

"He loves the water -- it's kind of terrifying, I mean he loves it more than even I did as a kid," Jones said. "I would sit and play in the tub for hours, but when he was was a child at 6 months -- at 6 months -- the only way we could stop him from crying was running water. We had to turn the faucet on, my water bill was ridiculous that month, but it calmed him down."

Jones said to this day, his son seems to have a strong love for the water. But if his son wants to do something other than swim, Jones understands.

"I want him to do whatever he wants," Jones said. "If he wants to play basketball I support it. Anything. I just want him to be in sports because I feel like sports taught me so much, and teaches so much about teamwork. It's not all about you, all of those things. I want him to be in a sport  -- that's all that I care about."