The North Carolina Utilities Commission reports water and gas companies in the state are owed more than $250 million from delinquent customers. 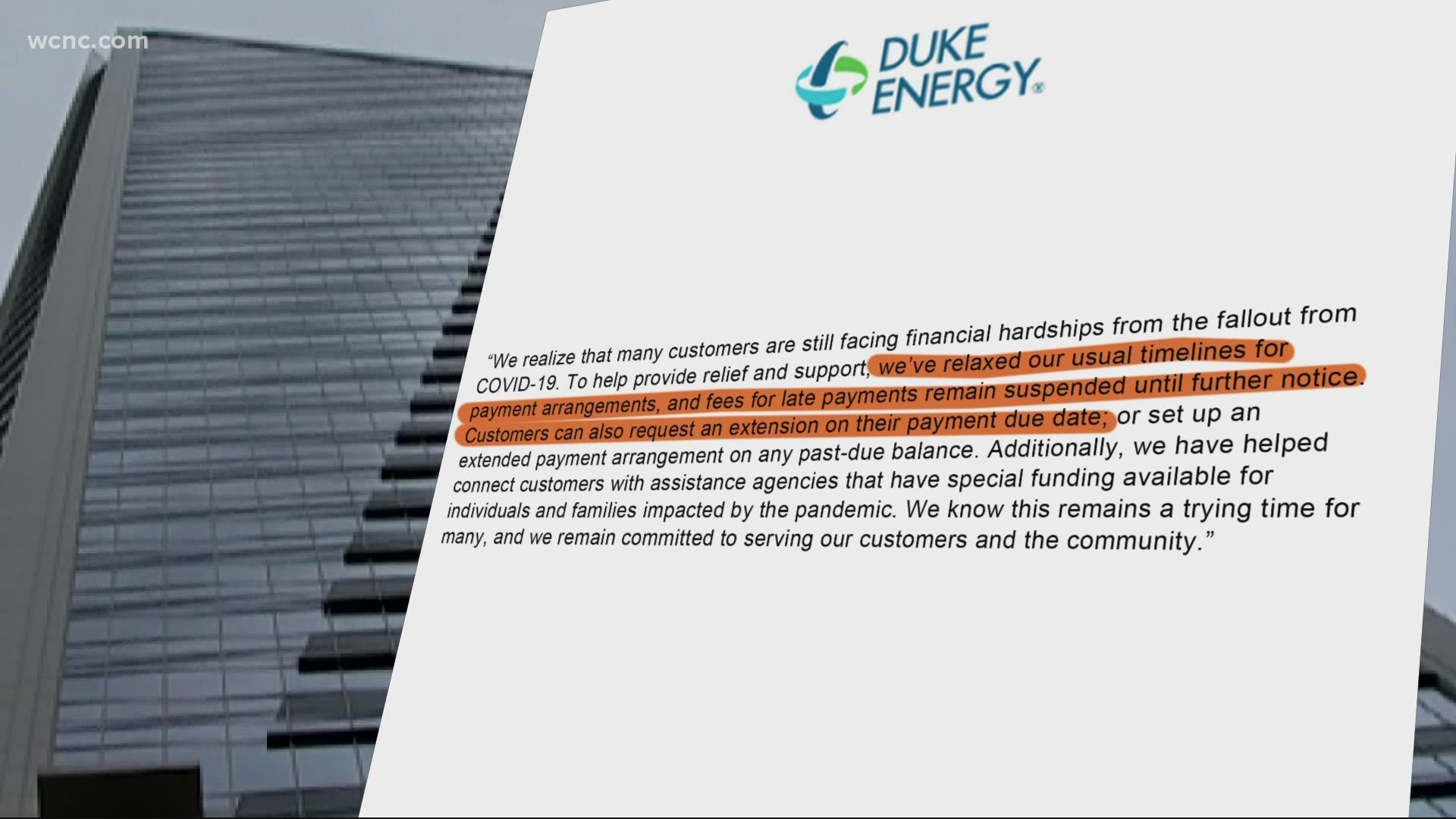 Hull's story is like so many others. She's out of a job due to the pandemic, unable to access unemployment or relief due to system errors, red tape, and tapped-out programs.

For many like Hull, simply waking up each morning with the power still on feels like a gift.

"It gets to the point where, like, I can't tell you how many times I was in tears," she said, her eyes welling. "You know, we are people. We depend on this. This is an emergency to me. I mean, it may not be them, but to me, this is serious.”

The North Carolina Utilities Commission reports water and gas companies in the state are owed more than $250 million from delinquent customers.

Advocates say each story of a family who may potentially end up in the dark is a new heartbreak.

“When I get a call from a customer who ... has an infant and a kid with diabetes and insulin in the fridge and food in the fridge ... customers can tell the utility company that whole story and the utility will still say, 'No, you owe us money,'" senior energy analyst for Appalachian Voices Rory McIlmoil said. “They had no power for eight days. The insulin was ruined. The boy had ended up in the hospital ... they were out of their house for several days. And the utility [company] could have prevented that. That, to me, is the most is the most hurtful and disheartening thing because that's how our system is set up. It's set up to penalize people who can't pay their bills.”

McIlmoil is part of a coalition of racial justice, housing, low-income and conservation groups that sent a letter to North Carolina Governor Roy Cooper, calling for an extension of the utility shutoff moratorium, and for more money to be allocated to help those who can’t pay the bills.

“We have to rethink how we're doing this, how our system is set up and how it treats people and treats their lives as a monetary consequence. Like if you can pay, you can live. If you can't pay. It's not our problem," McIlmoil said.

The North Carolina Housing Opportunities and Prevention of Evictions (HOPE) program, intended to help people pay rent and utilities, was quick to dry up, and while more funding is on the way, advocates say it won’t be enough to meet the immense need.

“That money has been held up in red tape," La’meshia Whittington, deputy director of the nonprofit Advance Carolina, said. "And we're facing utility companies and corporations that can actually reject hope funding and reject the funding that is allocated from our government...a company can reject that funding and still evict someone or still turn the lights off. That's preposterous. And that's what we're facing."

Jovita Lee, a senior environmental justice campaigner for the Center for Biological Diversity, added relief money is also difficult to obtain in the first place, with funding approvals often sporadic and disorganized.

Advocates calling on an extension of the utility shut-off moratorium also admit it will take more than that to truly address the issue.

“There's no silver bullet," Josh McClenney, an energy democracy field coordinator for Appalachian Voices, said. "I don't think any of us wants to portray this as being really simple. I do think we generally have to move away from a system that punishes poor people, predominantly Black and Brown communities for not being able to afford their electricity.”

For now, shut-offs are happening across the state every day.

Utility companies are being encouraged to work with customers on setting up payment plans.

“Utilities [are] a human right," Whittington said. "So is housing, and that's where we have to get to prioritize the people over profit. And we haven't done that well as a nation.”

In a statement, a Duke Energy spokesperson told WCNC Charlotte: “We realize that many customers are still facing financial hardships from the fallout from COVID-19. To help provide relief and support, we’ve relaxed our usual timelines for payment arrangements, and fees for late-payments remain suspended until further notice. Customers can also request an extension on their payment due date; or set up an extended payment arrangement on any past-due balance. Additionally, we have helped connect customers with assistance agencies that have special funding available for individuals and families impacted by the pandemic. We know this remains a trying time for many, and we remain committed to serving our customers and the community.”

Still, Hull, like so many others, hopes tomorrow brings help that hasn't come yet.

“They're making it literally near impossible for people to get this stuff sorted out," she said. "I mean, I'm terrified. It feels like they just don't care."

RELATED: Cabarrus County renters falling behind on bills have a $6.5 million lifeline. Here's how to sign up

McIlmoil added anyone who is unable to come to an agreement with their utility company should file a formal complaint.

"If you feel like your utility is not helping you, is treating you wrong, and is not directing you to resources, or is in trying to work with you on a payment arrangement, contact the attorney general's office and let them know," McIlmoil said. "They will take steps to try to work with the utility and help your situation."

You can file a utility complaint with the North Carolina Attorney General's office here or by calling the office toll-free at 1-877-5-NO-SCAM.