South Carolina spent more than $56,000 on social media influencer marketing over the last year, but refused to release specifics to WCNC Charlotte. 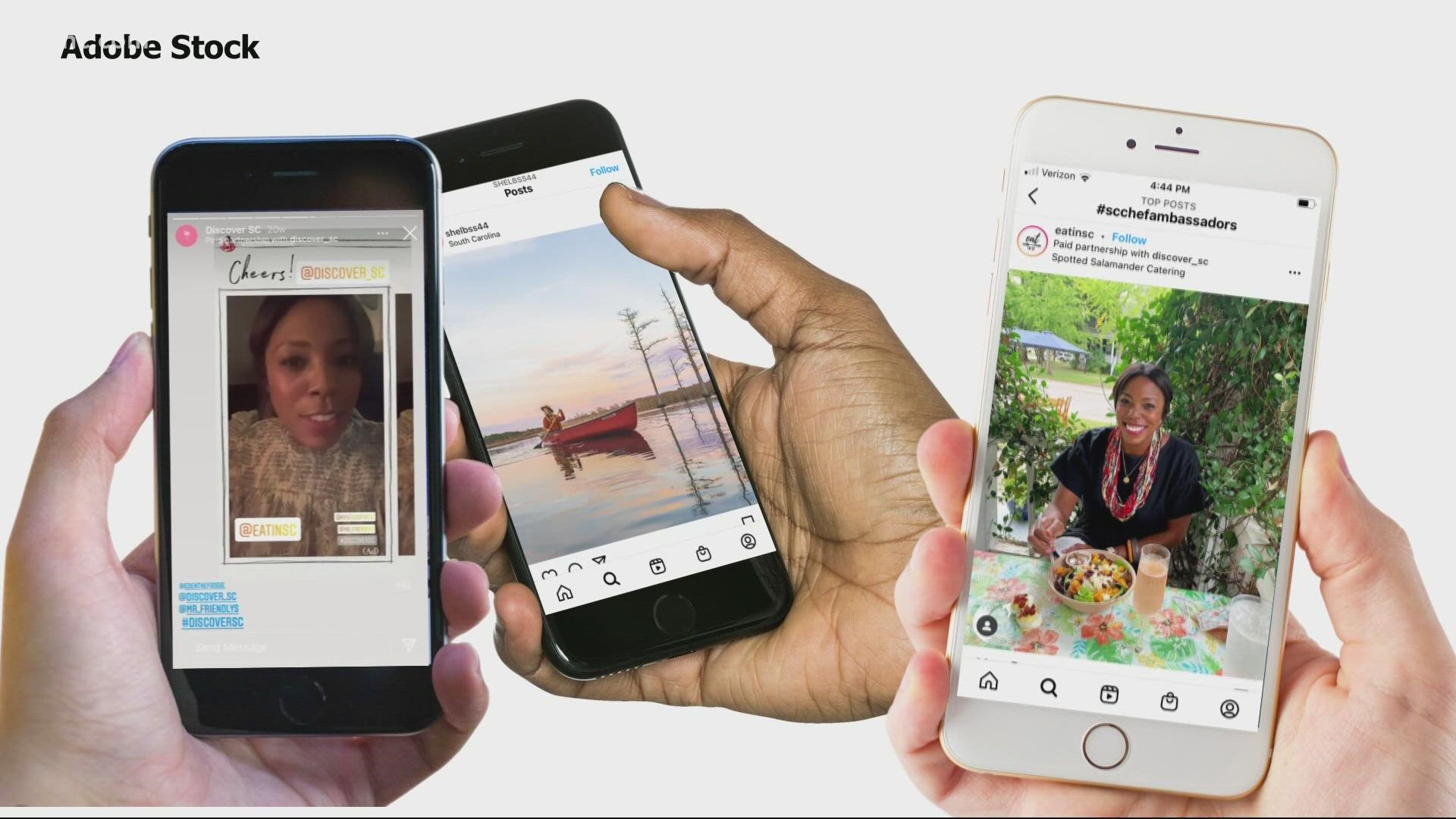 COLUMBIA, S.C. — As the country locked down and people lost their jobs, public records reveal some social media influencers gained work from the government.

A WCNC Charlotte investigation found the South Carolina Department of Parks, Recreation and Tourism and the Charlotte Regional Visitors Authority paid influencers thousands of dollars to write blogs and post pictures and videos on social media in an effort to attract visitors during the COVID-19 pandemic.

South Carolina reports the state spent a combined $56,000 paying and reimbursing two-dozen influencers from March 16, 2020, through June 30, 2021. Corporate Communications Director Sam Queen said the amount the state spent on a handful of influencer campaigns is nearly the equivalent of what it costs to buy a full-page regional ad in Southern Living.

"It was really something that allowed us to pivot quickly so that we could continue to drive interest in South Carolina as a tourism destination. We really feel like we're getting a good return on that investment," Queen said. "The role of an influencer is to kind of become a trusted voice for their followers. It's more meaningful and effective than a flat digital ad. It adds a human element and that's something that audiences really connect with."

"The influencer program has proven to be a really effective tool for us to reach millions of potential visitors who we otherwise would have a pretty hard time reaching," Queen said. "It's just an effective way to get a lot of bang for your marketing dollar."

While there's no evidence anyone visited South Carolina as a direct result, Queen said the program's overall average engagement rate of 7.34%, well above the industry standard, is proof the campaigns worked. She said the state reached more than 2.4 million potential visitors through its influencer program between September 2019 and May 2021.

The agency provided the total amount spent and the names of the 24 influencers, but the state refused to release any content or individual metrics, calling them "trade secrets." A social media search by WCNC Charlotte found some of the paid influencers promoted a pimento cheese recipe at the beginning of the pandemic, as well as state parks and restaurant recommendations. According to Queen, releasing specifics would give competing states South Carolina's playbook.

"We do feel like that is considered a trade secret because it would reveal our marketing strategy," she said. "It's a better use of our public dollars to withhold that information so that it does continue to be commercially valuable."

"When it comes to the specifics of the program, you're just asking the public to trust you, aren't you?" WCNC Charlotte's Nate Morabito asked Queen.

"Well, I do think that our overall engagement rate should give the public confidence that this is working," she said.

"Influencers are, by definition, public-facing," he said.

Bryant believes the public has a legal right to see what taxpayers funded and exactly how each post performed.

WCNC Charlotte is always asking, "Where's the money?" If you need help, reach out to the Defenders team by emailing money@wcnc.com.

"When you hear that, what do you think?" Morabito asked him about the state's refusal to release specifics.

"It doesn't sit right with me the first time I hear it," Bryant replied. "That has nothing to do with trade secrets. That is just public information."

Over in North Carolina, the Charlotte Regional Visitors Authority provided WCNC Charlotte with specifics of its $18,000 worth of pandemic influencer spending, described as a relatively small, yet important part of CRVA's media mix. The CRVA maintains it relies on research in all marketing decisions.

CRVA reported the agency paid $17,000, the majority of its influencer money, to Ugandan-American Jessica Nabongo in October as part of a campaign the agency said supported diversity and inclusion and showcased safe ways to travel to Charlotte. CRVA reported Nabongo's efforts included more than 100 pieces of original content, in addition to general posts about Charlotte, features on 17 local tourism-related businesses and trip descriptions in two of her "Catch Me If You Can" newsletters. According to CRVA, her posts resulted in 687,000 total impressions and 17,400 total interactions. For her specific Instagram main feed posts about Charlotte, CRVA reported the result was an average 8.4% engagement rate over a three-day period.

According to CRVA records, the agency paid three other influencers $350 each to help market the restaurant-focused "Your Table is Ready" digital campaign in August and September. The agency reported by October, the campaign had received more than 175,000 impressions, 131,000 video views and more than 55,000 visits to the campaign landing page and the 101 Restaurants page.

CRVA also reported increased time on the charlottesgotalot.com website and 101 Restaurants page, in addition to more than 200 people sharing their own stories as part of the giveaway connected to the "Your Table is Ready" campaign. Those influencers were @WyneesWorld (TikTok), @Charlottefoodscene (Instagram) and @dailyspecialclt (Instagram), according to CRVA.

Back in South Carolina, the state would only release the results of its pimento cheese recipe campaign -- published on its subcontracted public relations firm's website.

According to Queen, the content reached nearly 67,000 followers, received 24,700 impressions and 2,346 engagements, which resulted in an above industry average engagement rate of 3.51%. While influencers pushed followers to visit the state's website, Queen said the agency doesn't typically track website traffic with its influencers.

WCNC Charlotte's review of South Carolina's influencer list revealed the agency paid its former public relations manager to talk South Carolina food with an influencer in New York. The state would not release specifics of the campaign.

"That was a very engaging and effective campaign for us," Queen said generally.

"This is a former employee of your agency getting money to be an influencer. Is that a conflict of interest?" WCNC Charlotte asked.

"We don't think so and that definitely was a question that we asked," she replied.

Queen said the former manager, whose Instagram handle EatinSC has a little more than 8,000 followers, is well-known in Columbia and a trusted voice.

"In Columbia, (she) is an influencer. People know her. She has a lot of credibility," Queen said.

The agency provided this list of 24 influencers paid with South Carolina taxpayer money:

One of South Carolina's competitors, Visit North Carolina, told WCNC Charlotte the Tarheel State did not pay any influencers for social media posts during the pandemic.

"While there can be great value in influencer marketing, Visit NC has not paid any influencers directly for social media posts during the timeframe," spokesperson Margo Metzger said. "Visit NC's approach has been to focus on traditional advertising, marketing and brand partnerships, so any social posts by individuals would be in the category of added value."