Malek Moore is accused of killing Gabryelle Allnütt, a Hurricane Ida evacuee in Charlotte, and is a person of interest in a Greensboro homicide. 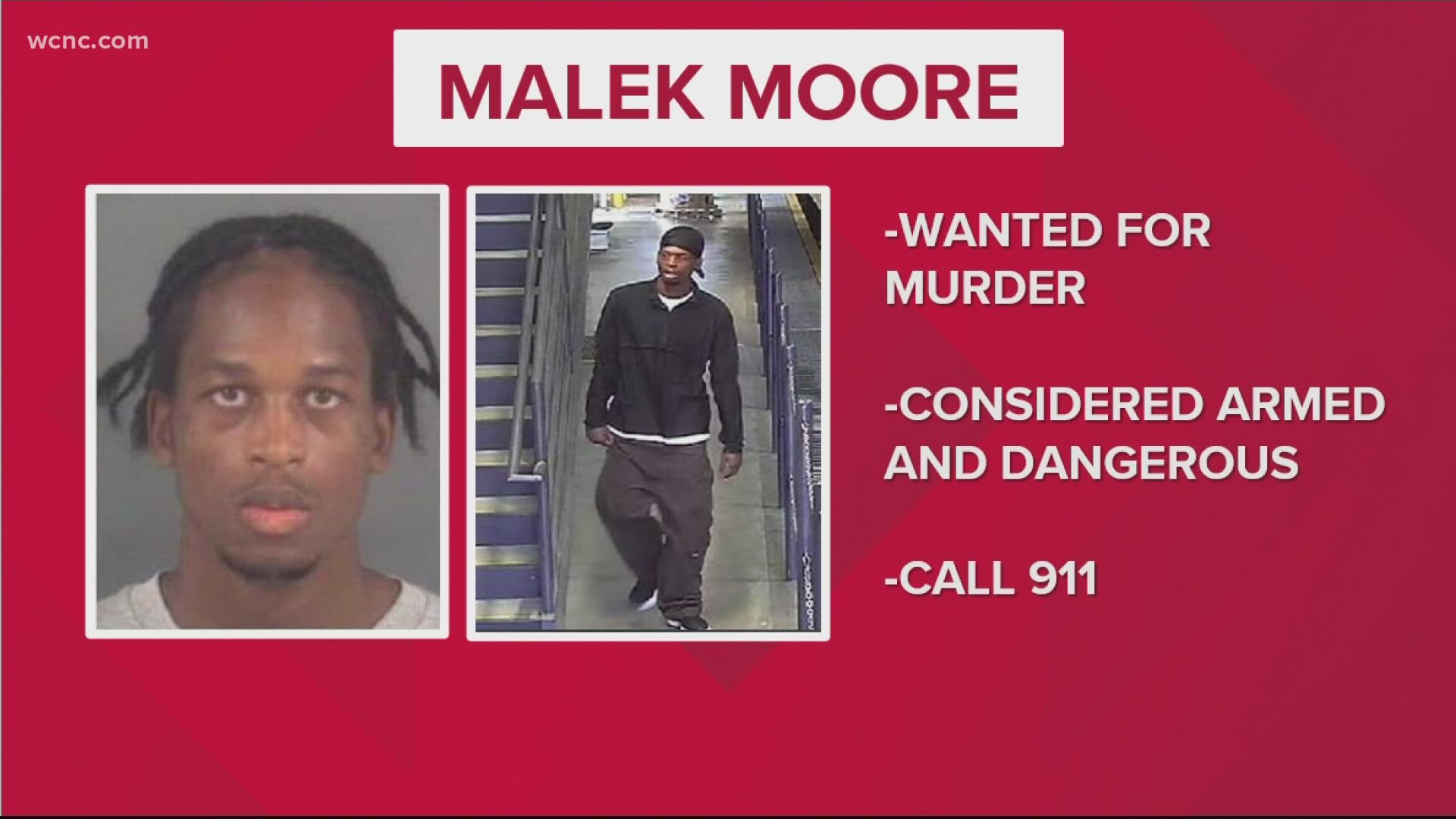 An "armed and dangerous" suspect wanted for allegedly killing a Hurricane Ida evacuee in Charlotte Sunday night is also identified as a person of interest in a Greensboro homicide, the Greensboro Police Department confirmed Tuesday.

Malek Moore is wanted in Charlotte on charges including murder and kidnapping for the Sunday killing of Gabryelle Allnütt. In Greensboro, investigators have also identified Moore as a person of interest in the Friday killing of Christian Mbimba, 21, of Nashville, Tennessee.

The FBI is assisting CMPD and Greensboro PD with the search. The FBI said he could be traveling to South Carolina or Virginia.

The #FBI is assisting @CMPD & Greensboro PD with the search for Malek Moore. He is wanted for two murders and could be traveling to SC or VA. Call 911 if you see him. Do not approach him. pic.twitter.com/pVRyCbz7bq

Moore, 29, is accused of killing Allnütt, 29, of New Orleans, Sunday night in Charlotte's NoDa neighborhood north of Uptown. The killing is believed to have occurred around 10 p.m. in 400 block of E. 22nd St., which is located along the Norfolk-Southern railroad yard near Parkwood Avenue. The Greensboro homicide, which occurred around 11 a.m. in the 2800 block of Patterson Street, also occurred adjacent to a railroad yard operated by Norfolk-Southern.

Earlier Sunday, Moore is also accused of assaulting a woman on the adjacent Little Sugar Creek Greenway near Cordelia Park.

After the accused killing, investigators believe Moore broke into the Exchange at 36th Street, a market and bar in the heart of the NoDa neighborhood.

Detectives are requesting the public's assistance in locating Malek Moore, DOB: 06/01/1992, who is wanted for the murder of 29-year-old Gabryelle Allnutt. pic.twitter.com/ir9B1QvkM5

Moore is considered "armed and dangerous." He is believed to have cut his hair since this earlier mugshot was taken.

"We need the eyes of the community everywhere," CMPD Violent Crimes Division Capt. Joel McNelly said Tuesday. "If you see him, do not approach him."

Police received a report Wednesday evening that Moore was seen in the area of Charlotte's Elizabeth neighborhood on Weddington Avenue. CMPD said officers "responded but were unable to locate anyone or confirm that he was actually in that area at any point tonight."

Regarding Elizabeth/Chantilly police scene: Officers received info from a community member indicating that Malek Moore may have been in that area. Officers responded but were unable to locate anyone or confirm that he was actually in that area at any point tonight. @wcnc

Moore is known to have previously traveled by train. CMPD investigators have notified local and regional railroad operators of their search.

Moore, who was also wanted for violating his parole on earlier charges, is now wanted on charges including murder, kidnapping, burglary, breaking and entering, and larceny. Records with the North Carolina Department of Public Safety showed previous offenses for robbery, larceny, and breaking and entering in counties including Guilford, Cumberland, and Martin.

Anyone who knows the location of Moore is asked to call 911 immediately.

Allnütt had traveled to Charlotte as Hurricane Ida caused widespread power outages in Lousiana. She wrote about her experience on an Instagram account she used to showcase her clay artwork.

"Posting here to say a big thank you to kind & generous people," she wrote on Sept. 4. "It’s incredible how people have provided shelter, friendship, employment and peace in a situation that is so unplanned and financially devastating for most."

The Instagram post above contains a lengthy caption about Allnütt's evacuation. Since her death, comments have been added to memorialize Allnütt.

"I am beyond fortunate to have had a friend to evacuate with and their community accept us with open arms and hearts," she continued.

Allnütt was a youth instructor at the New Orleans Academy of Fine Arts. In a Facebook post from August, they described her as a "self-taught ceramicist with a background in art history and child development."

Meet our Youth Instructors! ~ Gabryelle Allnütt is a self-taught ceramicist with a background in art history and child...

She studied at Stony Brook University on Long Island before moving to New York City, where she trained with the Metropolitan Museum of Art and taught classes at the 92nd Street YMCA, according to the New Orleans Academy of Fine Arts. She would continue teaching art and ceramics to kids when she moved to New Orleans.

As the search for Moore continues, the Charlotte Mecklenburg Police Department has patrols throughout NoDa, Optimist Park, Villa Heights, Belmont, and surrounding neighborhoods. Officers are patrolling in vehicles, on bikes, on off-road vehicles, and on foot along the streets, parks, and greenways.

Anyone with information about this incident is asked to call 911 immediately. Calls can also be made to Crime stoppers at 704-432-TIPS or online at http://charlottecrimestoppers.com/.