CMPD called to 5 violent incidents within a two-hour span 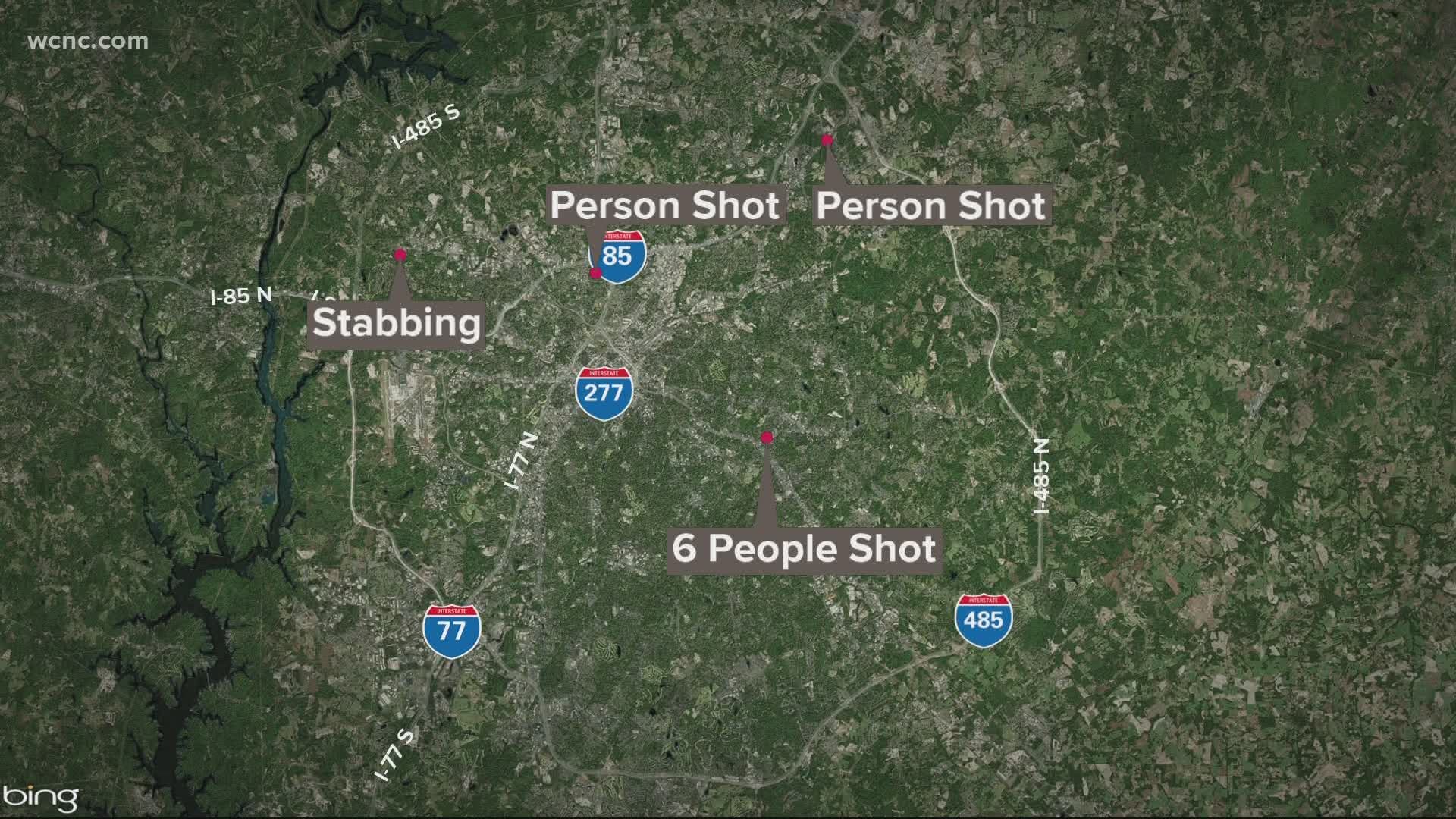 CHARLOTTE, N.C. — A violent night on the streets of Charlotte Saturday night. Charlotte-Mecklenburg Police responded to multiple incidents within just over a two-hour span.

CMPD officers were called to five incidents, including four shootings and one stabbing.

At 8:33 p.m. officers were called to the 2100 block of Newland Road for reports of a shooting in north Charlotte.  Officers arrived and located a male who had been shot once in the upper back. He was alert and conscious and was transported to Atrium Health’s Carolina’s Medical Center with non-life threatening injuries.

The investigation is ongoing as detectives are working to determine a motive.

Just 25 minutes late at 8:58 p.m. CMPD responded to the 4900 block of Albemarle Road for a shooting in southeast Charlotte. When officers arrived a crowd of people began actively leaving the scene.  The officers secured the crime scene and located evidence indicating that firearms had been discharged in the parking lot shared by several businesses that were closed at the time of the incident.

Police said six people were shot during an exchange of gunfire after a disturbance broke out in a parking lot.  Five of the six victims sustained non-life threatening injuries.  One of the victims is currently in serious, but stable condition.

At 9:02 p.m. at the 4513 block of Hovis Road police responded to a homicide. in northwest Charlotte

Officers arrived and located a male suffering from a gunshot wound. Police said the shooting happened after a disturbance with a known assailant.

The victim was transported to Atrium Health’s Carolina’s Medical Center where he was pronounced deceased.  The investigation is active and ongoing as detectives are working to locate the suspect.

Just before 10 p.m., 55 minutes later CMPD was at the scene of a shooting on 9609 N. Tryon Street in northeast Charlotte.

Police said an argument between two men lead to an exchange of gunfire. One of the men sustained a non-life threatening gunshot wound.  The other male remained on the scene and was contacted by arriving CMPD officers.

The fifth incident occurred at 10:38 p.m. in the 808 block of Glasgow Road northwest Charlotte.

CMPD said two men who knew each other got into a physical altercation. One of the men grabbed a knife and stabbed the other in the face.  The victim’s injuries are serious but non-life threatening.

The suspect was arrested and charged with the assault with a deadly weapon.