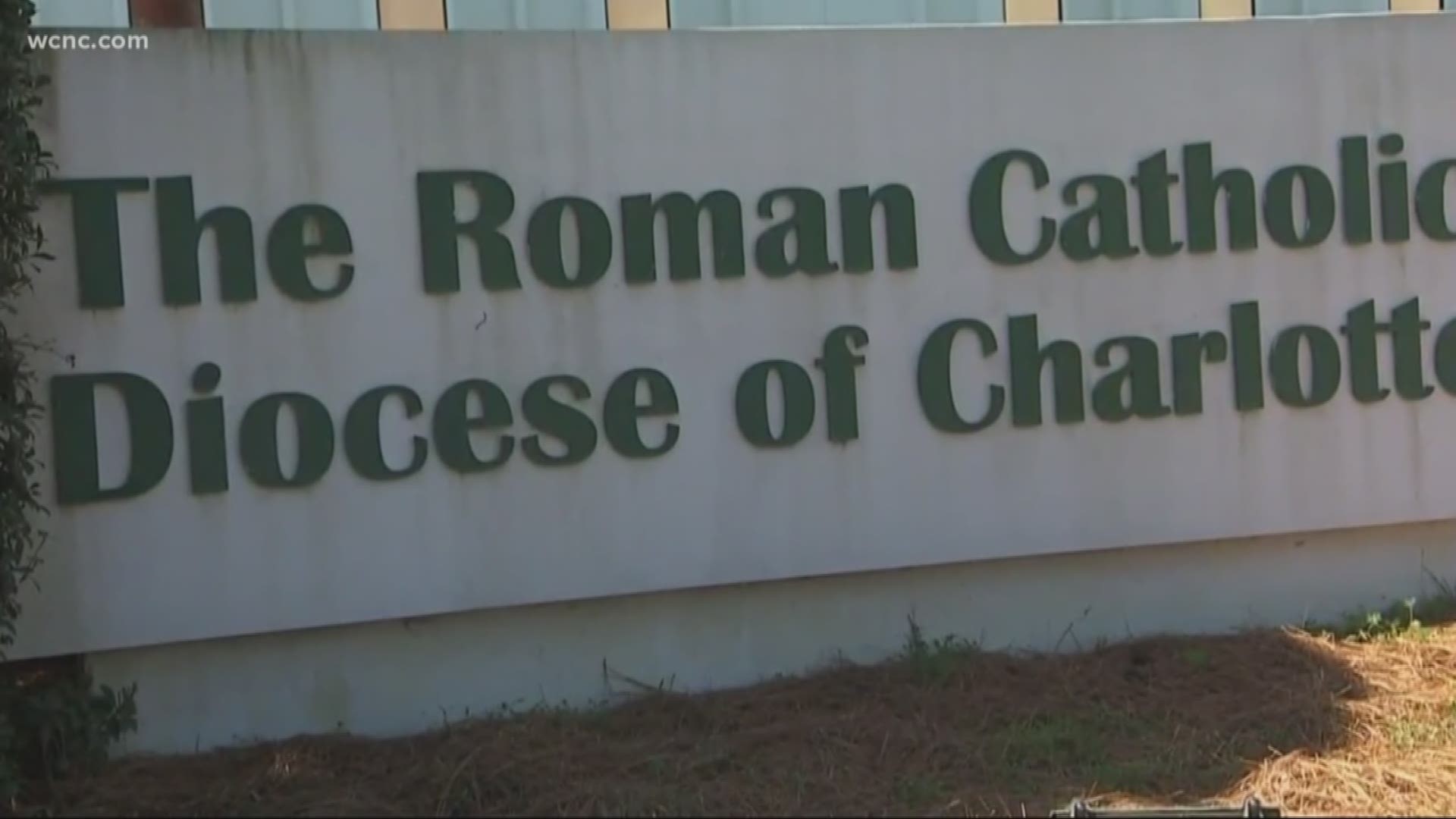 CHARLOTTE, N.C. — The bishop of the Diocese of Charlotte announced Monday that the Diocese plans to release a list of publicly accused priests by the end of this year.

The diocese said they will release that list as soon as their investigation is over, saying they believe finally making the list public is important for the victims’ healing.

Recently pressure on the church though has been higher than ever, with unyielding demands by victims, the public, parishioners and government officials for full transparency.

Recently dioceses across the country yielded to the calls, publicly releasing lists of credibly accused priests.

He can’t reveal much of what he knows, bound by confidentiality, but says he’s skeptical about how complete the list will really be.

“It’s better than nothing but I’m sure I’m going to know names that aren’t on that list," Langson said. "It's a step in the positive step it won’t be complete.”

The Diocese of Charlotte welcomes new procedures announced last week by Pope Francis for reporting suspected child sexual abuse, conducting investigations and protecting victims and whistleblowers, which include a number of measures already in place here in Charlotte.

The new measures apply to the Catholic Church worldwide beginning June 1 and largely reflect comprehensive steps taken in 2002, when the U.S. Conference of Catholic Bishops adopted the Charter for the Protection of Children and Young People. Among other measures, the 2002 Charter mandated zero tolerance of abuse, outreach to victims, reporting allegations to civil authorities and lay expertise on review boards that advise bishops in cases of abuse.

In addition, the Diocese of Charlotte has been conducting a comprehensive review of our historical records to search for any allegations of sexual abuse of minors by clergy who have served in the Charlotte diocese since its inception in 1972. Any allegations discovered in these historical files have and will be forwarded to our Lay Review Board for evaluation and/or further investigation. And, just as we have done since I became bishop in 2003, the names of any clergy found to be credibly accused by the Board in consultation with me will be made public and appropriate disciplinary action will be taken.

This process of reviewing personnel files and other historical records was set in motion last fall, upon recommendation by the Review Board and in consultation with me and other diocesan leadership. To ensure this research is thorough, it is difficult to predict exactly when this process will be complete, however, the diocese is committed to finishing the investigation and publishing a list of credibly accused clergy before the end of the year. Through my discussions with abuse survivors, I have come to believe that a full airing of abuse from the past is crucial in the healing process for victims and for the entire Church.

The Holy Father’s message is clear: We are all called to holiness, to a “continuous and profound conversion of hearts… attested by concrete and effective actions that involve everyone in the Church.” Please join me in continuing to pray for healing for all victims of sexual abuse.

NBC Charlotte reported back in November that the Charlotte Diocese was considering naming accused priests.

The Diocese of Charlotte previously refused to give NBC Charlotte a similar list leading up to our Defenders investigation in September.

"The diocese has the personnel records of all the priests under lock and key and people who need to have access to that cabinet have access to it," Hains previously told us.

Instead of handing over a list, Hains only confirmed names that we found independently, including nine priests with past ties to the diocese linked to at least 15 allegations and millions of dollars in counseling and cash payouts.

"We have not had a new case involving clergy since 2004," Hains said.