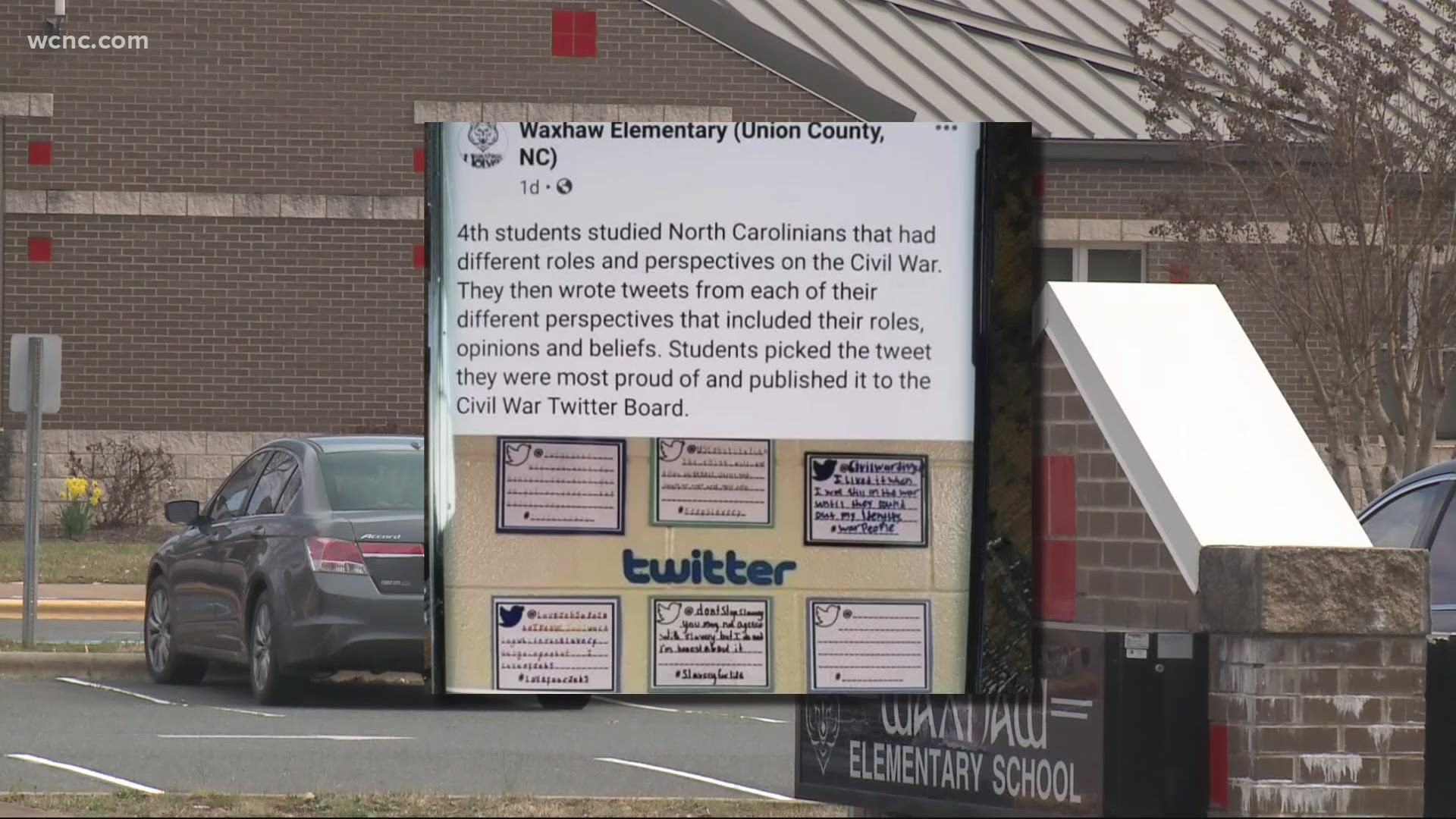 According to a now-deleted post on the Waxhaw Elementary Facebook page, fourth-graders were given roles from the Civil War and were instructed to write tweets from those perspectives.

The students then selected the tweets they were most proud of, and the teacher posted the tweets on a Twitter Wall billboard in the school’s hallway.

The students wrote things like, “#slaveryforever” and “#slaveryforlife.” The school then shared pictures of the assignment on their public Facebook page. None of the tweets shared in that post were anti-slavery.

"I rolled over, saw the email, looked at the pictures, and thought immediately, ‘This is a slap in the face. I cannot believe this,'" Kimberly Morrison-Hansley, a parent of a Union County student, a former school board member, and current member of the local branch of the NAACP, said.

Fourth and fifth graders from other classes who did not participate in the assignment were able to view all of the tweets highlighted on the wall.

“You have these kids walking by this every single day,” parent Brittany Buford said. Buford lives just over the county line in Mecklenburg but says she considers herself part of the Union County community.

“It’s not surprised that racism and institutional racism continues to rear its ugly head in that community,” Buford said. “There’s nothing else to call it. There’s no second side to this coin. Racism is racism.”

Union County School District leadership issued a stern rebuke of the assignment, issuing a statement that read in part:

“Union County Public Schools is extremely concerned about the fourth-grade activity that took place at Waxhaw Elementary. This type of assignment is unacceptable, and we apologize for offending parents, staff, students and members of our community.”

According to the school district statement, the assignment was part of a research project about North Carolinians during that time.

They were told to write from the perspective of a key historical figure.

The assignments do not mention online which figure the students are invoking.

Superintendent Andrew Houlihan tweeting his disappointment with the assignment.

“Today I was made aware of an elementary school assignment about the Civil War that was racially insensitive and not appropriate,” Houlihan wrote.” I want to be clear: any type of assignment such as this is unacceptable. We are taking this matter very seriously.”

Today I was made aware of an elementary school assignment about the Civil War that was racially insensitive and not appropriate. I want to be clear: any type of assignment such as this is unacceptable. We are taking this matter very seriously and ...

Buford pushed back on the apology.

“You can say that this is not acceptable but the fact is that it took place in the school, it was accepted in the school and the only time it became unacceptable is when it was called to task by members of the community,” she said.

Hansley, who said she has lived in Union County for years and raised children in the school system said this is the strongest statement she has seen against a racially inappropriate incident.

“Finally, for the first time, I felt like Union County Public Schools took ownership,” she said. “That’s how we start, that’s how we can measure growth. Taking ownership of the situation, doing things differently.”

Hansley is part of a diversity and inclusion committee that was created by the Union County School Board in June of 2020 shortly after a board member resigned for posting racially inappropriate comments on his Facebook page.

The committee is comprised of about two-dozen students, community members, and Union County Schools staff. It is expected to make its first set of recommendations about how to create a more inclusive environment next month.

“It really just re-emphasized the importance of this group,” Hansley said.

Other parents have now penned open letters to the community, calling on the school district to bring more diverse voices to the table to be part of the conversation surrounding the Civil War assignment and other matters of inclusivity.

Good evening, I’d like to illustrate a point for you that I hope you'll take to heart. When our students play sports, we recognize that it was one thing to study a playbook, and another to run the route. It's one thing to understand the physics of a perfect spiral, and another thing for quarterback to put it in action. This is why we reserve time for practice. Because it's one thing to know something intellectually, and other to experience it. Diversity, inclusion, and understanding the impacts of racism across our system work much the same way. Fortunately, there is no way for yourself and many others within UCPS administration to experience these impacts. This is why it is so important to bring people to the table who do. There is a reason why the best quarterback coaches in the NFL once played football at a highly completive level. They understand how it feels, so they can also teach, inspire, and offer support and solutions. Without bringing to the table people with experience in the topic at hand, you will always fall short. You will be studying a playbook and physics manual, without benefitting from practice. It's one thing to understand something intellectually, and another to live it. UCPS needs people at the table with a wealth of experiences - most importantly, in this context, Black community members. You need to be able to hear their experience firsthand. Listen to the lived experience. Understand the impact. You need to be able to hear directly from the people you want to benefit, what they need to feel supported. You have, fortunately, never had their experience. How, without knowing what it is like, can you begin to fix it. How can you solve a problem if you don't fully understand what it is? Until you are willing to bring to the table the very community you need to support, your actions will always fall short. You will always be Monday night quarterbacking. That has never resulted in a winning game the Sunday preceding, and it never will provide a winning solution here. You practice how you want to play. Put into practice listening to and raising up marginalized communities by bringing them to the table. Only once you put that into practice will you see results where it counts - raising up and supporting all of your students, parents, and this community. You have not brought any community members to the table that represent my community. Choosing people who ideals align to yours and your comfort...will lead us back here every time.

Buford, who has a kindergartener and a middle schooler, said she has faced challenges surrounding race and inclusion in her children’s schools as well.

She said she is worried not only about this assignment but also about what else students may have experienced.

“If you believe as an educator as an administrator that this is okay to display in the school outwardly, to display on social media, what other aggressions are being driven within that classroom?” Buford asked.