Gibbie Harris told other health directors she supported "some level of children in the school setting." One day later, she chose not to recommend it for CMS. 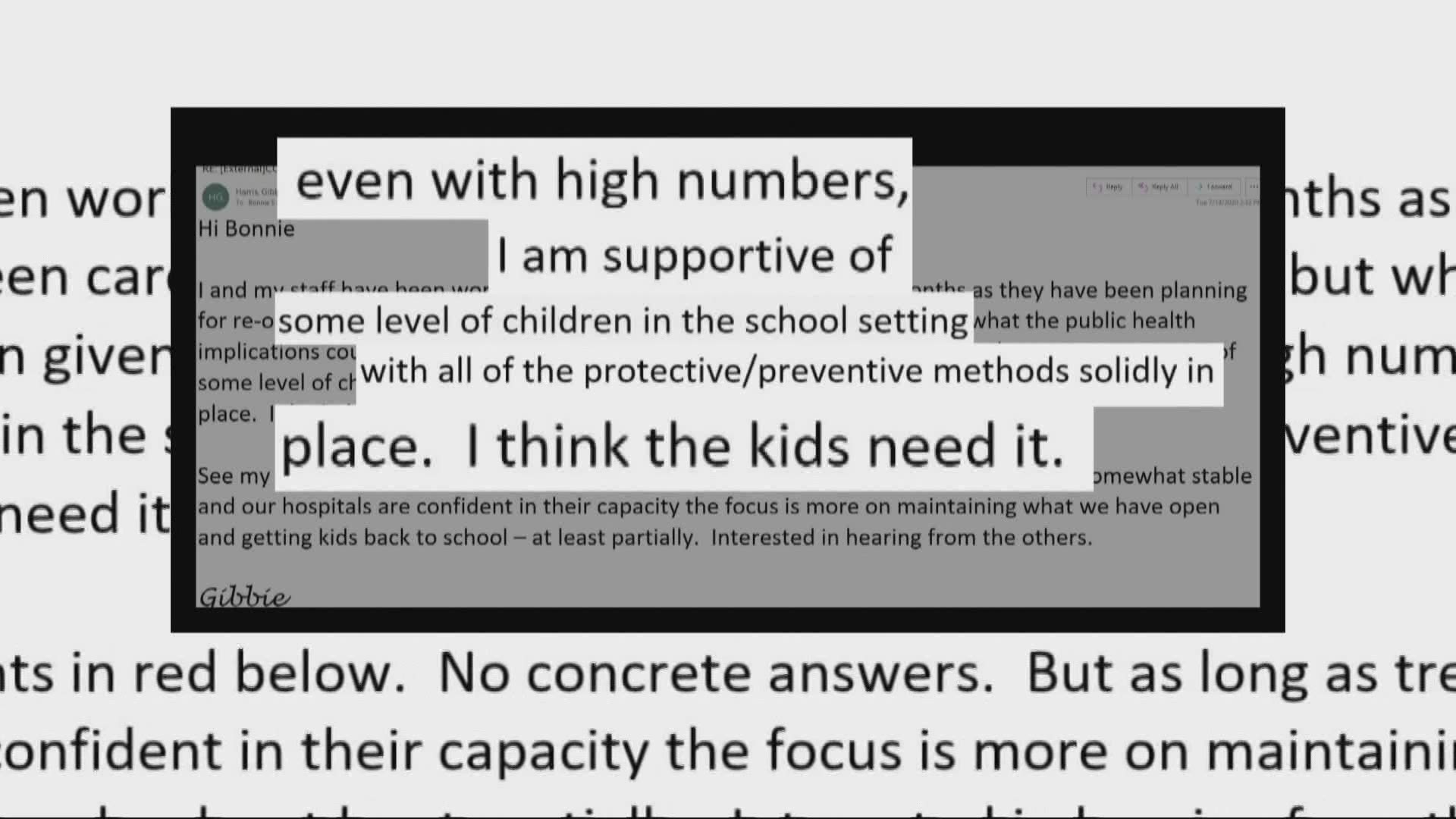 MECKLENBURG COUNTY, N.C. — Just one day before the Charlotte-Mecklenburg Schools Board of Education spent hours debating the district's plan for the 2020-21 school year, Health Director Gibbie Harris fully supported sending some kids back to school for in-person learning.

According to emails obtained by WCNC Charlotte, Harris said as long as COVID-19 trends remained stable, the focus could move to getting more children in class.

"I've been careful not to recommend how they do things but what the public health implications could be in given scenarios," Harris wrote in an email to the health director of Cabarrus County on July 14. "Bottom line here, even with high numbers, I am supportive of some level of children in the school setting with all of the protective/preventive methods solidly in place. I think the kids need it...as long as trends are somewhat stable and our hospitals are confident in their capacity the focus is more on maintaining what we have open and getting kids back to school – at least partially."

While Harris shared her stance to fellow health directors behind the scenes, for better or worse, when called upon by the CMS school board the very next day, Harris chose not to make a recommendation. During the lengthy meeting she did not discourage in-person learning and shared the CDC director's recommendation to return to school, but stopped short of giving a recommendation of her own.

"We want children to have the opportunity to be in school and whatever we can do to make that happen, I think we should focus on," Harris said at the board meeting on July 15. "Now, whether that means we're ready in Mecklenburg County or not, I can't make that decision for you."

THREAD: Remember that train wreck @CMSboard meeting on July 15? Aside from the tech failures, I and others were left wondering why @MeckCounty Health Director Gibbie Harris didn't give a recommendation for @CharMeckSchools re-opening. What would she have recommended? #Defenders

In the days that followed, Leigh Altman, a candidate for Mecklenburg County Board of County Commissioners, emailed BOCC Vice Chair Elaine Powell, expressing her disappointment that Harris didn't "make the tough call," initially hoping the district would find a safe way to send elementary students to school.

"At the time, I had hoped for more definitive guidance, because I have a tremendous amount of respect for the public health director...but then I learned over the ensuing weeks that it was actually a little more complicated than that," Altman said.

Altman said her initial email came before she fully understood many employees were terrified to return to school.

"I give (Harris) a ton of grace. It's an incredibly difficult decision and whichever way she would have called it there would have been perhaps life and death consequences and I certainly appreciate the difficulty in making that call," Altman said. "Perhaps she appreciated better than I did four weeks ago that it is more complex than just strictly a question of epidemiology. For example if you have your teachers who just feel they cannot come into the classroom, maybe it isn't strictly a matter of epidemiology. I appreciate that it is more complex and she may have seen that then."

School Board Member Sean Strain, District 6, said Harris' words the night of July 15 left him with a clear understanding of her opinion, which is an opinion he shared then and supports even more so today.

RELATED: Charlotte-Mecklenburg School Board votes for all remote learning to start 2020 school year

"I don't recall a word saying that they were advising that we should keep the kids out of school. in fact, it was the opposite," Strain said of the July 15 meeting speakers. "And all that's happened since then is the prevalence of our known confirmed cases has gone from 2.4 cases per 1,000 residents to 1.0 cases per 1,000 residents. The prevalence of the known disease in our community has fallen by more than 50%."

Citing county COVID-19 data he analyzed, Strain continues to push for "a quick return" to the classroom by the middle of September for Pre-K through 5th grade students.

Strain said even if Harris came out with a formal recommendation on July 15, the majority of the board's mind was already made up.

"Had she said, 'I strongly suggest you send the kids to school,' I'm not sure it would have changed the vote that night," he said.

RELATED: 'We're facing our first challenge' | Top NC health official thinks, after schools, these businesses and venues could reopen next

The board eventually had to move to a full remote plan due to staffing and facility concerns.

While Harris clearly supported a return to the classroom in mid-July, she recently suggested CMS could "safely bring kids back at least part-time" if Mecklenburg County's positivity testing rate drops to 5% or less, assuming there's enough parental and teacher support to return.

"I shared that with our case numbers and hospitalizations in Cabarrus County still increasing, right now having children return to school may not be the best option," Dr. Coyle said of her message to superintendents in Cabarrus County. "If our numbers hold steady or start to trend down a little over 2-4 weeks, that would be a better time to discuss bringing children back to schools."

In a reply, Durham County Public Health Director Rod Jenkins wrote he did not share any recommendations to superintendents, but said he too supports in-person learning.

"I am in favor of kids going back to school but err on the side of extreme caution," Jenkins wrote. "We also acknowledge that there is no perfect plan and this will be a bumpy ride."