Masks are now required at Union Academy after initially being optional. 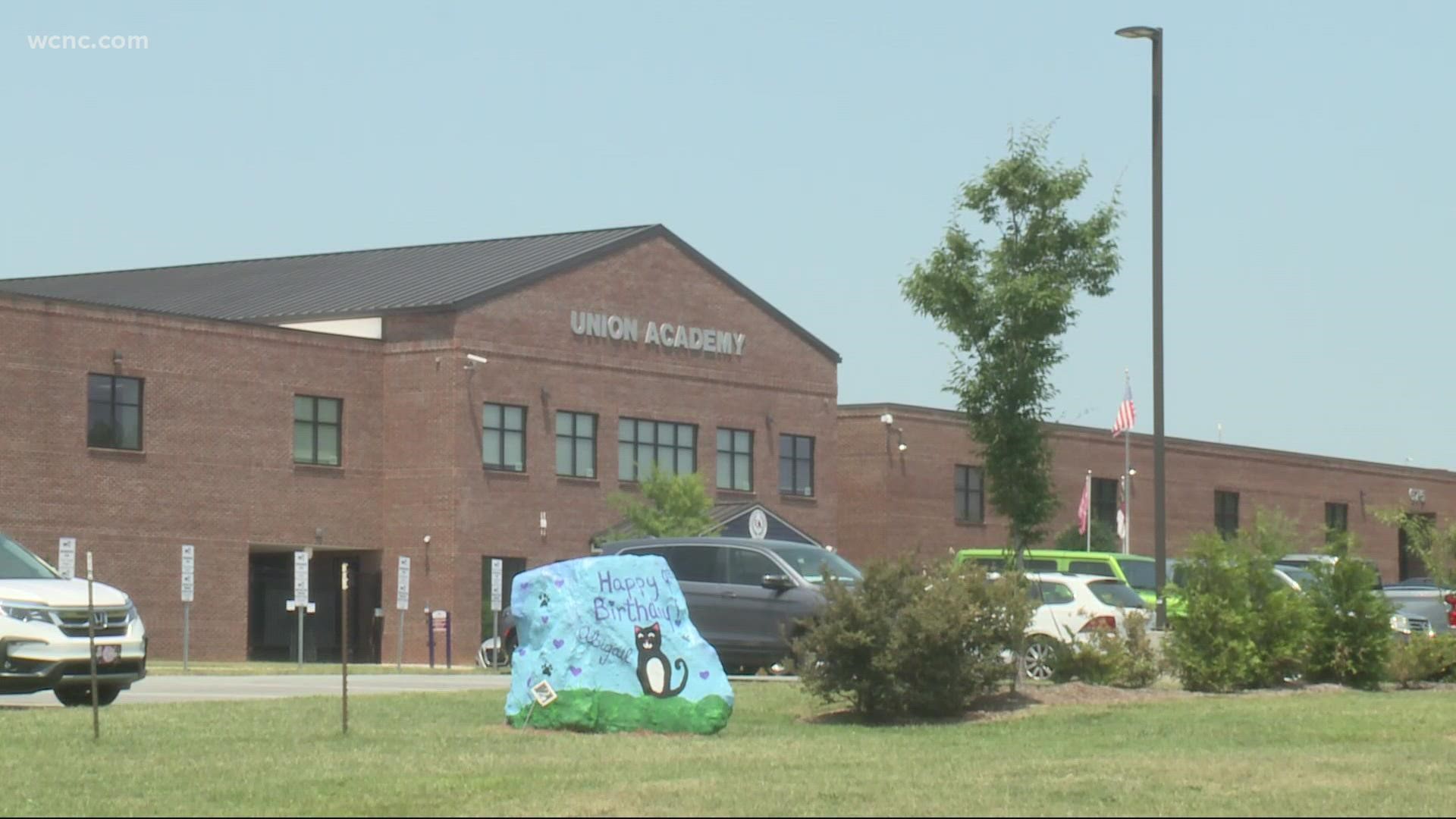 MONROE, N.C. — The number of active COVID-19 cases at Union Academy Charter School in Monroe has doubled to 30.

According to the Union Academy COVID-19 dashboard Tuesday, six K-4 classes are currently quarantined in addition to some students in the middle and high school. Union Academy told WCNC Charlotte that more than 200 students were quarantined. An exact number was not available, as contact tracing was still being conducted.

In a press release issued Monday, the school said they had 14 active COVID-19 cases and more than 150 students and staff quarantined due to exposure. This prompted the school, which was originally mask optional, to instate a universal mask mandate indoors.

“If we had been fully masked -- all of our staff and students last week -- we would have had 14 or 15 students in quarantine, not 150,” Marshall said.

“We were required to quarantine one class last week, and now we’re up to four classes that have quarantined,” said Marshall. 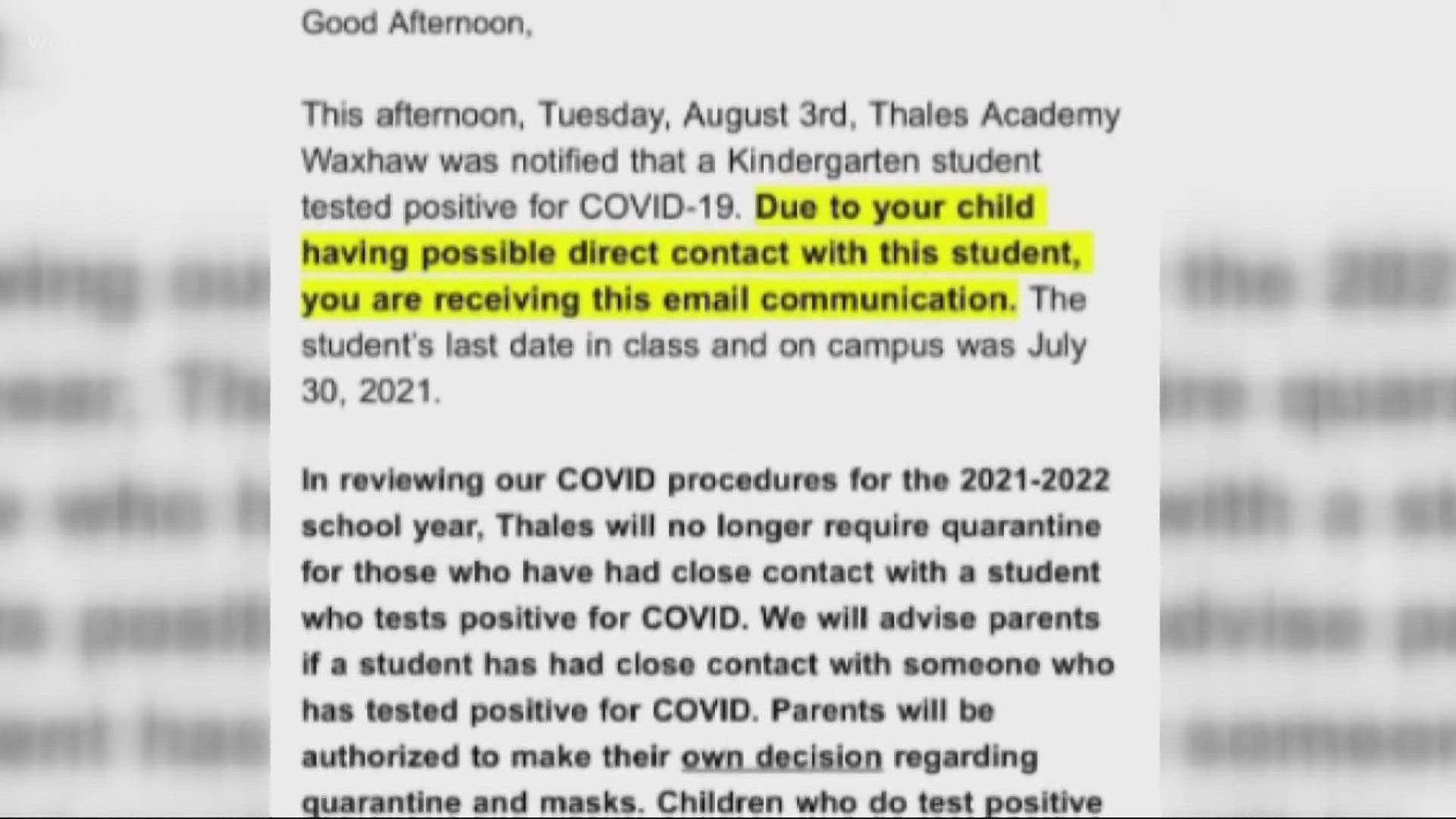 At the start of the school year, Marshall said masks were essentially optional, as the school followed a more accommodating exemption policy, in which exemptions were approved for any reason without exception.

But now, with a spike in COVID-19 cases, the Board made the decision at a regularly scheduled meeting, July 31, to implement a universal mask mandate, allowing only for documented medical reasons.

“We feel like going to the universal masking of all of our community, indoors, is absolutely the right decision at this time,” said Marshall.

In today’s morning message, Mr. Marshall shares the importance of being compassionate.

Marshall said the decision will ultimately help keep students in school, citing the StrongSchoolsNC Toolkit, which allows an exception to required quarantine. It states, “Students who are not fully vaccinated after a close contact in a classroom or other school setting if masks were being worn appropriately and consistently by both the person with COVID-19 and the potentially exposed person do NOT need to quarantine” (Updated July 29, 2021).

Marshall also added that “For those students who have been vaccinated, they do not have to quarantine.”

Most of the cases he says, however, are among the elementary grades.

One of those parents is Mike Stack, whose daughter attends the school. He said the recent positive COVID-19 cases hit too close to home, citing the death of the school’s middle school teacher and coach Ken Stanley who died earlier this year after a battle with COVID-19.

“Given that we lost Mr. Stanley last year to this I would have thought there would have been more safeguards in place to want to start off in the right place,” said Stack. “How many more staff maybe were infected, or they brought this home to other family members? he asked.

Other parents, however, vocal against the mask mandate, saying they believe the cases were likely brought in from home since they appeared so close to the start of school.

“I would definitely prefer to not have him wear it all day,” said parent Penny McCumber, whose son attends the school.

The school says the universal mask mandate will remain in place until the next Board meeting on Sept. 2.

All of WCNC Charlotte's podcasts are free and available for both streaming and download. You can listen now on Android, iPhone, Amazon, and other internet-connected devices.