The letter states lawmakers have heard from countless constituents who have expressed strong opposition and grave concerns regarding requiring proof of vaccination. 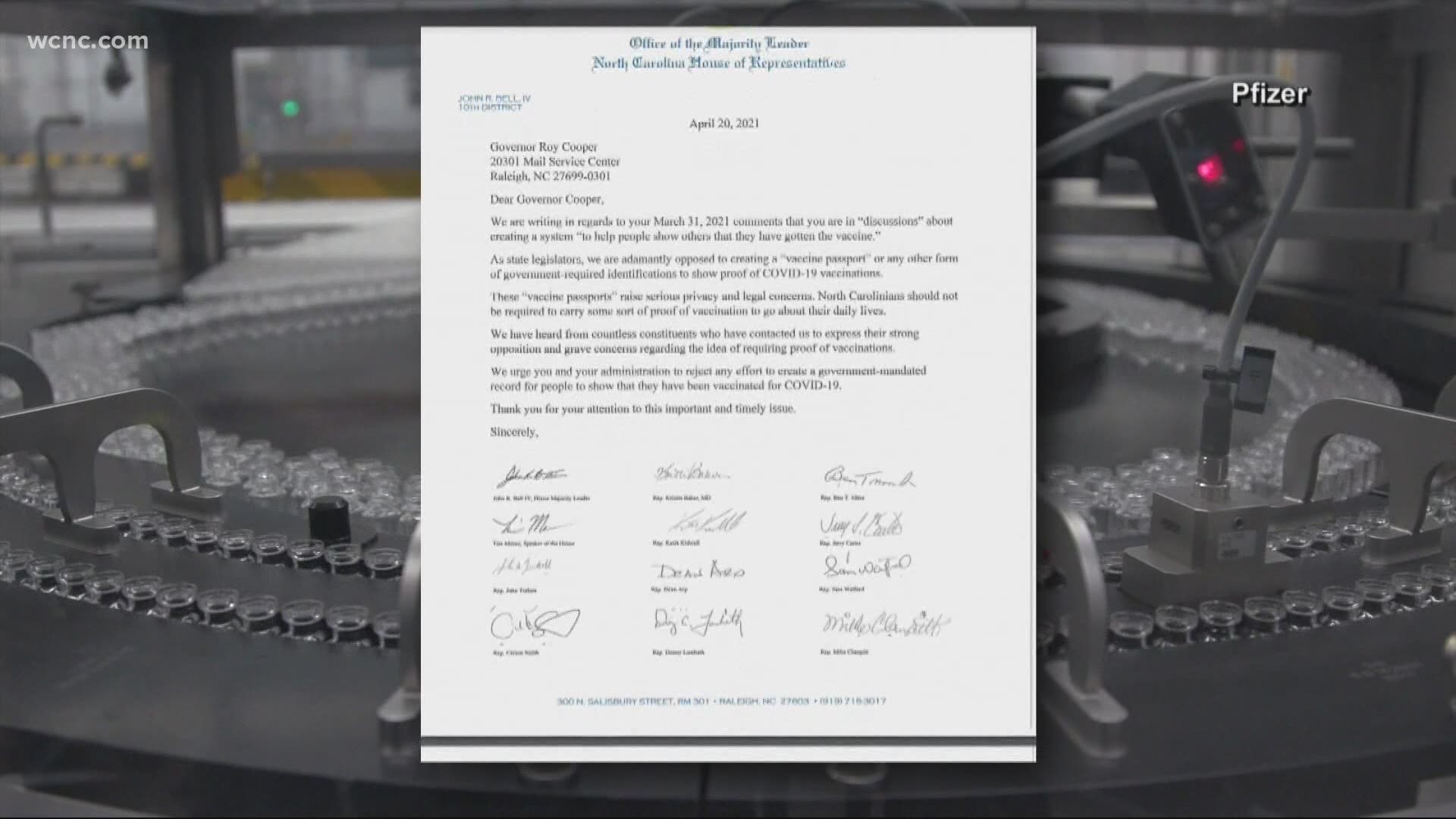 Sixty-five North Carolina House Republicans sent a letter to Governor Cooper Tuesday opposing a vaccine passport or any other form of government-required identification to show proof of COVID-19 vaccination.

The Republican lawmakers said a vaccine passport raises serious privacy and legal concerns, and North Carolinians should not be required to carry some sort of proof of vaccination to go about their daily lives.

"I don't think that there should be any type of a medical procedure that we're going to require anybody to have in order to freely move about the United States of America,” Rep. Keith Kidwell, R-District 79, said.

Kidwell also filed a bill earlier this month that he said would prevent any venue from not allowing people to enter because they’ve not had any medical procedure or vaccination.

"Next year do we say, ok, you have to have the flu vaccine? Or you have to take aspirin to come into this building? Or do I have to go have a nose job?” Kidwell said. “I don't know. Where does that end?”

Today, Gov. Cooper announced that North Carolina hopes to lift mandatory social distancing, capacity and mass gathering restrictions by June 1. The more we encourage people to get their shots, the sooner we can put this pandemic in our rearview mirror.https://t.co/NOIccm9vpQ pic.twitter.com/OHgZImbgJX

Dustin Chicurel-Bayard, director of communications for ACLU of North Carolina, said there are also equity issues surrounding a vaccine passport, especially if it is exclusively digital.

“There are a lot of people who do not have access to smartphones, and having a digital-only passport would exclude lower-income communities and disproportionately deprive communities of color the ability to access certain areas or privileges,” Chicurel-Bayard said.

“Anything that would allow law enforcement to check in when people have had that passport scanned would be very concerning, and I think it’s something North Carolinians would reject,” he added.

Instead of focusing on a vaccine passport in the short term, Chicurel-Bayard suggested that the focus should be on distributing the vaccine to as many people as possible.

RELATED: Vaccine passports are under discussion, a law and ethics expert weighs in

“I think the focus right now should be making sure that people have equitable access to the vaccine,” Chicurel-Bayard said.

North Carolina Governor Roy Cooper was asked about his stance on vaccine passports at a news conference in early April but did not give a direct answer.

Cooper replied, ”Anybody who wants to get a record of their vaccine should be able to get that record.”