'Your mindset has to be to attack it' | Back at work, Sen. Tillis takes an aggressive approach to cancer diagnosis and recovery.

For the first time, the senator talks to Wake Up Charlotte's Ben Thompson about his diagnosis in hopes it'll stop the stigma associated with prostate cancer. 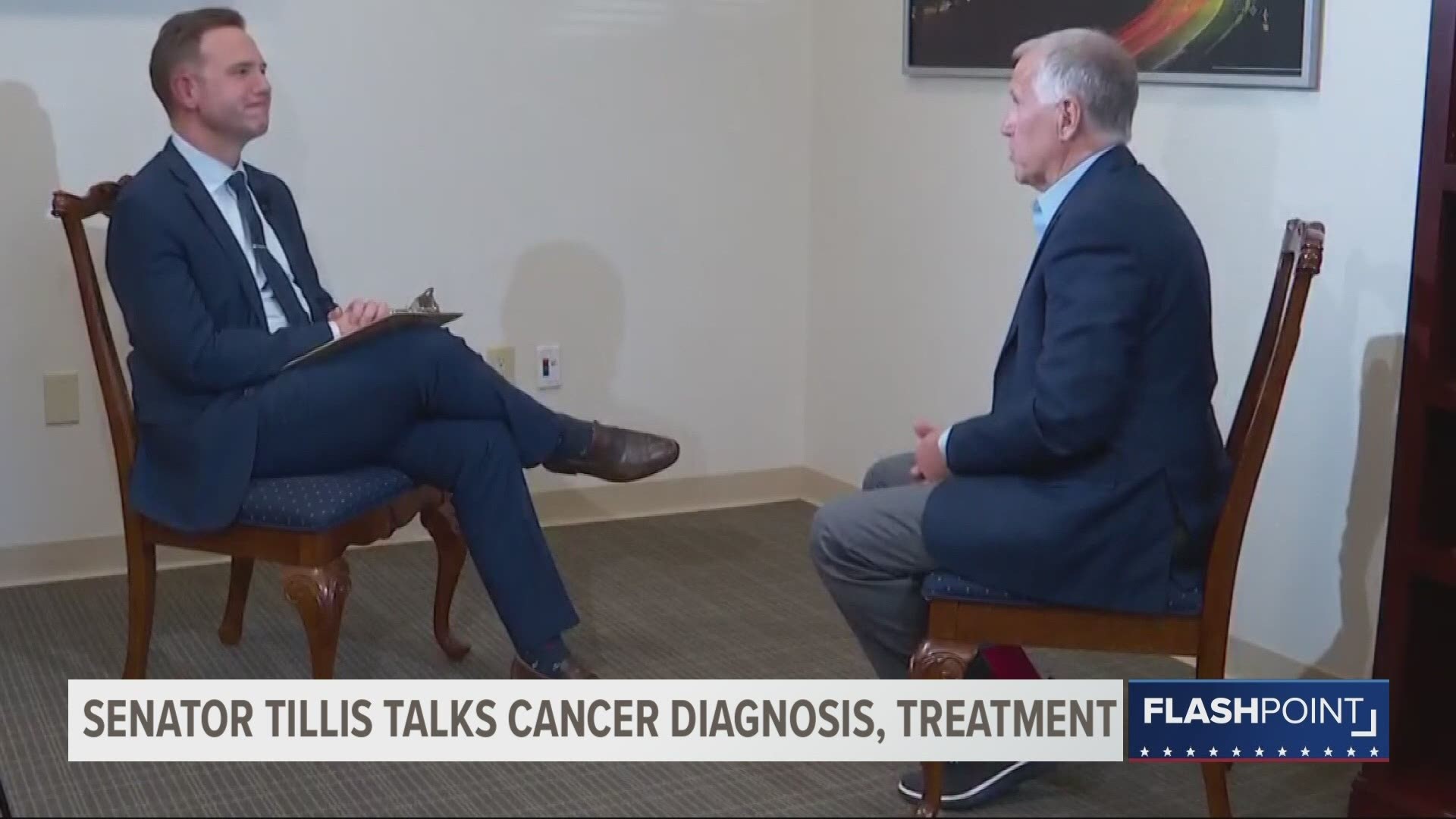 CHARLOTTE, N.C. — Weeks after surgery to remove prostate cancer, Sen. Thom Tillis is already back at work in Washington.

"I feel great. Came out of surgery with the typical post-operative challenges. But that lasted for about a week," Tillis said, in a recent interview with Wake Up Charlotte anchor Ben Thompson.

Tillis and Thompson both share family histories of prostate cancer, which is a leading risk factor.

Tillis says his high-profile job has helped keep him focused.  He chose surgery over other, less aggressive treatment options like radiation or hormone therapy.

"Quite honestly, part of it had to do with my official duties. I had to find one I was willing to accept the risk of the side effects, but also be able to do it within the contours of a tough schedule."

Tillis said his wife Susan and other family members were still processing the news when he started making an action plan.

"I was already in project mode to figure out how we'll beat this. But it took my wife and some of the family members a bit more time," Tillis said.

3.5 million men in the U.S. are living with a prostate cancer diagnosis. The various treatments come with side effects that range from loss of sexual drive to urinary incontinence. It's estimated 34,000 men die every year from prostate cancer. Still, it's considered to be one of the more treatable forms of cancer.

Thompson's family knows firsthand the struggles and decisions that come with the diagnosis and subsequent treatments.  His dad Pete was diagnosed in 2007.

"You do hear in the beginning it's slow-growing cancer. And if you do have cancer, this is one of the better ones to have," Noreen Thompson said, Ben's stepmom. 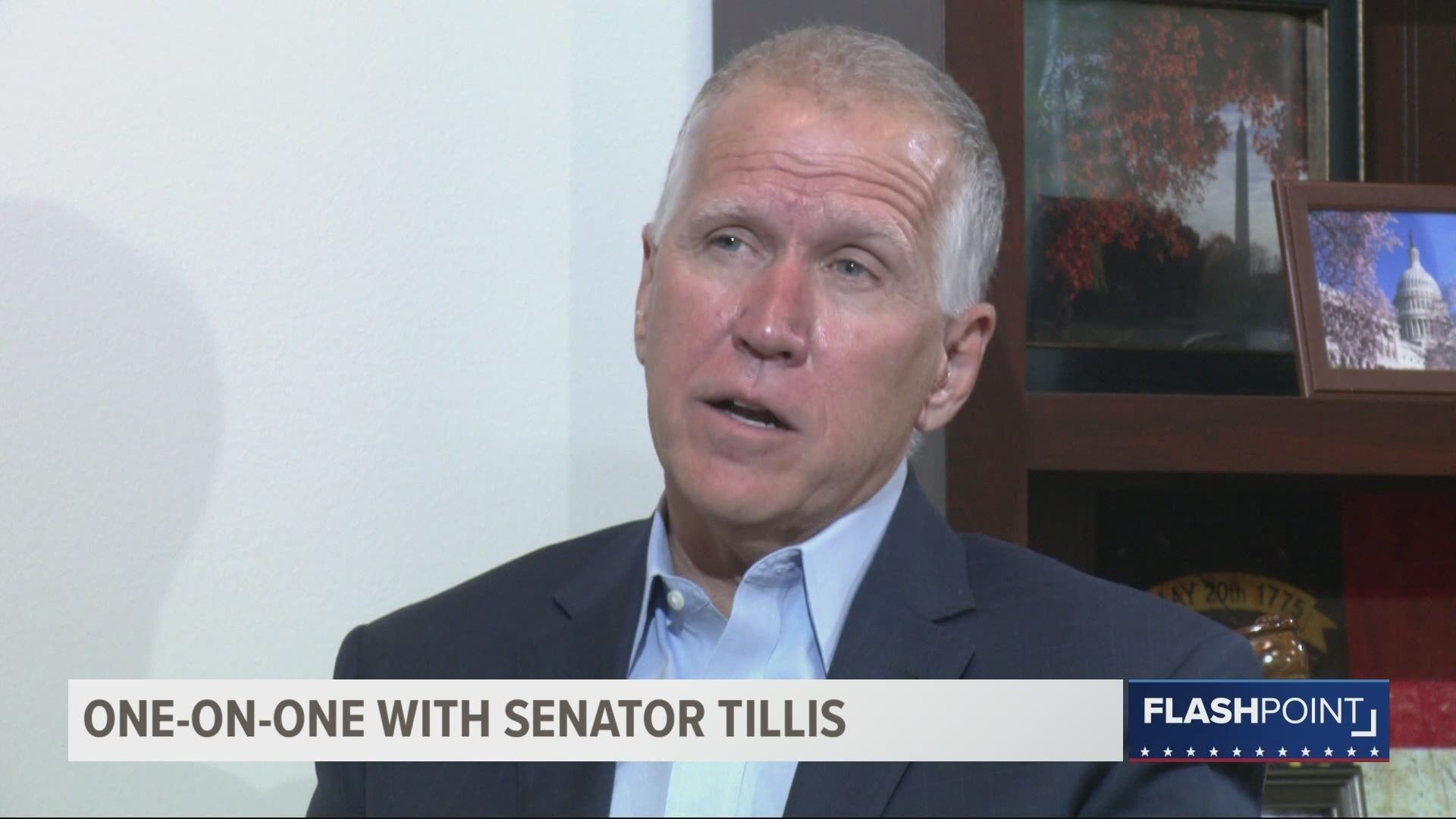 For Pete, cryotherapy and hormone therapy kept cancer at bay.  For 11 years, he was able to enjoy life; his family, his dogs, his Sunset Beach, NC home, and his beloved University of Tennessee Vols.

"Eventually it did metastasize to his bones, which at that point is stage 4 cancer," Noreen said.

Like many family members of cancer patients, Mrs. Thompson said it's easy to second-guess treatment choices, even though they followed the doctor's guidance and went to regular check-ups and bone scans.  In 2019, they turned to chemotherapy, until it stopped working as well.  Pete Thompson died in October 2020, at the age of 77.

It was the same month Tillis first got his diagnosis.  At the height of a highly competitive Senate campaign, a routine physical revealed bloodwork with elevated levels of his "prostate-specific antigen" or PSA.  The numbers set off alarms in Tillis' head as he has a family history of prostate cancer.  A biopsy confirmed it was cancer.

Tillis wants to stop the stigma associated with prostate cancer, the treatments, and the side effects.

"Since then, it just seemed silly to me to be embarrassed about getting any type of disease. It's like getting embarrassed for getting the flu," Tillis said.

Tillis has slowly added moderate exercise back into his routine. Last week, he took a 6-mile hike but said he's likely a couple of months away from being able to ride his mountain bike.

Still, he knows his fight with cancer might not be over, despite his more aggressive approach.

"There's no guarantee there aren't prostate cancer cells somewhere else in my body. But since we've reduced the chance of it spreading, it's just a matter of managing it," Tillis said.

The senator is now setting big goals for his summer.

"I want to be jumping out of a plane on my 61st birthday, and that's not until August."