Charlotte-area nursing homes flagged for past abuse and neglect

The federal government is now using a new alert system to warn people about nursing homes with histories of past abuse and neglect. 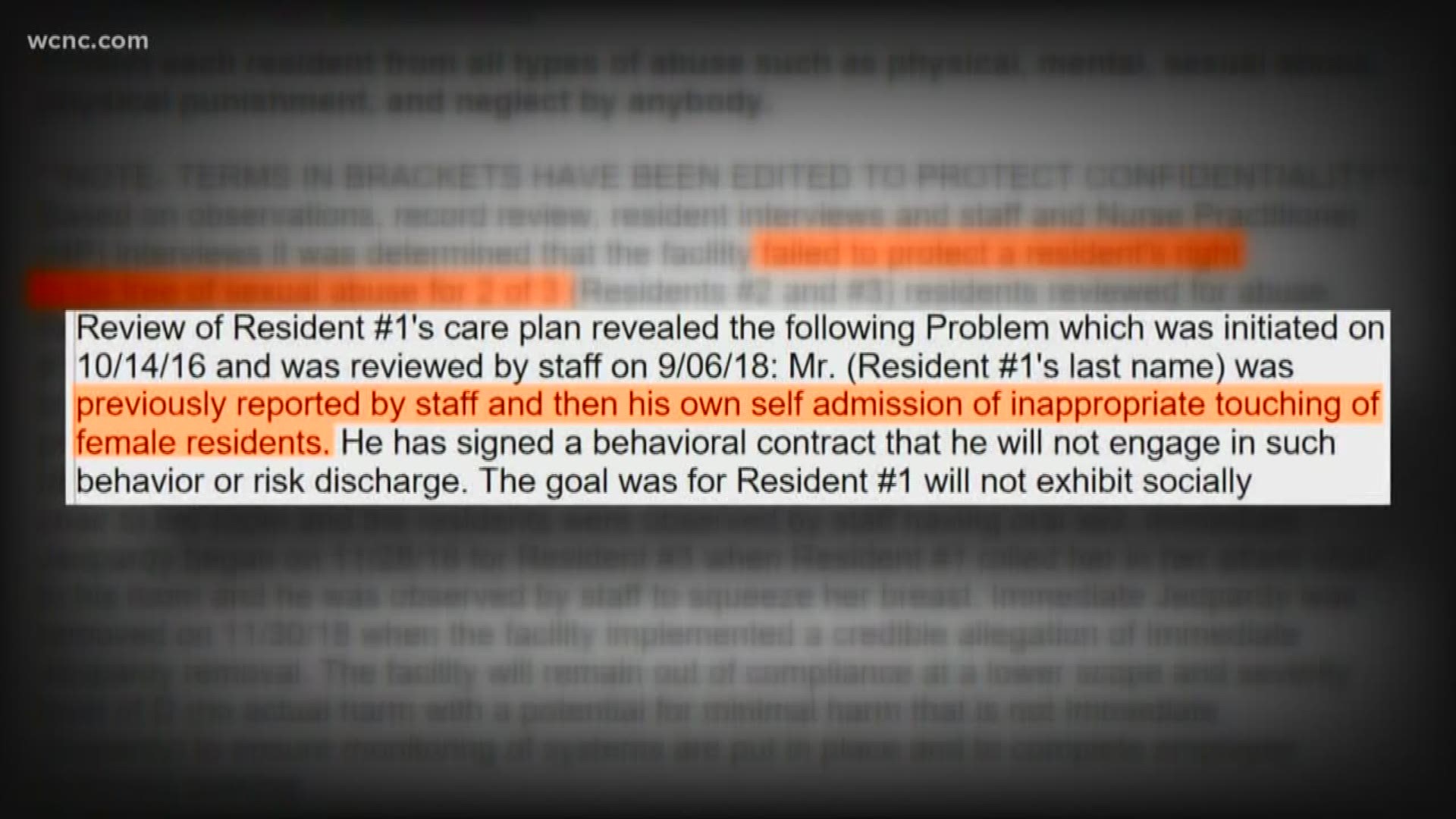 CHARLOTTE, N.C. — The Centers for Medicare and Medicaid Services has flagged more than 50 nursing homes in the Carolinas, including several in the Charlotte-area, in recent months for past abuse and neglect. The allegations range from sexual abuse to a maggot infestation inside a resident's wound, according to federal inspection records.

From now on, when you use the Centers for Medicare and Medicaid Services' online Nursing Home Compare tool, you'll find a new icon next to nursing homes with a history of abuse or neglect. The warning, a red circle with a hand inside, is part of an effort by the federal government to better alert the public before a loved one is placed in a nursing home.

The rolling alerts, which went into last year, are for facilities cited on inspection reports for one or both of the following:

Up until recently, Carolina Care Health and Rehabilitation in Cherryville held the distinction, according to Nursing Home Compare. Federal records show the federal government cited the nursing home in late 2018 for failing to protect two women from sexual abuse, finding Carolina Care knew the resident responsible had a history of inappropriate touching.

More than a year prior, Heman Devine, considered a fall risk, fell multiple times in just a matter of weeks at the facility, according to a lawsuit filed by Devine's family. Devine died in January 2017.

"There was a change in ownership in January 2017 and it was shortly after that change that he began to experience these recurrent falls," the Devine family's attorney Caleb Connor said. "We contend it's neglect. As a consequence, this man lost his life."

Federal records show that same month nurse and nursing assistant staffing numbers dropped as facility records show the patient population only decreased slightly. The nursing home disputes those figures, saying staffing hours actually rose over that period for CNAs and RNs, but the nursing home "failed to report everything accurately."

In the nursing home's response to the lawsuit, Carolina Care denied the neglect allegation.

"Absolute neglect," Connor said. "She suffered six falls in a very short time period. Had injuries, bruises to her face."

"Suffice to say, we take all allegations of poor care extremely seriously," Christopher Sprenger said. " We have a team of devoted and dedicated individuals that have spent many years caring for others. For countless team members, it is their life's passion. Although we are not perfect, we take every measure to ensure the safety and quality of care of our residents."

As for the pending lawsuits, he said there is due-process.

“There is the presumption of innocence until that is proven otherwise,” he said.

Inspection records from the Centers for Medicare and Medicaid Services also showed the following violations across the greater Charlotte area.

It is recommended that people review the alerts regularly. Since we started investigating in December, Centers for Medicare and Medicaid Services has added new alerts and removed others.