Thousands of iPads were purchased by the state for NC schools. Months later, many remain in storage.

The NBC Charlotte Defenders team is investigating the state superintendent's decision to buy thousands of iPads for North Carolina Schools. 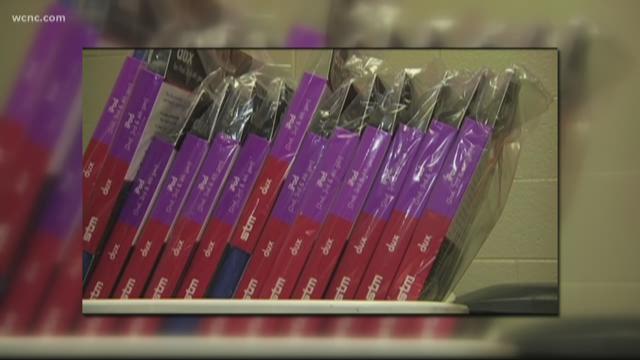 CHARLOTTE, N.C. — The NBC Charlotte Defenders team is investigating the state superintendent's decision to buy thousands of iPads for North Carolina Schools, including questions about why Superintendent Mark Johnson acted without informing the State Board of Education.

According to public meeting minutes, the purchase was discussed in September of last year. As of March of this year, more than 2,000 iPads were sitting in storage, according to documents.

NBC Charlotte reached the chairman of the state board of education, Eric Davis, by phone late Tuesday afternoon. Davis told NBC Charlotte he does not know why the iPads have remained in the warehouse.

He says Superintendent Johnson told the board the iPads would be out of the warehouse by the start of this school year.

In August 2018, Superintendent Johnson had a celebratory tone when announcing the purchase of the iPads.

“We have about 5,000 boxes of Apple iPads that will be shipped out all across the state,” Johnson previously said.

However, then came questions about Johnson’s decision to buy the devices.

According to public documents from September 2018,  Davis asked Johnson why Johnson never informed the board about the purchase beforehand.

“I think it would be helpful if the board was informed when a purchase this large was made,” said Justin Parmenter, a concerned taxpayer and a 7th grade Language Arts teacher at Charlotte Mecklenburg Schools.

Parmenter says he wants to know what Superintendent Johnson is doing with the iPads now.

According to public documents from February 2019, Johnson said some district’s preferred to use Google Chromebooks. That’s why Parmenter says the decision should have been made at the local level.

“Their (school districts') capabilities and the things they need are so different from county to county," Parmenter told NBC Charlotte. "I think it would make a lot more sense if those decisions were made at the district level."

The iPads were supposed to be distributed this spring or summer, according to public documents in March of 2019. At the time, Superintendent Johnson said there were over 2,000 iPads left to be distributed.

However, Davis told NBC Charlotte there are more than 3,000 iPads remaining in the warehouse.

“What I would like to see happen is for those iPads to be in classrooms, to be distributed to schools throughout North Carolina, for children to be able to use them, and going forward to for decisions like this to be left up to school districts to make on their own,” Parmenter said.

"As has been the plan, the 2,400 iPads will go out to districts for this school year. Extensive, strategic work has been conducted by DPI over the summer to deliver more funds and supports to schools – and over 800 additional iPads were purchased a month ago as part of that overall plan. The plan will be announced next week."

NBC Charlotte also reached out to a CMS spokesperson to see if the district received the new iPads, and if so, how many. The spokesperson said they are looking into it and would get back on that.