A Defenders investigation finds restraining children in class is legal in the Carolinas, but when misused, it can seriously injure, traumatize and kill children. 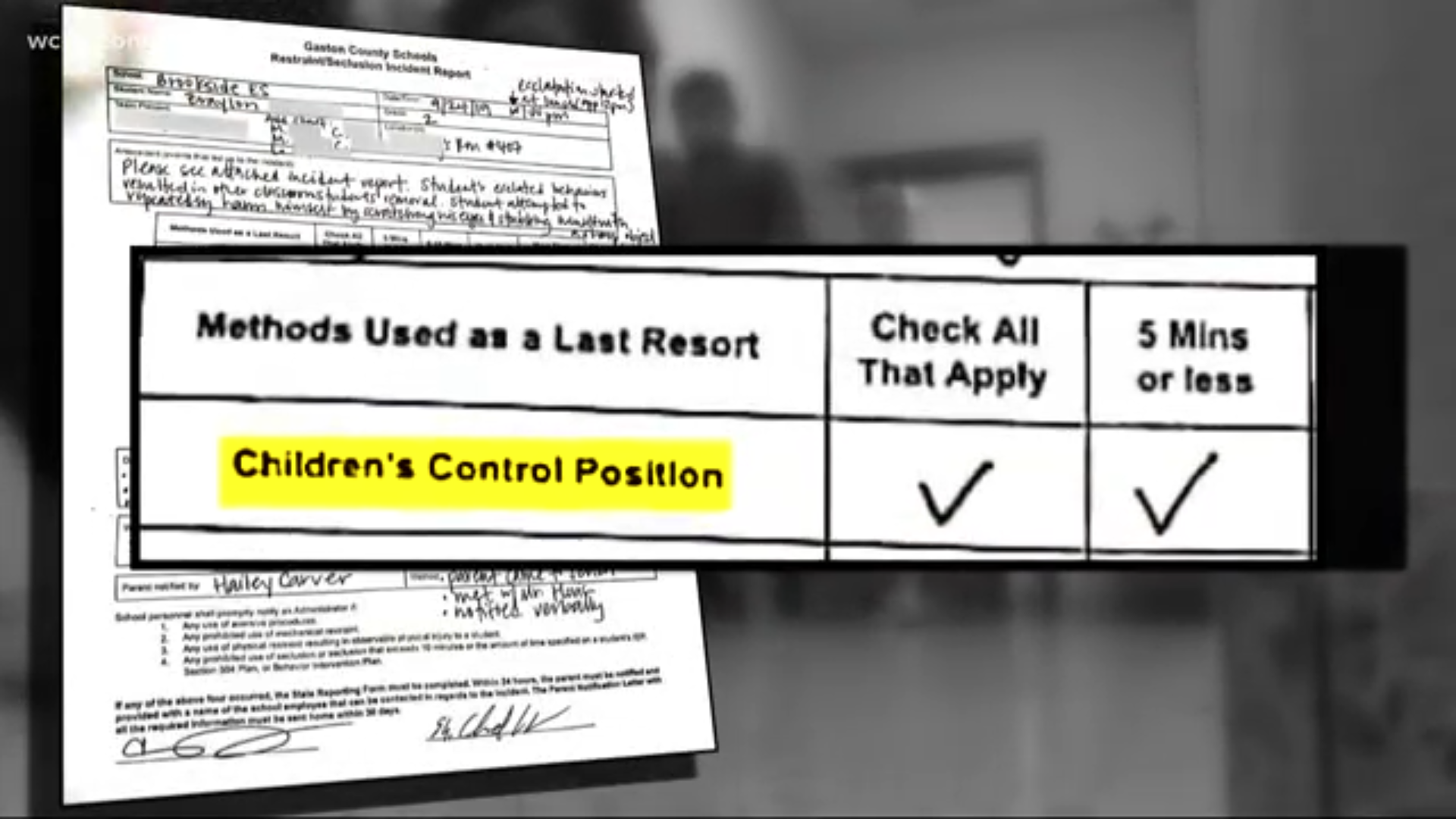 GASTONIA, N.C. — In classrooms across the Charlotte region, educators inspire creativity, encourage children to be their best, and -- in some cases -- physically restrain their students.

It's a practice that's legal in the Carolinas, and when misused, it can seriously injure, traumatize and even kill children.

Educators are only supposed to physically restrain a child if he or she is a danger to themselves or others at school.

But a four-month Defenders investigation found the practice is common, and experts contend it needs to change.

Braylon goes to Brookside Elementary in Gastonia, and he has autism. One day last September, Braylon had a meltdown.

According to records of the incident, a school administrator claimed he was a threat to himself and others. She physically restrained him using the Children's Control Position, which is taught by the Crisis Prevention Institute, or CPI.

CPI says physical restraints should only be used as a last resort.

"I understand if she had to restrain him," Carver said. "But the way she restrained him was completely inappropriate."

The school called Carver after the incident, and she drove back to the school to see her son.

According to Gaston County Schools, the administrator who restrained Braylon was suspended with pay for a week. A district spokesman said the district is not allowed to disclose the reason for the suspension.

Keith Howard is an education attorney based in Cornelius and represents families whose children suffered serious injuries while being restrained at school.

"It seems like there's an epidemic when it comes to unlawfully restraining kids," Howard said.

Training in non-violent crisis intervention is supposed to prevent educators from restraining children in the first place. But the North Carolina Department of Instruction doesn't require any physical restraint training.

Carrie Minnich runs Gaston County Schools' Department for Exceptional Children, and she argues the county goes above and beyond state requirements.

"Gaston County Schools feels very good about the program we have in place to provide the training for our teachers," Minnich said.

At the beginning of every school year, the county is required to give a general overview of the Deborah Greenblatt Act, which is the North Carolina state law outlining when it's appropriate to restrain a child.

The county said certified trainers follow up with schools and encourage them to consistently practice these techniques, but follow-up sessions aren't required.

In its "Restraint and Seclusion Resource Document," the U.S. Department of Education said training should be conducted "regularly and frequently," like a fire drill, and districts should conduct training at least twice every school year.

County records show the administrator who restrained Braylon only received 8-10 hours of documented training nearly a year before the incident.

"I just wanted justice for him because he's terrified. He's terrified to go back to school," Carver said. "It was almost traumatizing for him."

Carvers fears her son suffered serious mental trauma, and she says he still gets anxious whenever he sees that educator.

If a district isn't listed below, parents can look up their district's restraint data on the U.S. Department of Education's Civil Rights Data Collection website.