97 people arrested in four days as protests in Charlotte continue

Protesters peacefully marched in the Freedom Park area earlier in the evening before eventually heading to uptown Charlotte. 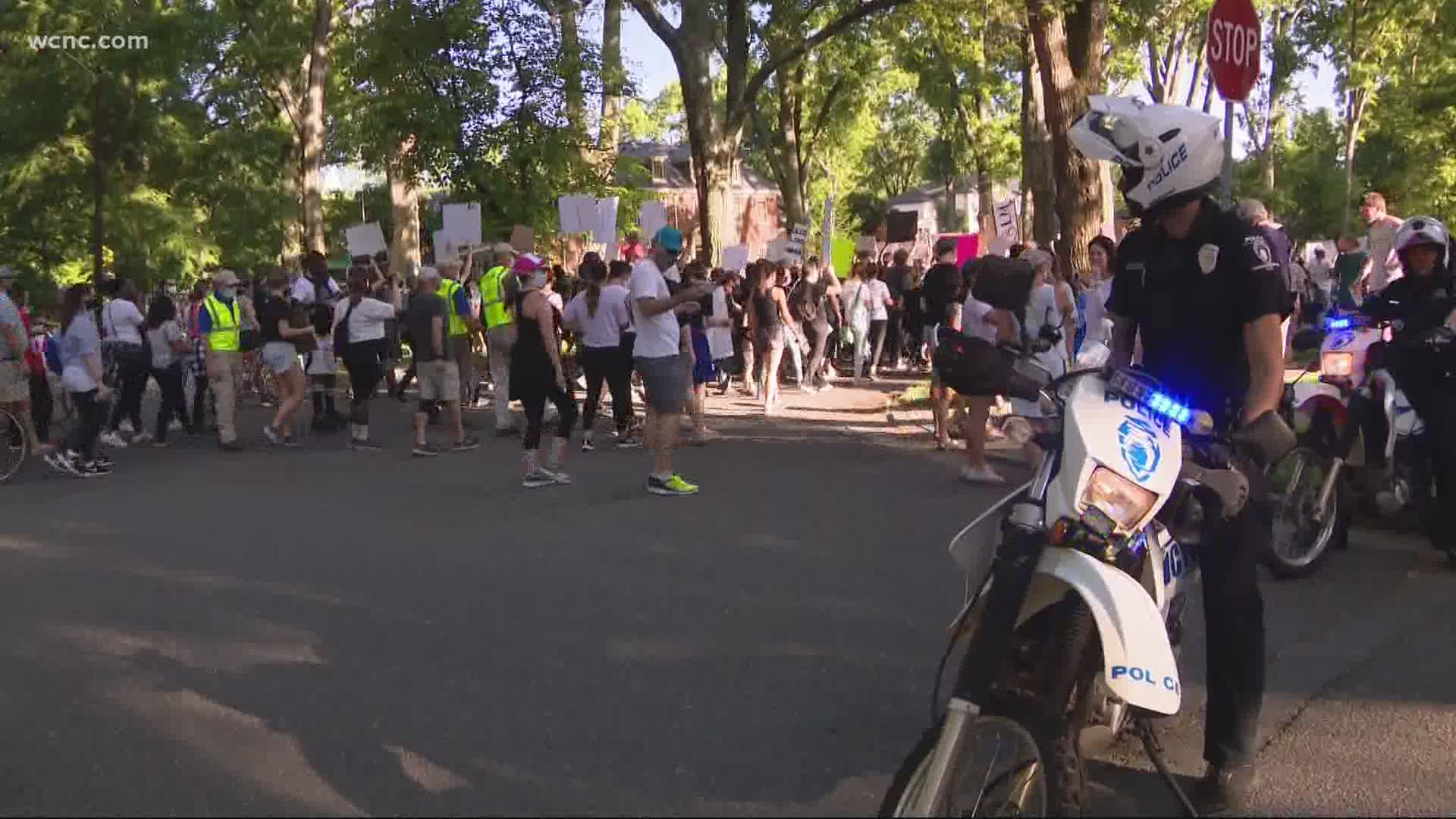 CHARLOTTE, N.C. — Monday night, protesters in Charlotte gathered to demonstrate against the death of George Floyd in Minneapolis, one week since his death. It marks the fourth straight day of protests in Charlotte.

25 people were arrested Sunday after hours of peaceful protests gave way to violent protests late night, according to the Charlotte-Mecklenburg Police Department.

On Monday night, 27 people were arrested during protests in Charlotte. According to CMPD,  weapons were brought to the protests by rioters and were used in "a complete disregard for the safety and welfare of the community." Police said machetes, bats, explosives and firearms were used to threaten the safety of officers and the community.

Police report the 27 people who were arrested are accused of damaging windows of several businesses, defacing property with graffiti and threatening the safety of the officers.

"The escalation in violence taken by the rioters necessitated dispersal orders and the use of Riot Control Agents (RCA) to protect the public, reduce the harm to officers and preserve property," CMPD said.

Over the last four days, 97 people have been arrested, and more than 70 of those arrested are from the Charlotte area.

What follows is a timeline of events Monday night, updated live:

CMPD says protesters still in the area started throwing fireworks toward the officers, and officers used tear gas in response.

As of 12:30 a.m. Tuesday, there has only been one arrest announced in connection to Monday protests.

Police officers begin clearing the scene as protesters have largely cleared the area.

While the last hour of protests showed some escalation, the vast majority of the day was made up of peaceful protests. CMPD says someone in the crowd through fireworks at one point during protests, as well as some bottles being thrown.

At one point, WCNC Charlotte's Brandon Goldner saw a resident of a nearby apartment building throwing water bottles down toward protesters.

Officers deployed flashbangs and tear gas in uptown Charlotte in response to protesters' activity after a dispersal order was made.

WCNC Charlotte's Hunter Sáenz said other protesters in the area were calling for people to maintain the protests.

As of 11 p.m., CMPD has not reported any damages to property. One person has been arrested, but CMPD have not released what the cause of the arrest was at this time. 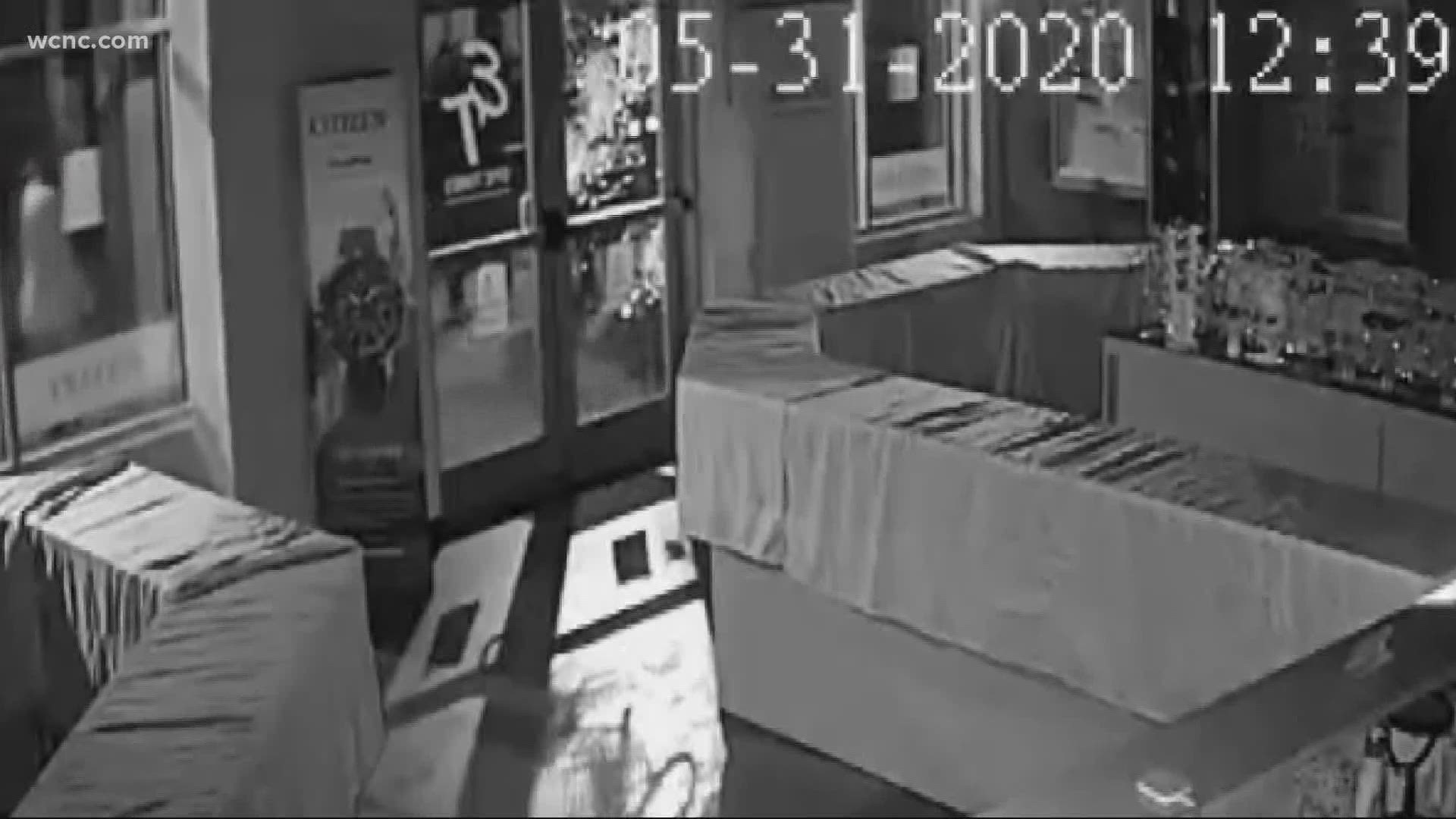 Protesters stop at the intersection of South Church and West Trade Street and kneel near the line of police. At first, you can hear individual protesters shouting who they kneel for, "for my nephew, for my future kids, they will not be scared."

CMPD officers can be seen riding patrol bikes along with protesters as the protesters continue moving through Charlotte streets.

Protesters walking around uptown have remained peaceful, chanting "Hands Up, Don't Shoot" and other phrases as they move through South Tryon.

WCNC Charlotte's Hunter Sáenz is in uptown Charlotte, where a crowd is gathering outside of the CMPD headquarters.

Protesters can be heard chanting "No Justice, No Peace."

Meanwhile, CMPD officers are on bikes, setting up a line as they have in previous nights.

The protest remained peaceful for its duration, and it's not currently believed that any arrests were made during the protest.

The group of protesters has made their way toward Queens Road West near Freedom Park, around where the protest started, after marching through the area.

Protesters chant "I can't breathe" and "No Justice, No Peace."

At one point, protesters stopped, kneeled and chanted "I can't breathe" with fists in the air.

Video sparks concerns about police use of force during Seattle protest

VERIFY: Fact-checking photos and claims from the Minneapolis protests