The event page stated guests would "hear stories from the massa himself who is now living in the woods." 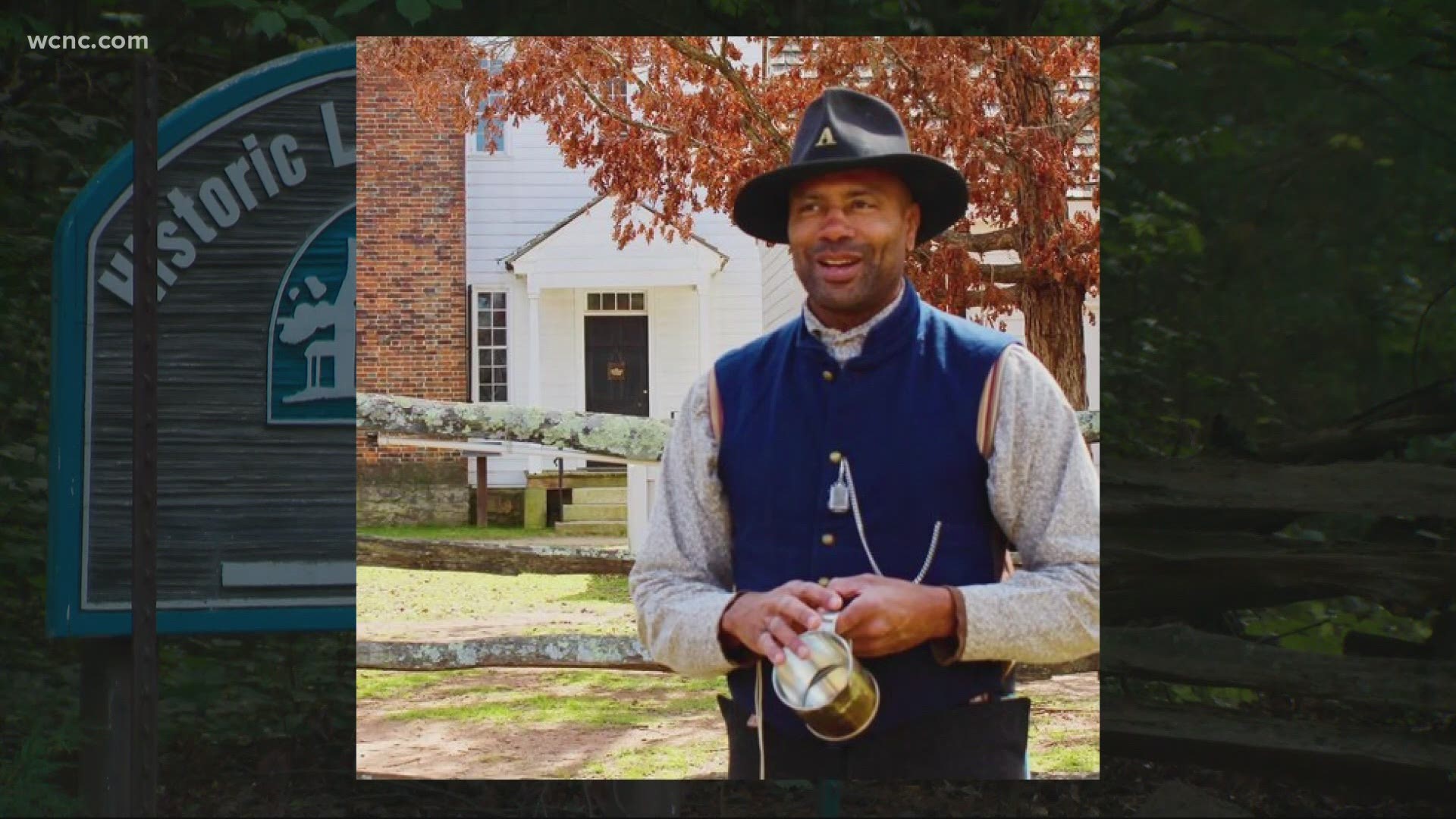 HUNTERSVILLE, N.C. — The event planned for June 19 at the Latta Plantation in Huntersville, North Carolina, has been canceled following social media backlash.

According to the event page, which has since been deleted, organizers were planning to host an event on June 19 called "Kingdom Come." The event page stated guests would "hear stories from the massa himself who is now living in the woods."

"It hurt. We understand the history what Juneteenth is something that we now celebrate but it’s rooted in pain," concerned resident Hannah Hasan said.

The event page went on to read that during the re-enactment, Confederate soldiers would "express their feeling about the downfall of the Confederacy."

The outcry on social media appeared to come from people from various backgrounds, but all with a similar interpretation of the event.

“A terrible example of white supremacy," Monica Raab said. "I was lost for words that someone would think this is a good idea.”

Others argued it was a poor rewrite of history.

"Referred to individuals who owned humans as displaced folks -- it was unbelievable," Hasan said.

Mecklenburg County issued a statement on Twitter Friday regarding the alleged event. It read in part that the county did not know about the event before they saw it on social media and said it has "zero tolerance for programs that do not embrace equity and diversity."

"Mecklenburg County has zero tolerance for programs that do not embrace equity and diversity.

Park and Recreation was not aware of the planned event Latta Nature Preserve until it appeared on social media. We immediately reached out to the organizers and the event was canceled.

As a result of this incident, Mecklenburg County is looking at its contract with the facility vendor regarding future programming."

Charlotte Mayor Vi Lyles also posted to Twitter about the situation, saying in part, "Despite intent, words matter. And the Historic Latta Plantation should know better."

We should not support any business or organization that does not respect equality, history, and the truth of the African-American people’s journey to freedom. Despite intent, words matter. And the Historic Latta Plantation should know better.

Many times I have stopped at Tuskegee University in Tuskegee Alabama to visit the Lifting the Veil of Ignorance Monument. It is a tribute to Booker T. Washington who founded Tuskegee University. The inscription I love the most is "he lifted the  veil of ignorance from his people and pointed the way to progress through education  and industry." The statue portrays Booker T. Washington lifting a veil of ignorance from a frightened slave, who is crouched on a plow and anvil depicting tools of agriculture and holding a book, which represents education. Washington sought to bring a better life to his people through education. As Chief Plenty Coups said,  “education is your most powerful weapon. With education, you are the white man’s  equal; without education, you are his victim, and so shall remain all your lives.”

I, Ian Campbell, as an American man of African descent and the new site manager at Historic Latta Plantation, will lift the veil of ignorance. Under my leadership, the Latta staff will assist in this educational endeavor. With the little information that we have about Latta Plantation, also known as Riverside, the stories of those enslaved as well as freedmen will be told. This new narrative will also include the stories of other enslaved men, women, and children on many other plantations in the United States. It will also include the stories of those enslaved and free before, during, and after the American Revolution, the War of 1812, the Mexican  American War, the American Civil War, and Reconstruction.

For decades Historic Latta Plantation has been focused on two time periods in  American history, the American Revolution and the Civil War. That is changing,  Latta will now focus on the period of reconstruction as well. Most people have forgotten about this period in our American history. Most educators as well as most of the general public skip this section and move on to the 1900s or the civil rights movement. Many of the racial issues that we face today are linked to slavery and reconstruction. Just recently, for the first time in their lives, many people just acquired knowledge of the Tulsa Race Massacre. History is not just about one time period or one group of people. The program “Kingdom Coming” was created by myself, with the help of others. I, Ian Campbell, Site Manager of Historic Latta  Plantation take full responsibility for its content entirely! To the masses on social media and politicians, no apology will be given for bringing a unique program to educate the public about former slaves becoming FREE!

Swing Low Sweet Chariot was used to represent freedom on earth from plantation owners. “What profit has a man from all his labor in which he toils under the sun?”  Ecclesiastes 1:3. The profits of these freedmen would go into their pockets and not the pockets of their owners. To tell the story of these freedmen would be pointless if the stories of others were not included. Many of you may not like this but, their lives were intertwined, the stories of massa, the Confederate soldiers, the overseer, the displaced white families. How would we know how the enslaved became free or what their lives were like before freedom came? It didn’t happen with the stroke of a  pen. Federal troops came across many of these plantations to enforce federal laws and many of the owners fled. What they couldn’t take with them they left behind, this included many of their enslaved property. Considered offensive for today, the song  Kingdom Coming, The Year of Jubilo highlights the perceived enslaved viewpoint.  The core point of this program was overlooked by scores of people.

Those formerly enslaved are now freedmen and have taken over the massa’s house, the house they toiled in seven days a week or in many cases on other plantations even built. They are now living high on the hog, bottom rail on top massa.  They now control their own destiny, they have the right to decide on what they want to do with their lives, not the plantation owner! This is what made the white supremacist of the period mad, a former slave on equal footing with whites. The right to get legally married, the right to sign a labor contract on their terms and conditions, the right to an education, also having children without fear of them being sold down the river.

The Bureau of Refugees, Freedmen, and Abandoned Lands, simply known as the  Freedmen’s Bureau, enforced many of these laws to the dismay of the white population. All this was part of what was called reconstruction. History is not always pretty, Juneteenth was chosen because it means freedom to many and it was a time to celebrate and be joyful. With current events that are ongoing, America is still in reconstruction. We have to know where we come from to understand where we are going. It was painful, it still is painful, we have to honor our ancestors for the sake of those that will be conceived.

However, freedom didn’t come in 1865 when General Gordon Grainger announced General Order Number 3 in Galveston, Texas. Many enslaved people began to steal themselves away when the abhorrent practice of slavery was brought to the Americas. As Union troops occupied the south and plantations early in the war,  freedom came for many of the enslaved before Juneteenth, this included cities such as  New Orleans and plantations on both sides of the mighty Mississippi. Many people complained about Historic Latta not doing anything for Juneteenth. Then when I  create a unique event to highlight our successful struggle out of slavery, there is backlash from many who have never visited our historical site. William T. Sherman had a dislike for the media of his day.

I understand what he may have been going through. I by no means will let this deter me and the vision of lifting the veil of ignorance. The event was canceled due to security concerns for volunteers and staff. The media’s corps of yellow journalists had a perfect opportunity to educate, however, they chose to whip the public into a frenzy,  it worked. “You never let a serious crisis go to waste. And what I mean by that it's an  opportunity to do things you think you could not do before.” Rahm Emanuel. In regards  to social media, Chief Justice John Roberts said “in our age, social media can instantly  spread rumor and false information on a grand scale.”

It was not until after the social media frenzy that Latta received numerous emails and phone calls about the event. I also received a phone call from Vi Lyles, the mayor of Charlotte. As long as I have been at Historic Latta Plantation as a volunteer, then as a part-time employee, then as the education coordinator, then as the interpretive farm manager, then as site manager, I have never seen Vi Lyles, the Mayor of the great city of Charlotte visit our site or any other influential and prominent government officials.  The same applies to NPR, WBTV, the Charlotte observer et al. This applies to some of those citizens in the community that have been offended. Your opinions and concerns have been respectfully noted. However, after reading this, many of you will still be offended, some will be supportive, thank you.

In closing, my job will be to continue to educate. Historic Latta Plantation’s narrative will be to give a voice to our ancestors enslaved and as freedmen who were denied a voice. We will speak for them in a compassionate, accurate, and sensitive manner.

RELATED: Things to do, events to celebrate Juneteenth

This morning Latta Plantation removed this Juneteenth event from their online calendar and Facebook page after FB commenters let them know just how awful of an idea it was. pic.twitter.com/8pj8OyuyCr