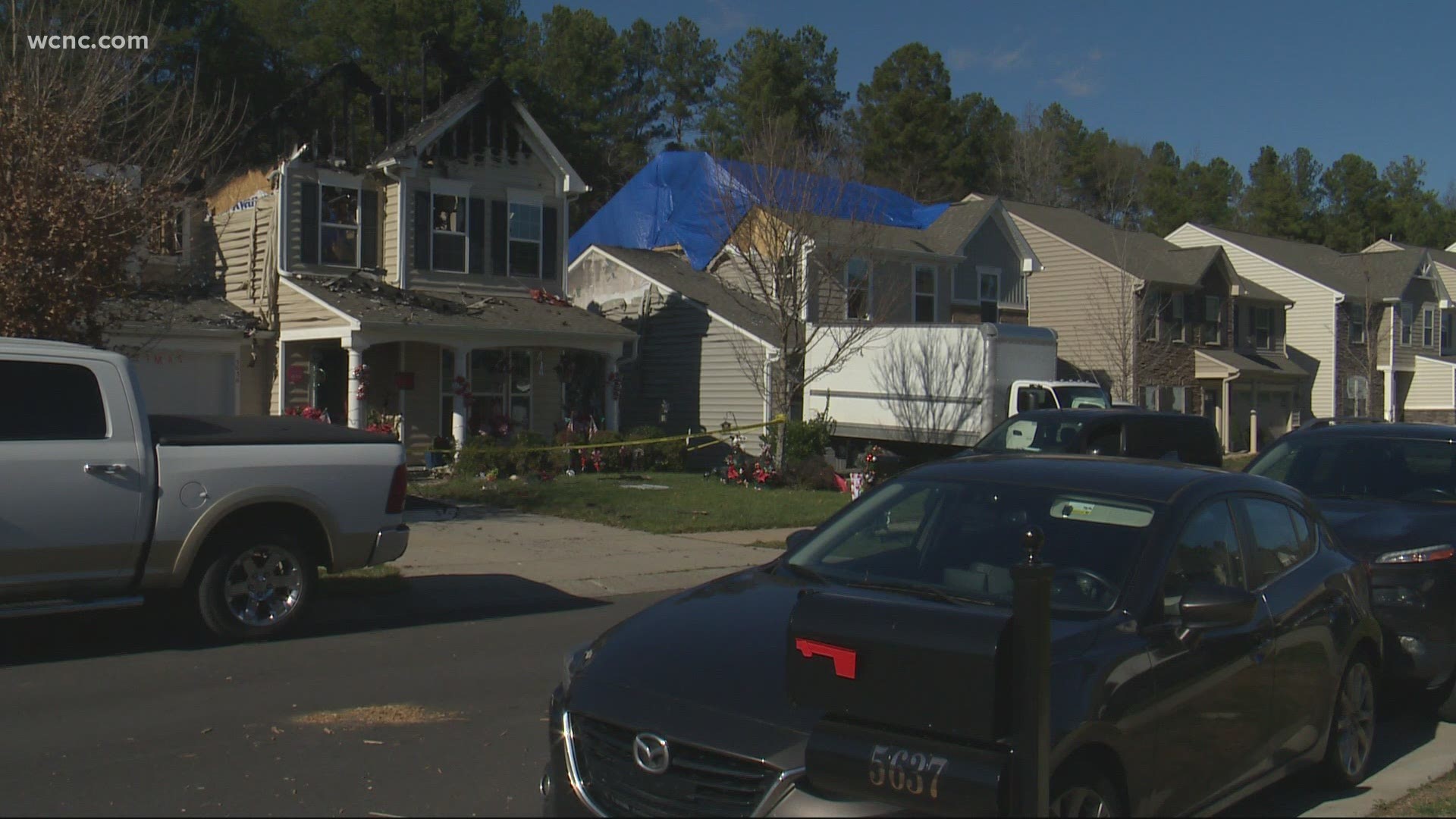 CHARLOTTE, N.C. — Multiple homes were badly damaged when a massive fire broke out in the Steele Creek area of Charlotte early Wednesday morning.

It happened around 3:30 a.m. in the Berewick neighborhood on Selkirkshire Road, which is about a mile from the Charlotte Premium Outlets. Dozens of firefighters, police officers and paramedics were called to assist with the fire.

By 5 a.m., most of the flames were extinguished but there was still heavy smoke coming from multiple houses that were on fire.

Five houses were damaged or destroyed, according to county officials. The homes in this particular neighborhood are very close together and fire could spread easily from home to home.

Mecklenburg County Chief Fire Marshal Ted Panagiotopoulos told WCNC Charlotte the cause of the fire is undetermined at this time, as no single definitive ignition source was found. All officials know is that the fire started on the patio/deck of 5636 Selkirkshire Road.

"Flames were shooting out the top of the building and spreading quickly," Neighbor Leslie Holland said.

One person was taken to Atrium Health-Pineville with minor injuries, according to Medic. Charlotte Fire Department confirmed the patient was a firefighter from the Steele Creek Fire Department.

"I'm so grateful to God because he cut the fire out it didn't spread more than it could," Neighbor, Tracy Balentine said.

The fire was so large the smoke and debris briefly appeared on radar, according to chief meteorologist Brad Panovich.

The multiply homes on fire this morning in the Selkirk neighborhood in Steele Creek showed up on radar briefly this morning. Shows how massive the fire was. #cltwx #wcnc #ncwx pic.twitter.com/2nudnxVRvH

"Around 4 a.m. we woke up, we came outside and my husband yelled up that there was a fire," said one neighbor. "So I ran down, saw the smoke billowing ... When we rounded the corner, we saw two houses engulfed in flames. We didn't know there was damage to two others, but it was just shocking."

For hours, many neighbors came by to watch and offer help after families were left without a home.

I just spoke to a man who lives in the area he said 2 of the homes on fire belong to his best friends. Their children are at his home. He says “really bad.” We’re working to confirm how the fire started but the neighbor says the families told him it started from a fire pit @wcnc https://t.co/fKtB4bj7xY

A man who lives in the area told WCNC Charlotte's Billie Jean Shaw that two of the homes that caught on fire belong to his best friends. He described the damage as "really bad" and said he was told by neighbors the fire started in a fire pit.

There are two GoFundMe pages set up for those impacted: one of the families directly, and one set up to help all the families replace lost possessions and clothing.

RELATED: Mnuchin: Stimulus payments could arrive as early as Tuesday