Arrests made after Elizabeth City protesters stay out past 8 p.m. curfew

The daily protests in Elizabeth have so far been peaceful, with many on Tuesday expressing displeasure at the curfew. One woman called it "a slap in the face." 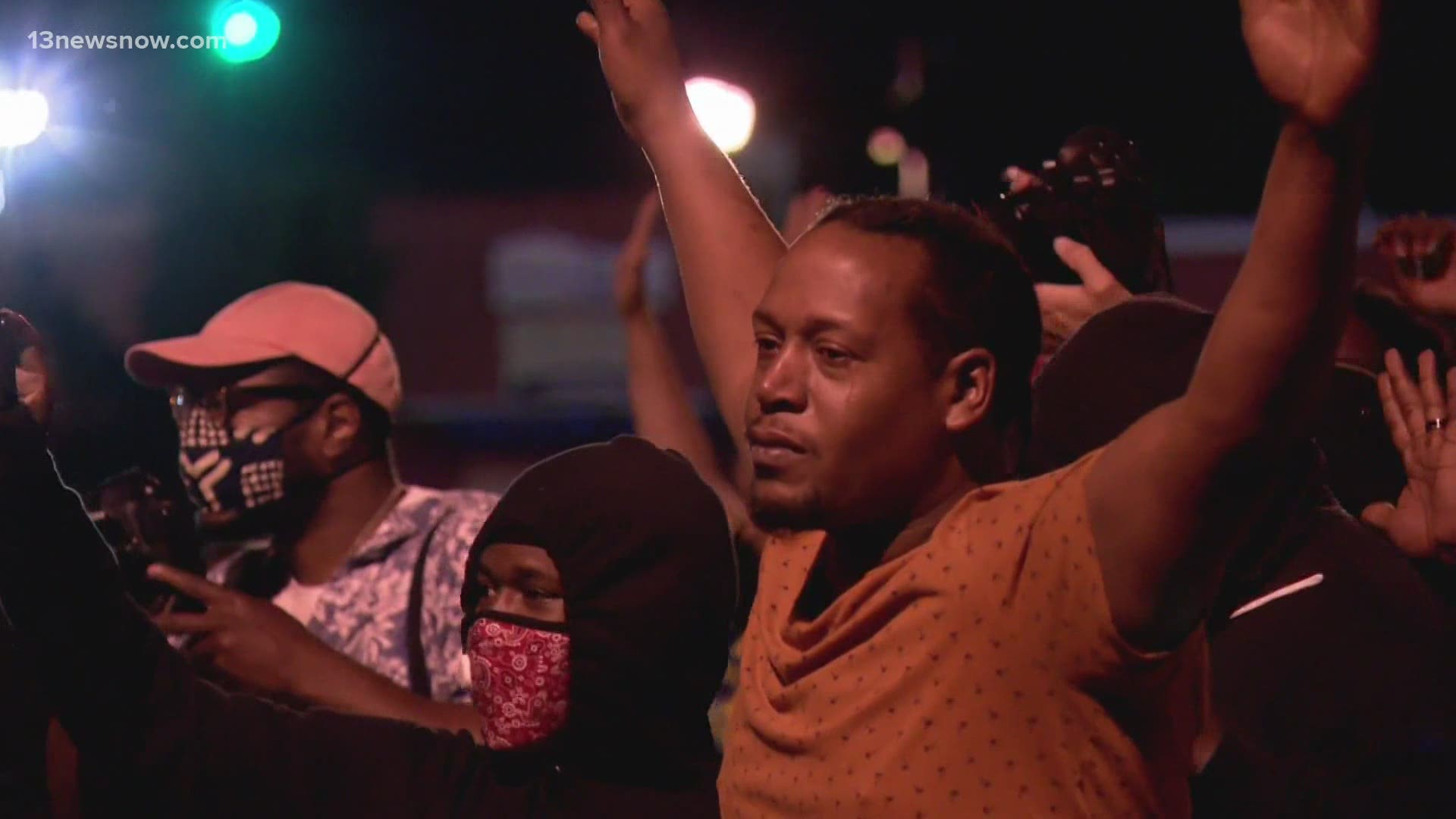 The curfew was added to the mayor's state of emergency order, in response to seven straight days of peaceful protests following the death of Andrew Brown Jr.

The community is calling for justice, accountability, and transparency in Brown's death. Pasquotank County Sheriff's deputies shot and killed Brown on April 21 while serving a warrant related to felony drug charges.

Children, youth, and adults must be off city streets during those hours. The only exceptions are for people who have to commute to travel to work or if there's an emergency.

The daily protests in Elizabeth have so far been peaceful overall, with many on Tuesday expressing displeasure at the curfew. One woman called it "a slap in the face."

“Why are we being punished with a curfew?" asked June Gibbs, who was Brown's former elementary school counselor and cousin. "I feel like a curfew is for the ones that have done wrong."

Organizer Kirk Rivers said the move places an unfair label on protesters who have shown a track record of nonviolence.

"It’s a surprise and we are going to talk to the mayor," he said.

"Our Chief of Police reported to Management that there had been some 'rock throwing' Monday night," Mayor Parker said in an email to 13News Now reporter Eugene Daniel. "So, to be proactive and not wait until there is an escalation in the actions of some 'bad actors', we decided it would be wise to enact a curfew of 8:00 pm to 6:00 am until we observe, once again, total peaceful protesting. There are some exceptions, i.e. people traveling back and forth to work."

8:45pm — and smaller group of protestors remain. Police have not moved in but a recorded message that they could be arrested for violating curfew has been on repeat for an hour.

This is Rev. Curtis Greenwood. He doesn’t plan to move. #13newsnow #AndrewBrownJr pic.twitter.com/cVF1fWm8eB

“This is not a good idea right now..." said Andre Simpson, who said he knew Brown. When he heard about the curfew, he immediately came to City Hall looking for city leaders. He predicted the move would cause unnecessary conflict in a peaceful situation.

As of 9:55 p.m., about 30 protesters remained out, while Elizabeth City Police officers in riot gear have positioned themselves nearby, calling on them to disperse. Police said in a tweet that they have given their final warning and arrests will follow if the group does not disperse.

Police began making arrests shortly before 10:30 and by 10:51, they sent out another tweet saying the "crowd has dispersed at this time" and the intersection of Elizabeth Street and Water Street has reopened.

A Wednesday evening release from the department shared that the seven people arrested ranged in age from 25 to 62 years old.

The release said these protesters were told over loudspeakers to go home several times before the arrests were made.

Protestors and Police at impasse in #ElizabethCityNC in wake of #AndrewBrownJr death.

More arrests in #ElizabethCity as police have taken over intersection of Elizabeth St. and Water St. where #AndrewBrownJr protesters previously had blocked. #13NewsNow pic.twitter.com/GbR8uVvg7q

The area in #ElizabethCity is clear. This is a shot of police leaving the area around 11pm — as protestors followed and mocked them.