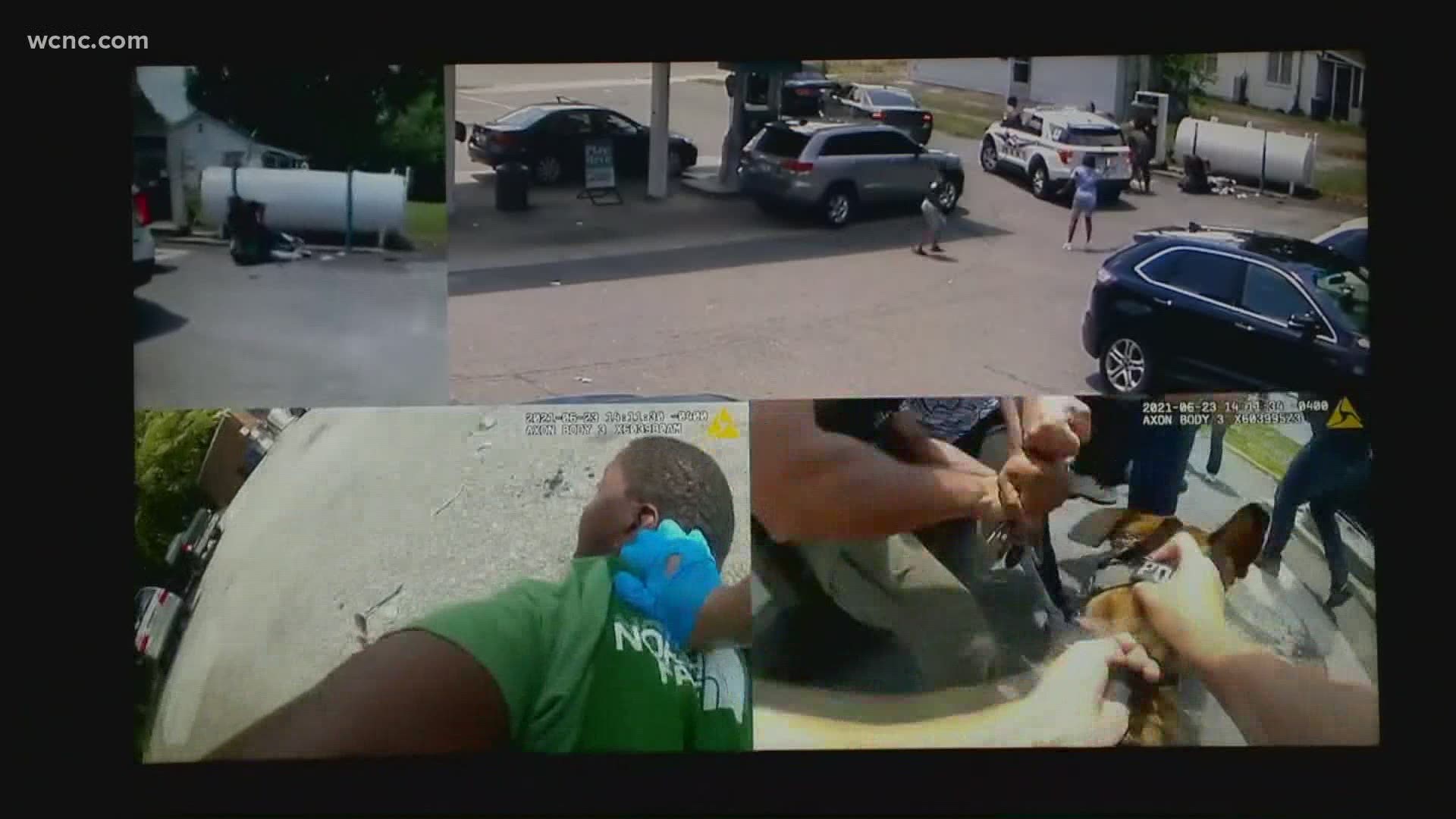 ROCK HILL, S.C. — More than two weeks after a video of a controversial arrest of two brothers in Rock Hill went viral - and prompted nightly protests - the Rock Hill Police Department announced one of the police officers involved was fired and criminally charged for his conduct.

During a lengthy news conference Thursday hosted by the York County Solicitor's Office, county and city officials showed multiple video perspectives of the June 23 encounter at a gas station that led to the arrest of Ricky and Travis Price. The presentation included the previously seen Facebook video and gas station surveillance video -- plus two police officer body camera videos not previously seen publicly.

Rock Hill Police Department Officer Jonathan Moreno has been charged with third-degree assault and battery stemming from his arrest of Travis Price, police department Chief Chriss Watts announced at the Thursday news conference. Travis Price was at a gas station after police stopped his brother, Ricky.

Travis was standing where other police officers had asked him to stand as they prepared to hand him jewelry belonging to Ricky. Seemingly unaware of the instructions given to Travis, Moreno can be seen on video confronting Travis. He pushes Travis against a fuel tank and down to the ground before placing him under arrest.

Watts said Moreno's actions were wrong and led to an escalation of the situation. Chiesa Putnam, senior solicitor for the city of Rock Hill, apologized to Travis and announced his charge of hindering police was dropped. His record has also been expunged.

In the news conference Thursday, four perspectives of the June 23 encounter are shown: the two body camera angles, the gas station surveillance video, and the Facebook video. The two body camera videos were from Moreno and police officer Matthew Palmer, who was also initially suspended.

No further actions were announced Thursday against Palmer, who is seen on video handling his K9 partner.

Moreno's camera shows him picking up the gun found in Ricky's car before running up to Travis Price. Moreno then presses Travis Price against a white fuel tank, taking him down to the ground during that arrest.

Rock Hill police's original narrative said they originally pulled Ricky Price over for an illegal turn while driving, but found a gun and drugs in his car. They claimed he tried to resist arrest and flee after officers unlocked his handcuffs in order to give his jewelry to Travis.

In their original press release last month, the Rock Hill Police Department accused Travis Price of refusing to comply with officer's demands. They claimed he made repeated, physical contact with officers

"Travis then used his body to bump the Officers backward," they wrote at the time.  "Travis shoved Officers, refusing to comply with orders to place his hands behind his back."

On Thursday, the department changed its tune regarding Travis' actions.

Brackett confirmed Travis Price had already been speaking with other officers and was complying with given instructions. It appeared Moreno was unaware of those instructions when he quickly confronted Travis.

According to the video, Travis protested Moreno's actions, claiming loudly he wasn't resisting. Moreno is heard on camera saying to Travis, "Fight. Fight. It's just me and you."

Other officers can be heard in the background trying to get Moreno's attention.

On the body cam of @rockhillpd Officer Moreno you hear Travis Price saying “I ain’t done ****” “I’m not resisting!” multiple times. You hear Moreno challenge him: “Fight. Fight. It’s just me and you.” pic.twitter.com/Xm4haWptS4

Watts took the podium Thursday to address Moreno's actions. He then announced Moreno's conduct violated department policy by escalating the situation. Based on this, Watts announced Moreno was fired.

Brackett then opened the podium to Moreno, who made a brief statement but did not answer questions. Moreno, who has worked in Rock Hill for 10 years, said what he did was fueled by emotions. He apologized for his actions and said what occurred was out of character for him. Moreno said he should be held accountable for his own actions. He was then lead away to be taken to the detention center for booking.

Wednesday night, Moreno had a bond hearing. He is scheduled to appear in criminal court on Aug. 11, according to the York County Sixteenth Judicial Circuit Public Index.

WCNC Charlotte spoke with Former FBI Agent Quention Williams who shared his take on the viral arrest of the brothers.

"It appears as though he assumed Travis was doing something untold. But he was just standing there in compliance with the officers' directions," Williams said. "Through the screens of the community, for transparency have gotten us to this result."

After the announcement by officials Thursday, Travis Price and his attorney, Justin Bamberg, spoke outside the Moss Justice Center in Rock Hill.