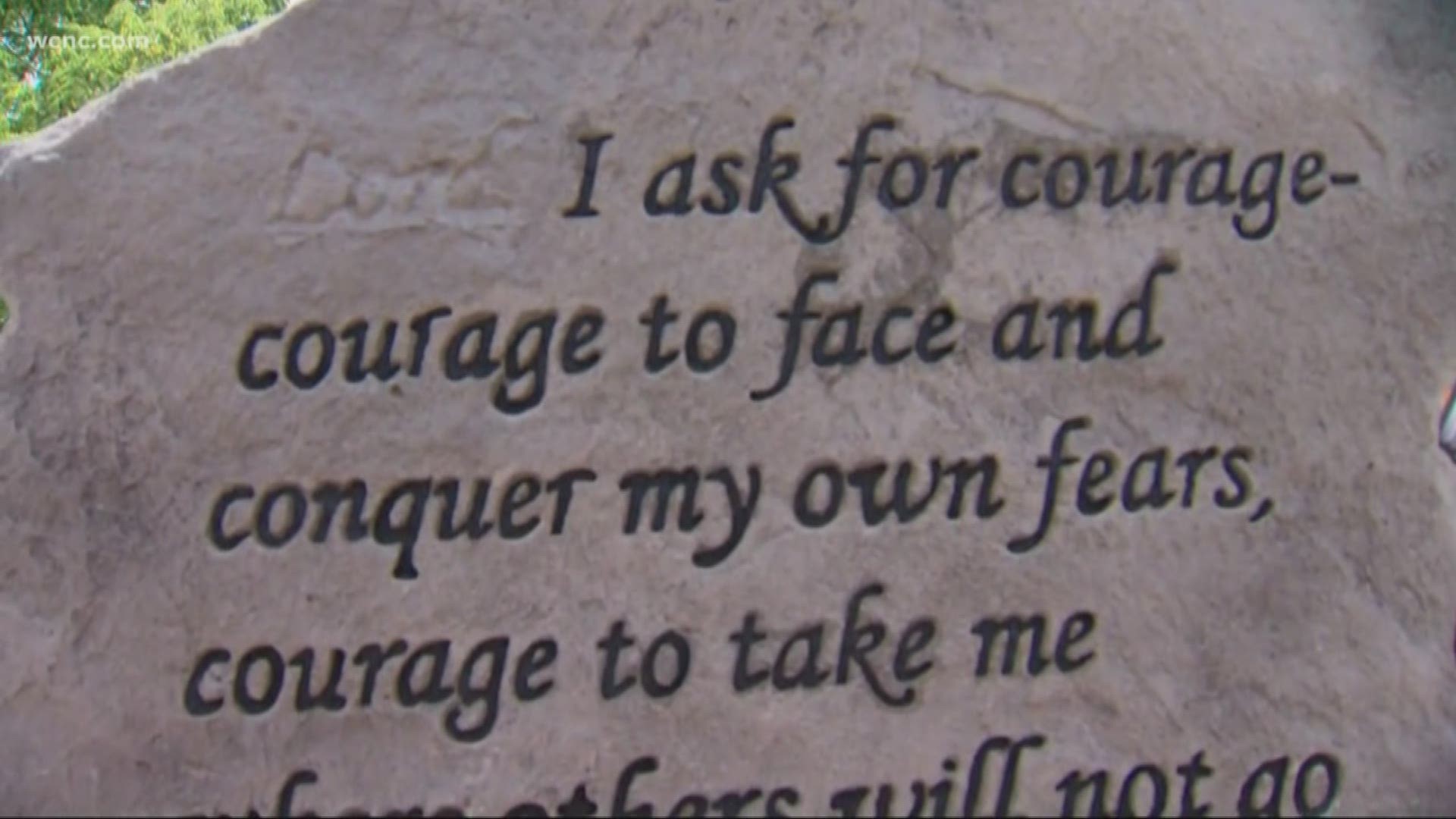 TEGA CAY, S.C. — Tega Cay announced Friday that after careful consideration and much conversation, the city council made the decision to restore a controversial fallen officer monument.

After careful consideration and much conversation with people on both sides of the discussion, City Council has made the decision that the Police Officer's Prayer will be restored to its original condition and returned to the Fallen Officers’ Memorial located at the new police station. We want to thank everyone for voicing your opinion, as it’s not always easy to do so on such a sensitive subject. As Mr. Dunn stated before Council July 15th, none of what has transpired was an attack on our Police Department or anyone’s faith. Our City Council and citizens have always been strong supporters of the men and women in blue. We’d like to thank Mr. Dunn and the others who spoke before Council. The respectful exchange of ideas and opinions is truly what makes local government extraordinary. This was a tough week in Tega Cay. It is our hope that we can now move forward together and continue to be the strong, welcoming community that we have always been known for. Regardless of our different viewpoints, our people are what truly makes this City such a wonderful place.

On Tuesday night, the city announced they decided to remove the monument altogether while they look for a solution that expresses support of "those who risk their lives every day."

Before that, the city decided to remove the word "Lord", which appeared three times on the monument, after backlash from the community. Then, social media began buzzing with others who disagreed with the city’s action.

The monument was originally placed at the fallen officers memorial outside the police department. A police spokesman said the controversy began when the department started getting complaints about the religious references, so city leaders had a meeting and decided to remove them. 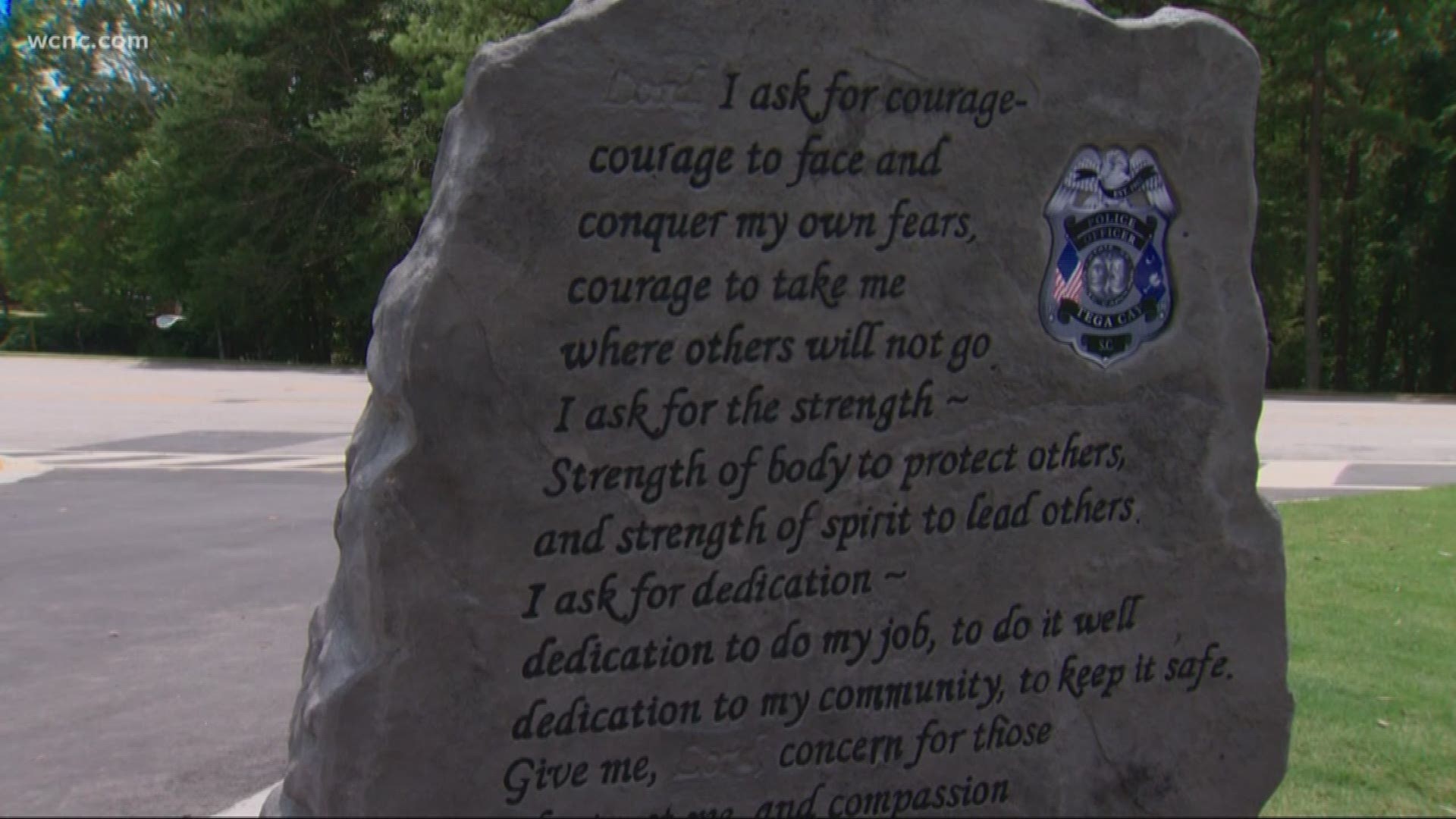 In a statement released Tuesday, city officials say they received comments both locally and nationally in response to the monument.

"We attempted to find a compromise but failed as our community has further divided. In an attempt to find a resolution, we have upset parties on both sides of this issue and, for that, we are truly sorry," the statement reads.

The Tega Cay Facebook page had dozens of comments about the monument. Some questioned the legality of having the monument on public property.

"It’s nice, but why is there a Christian bible verse and prayer on it? This violates separation of church and state," one woman posted.

Others like longtime resident, Charles Parker, had a different view.

"People on social media complain, and I’m saying, get a life," Parker said. "We were organized as a Christian nation, and I don’t see that that’s really a problem of separation of church and state."

Even Congressman Ralph Norman weighed in, posting a video on Facebook.

"You know the last time I checked, it was 'One nation under God,' to have this scratched out is sad, to say the least," Congressman Norman said in the video. "That’s why we’re fighting in Washington, D.C. to put God back in public to buildings like this to put God back in our public schools."

Tega Cay’s city manager, Charlie Funderburk, told NBC Charlotte he’s heard from people across the country about the controversy over the monument, which was donated to the police department by the Tega Cay Women’s Club.

“We upset a lot of people, we screwed up, we are owning that,” he said. “It wasn’t the intent, we weren’t trying to disparage U.S. Christian faith or anything of that nature, not even close.” 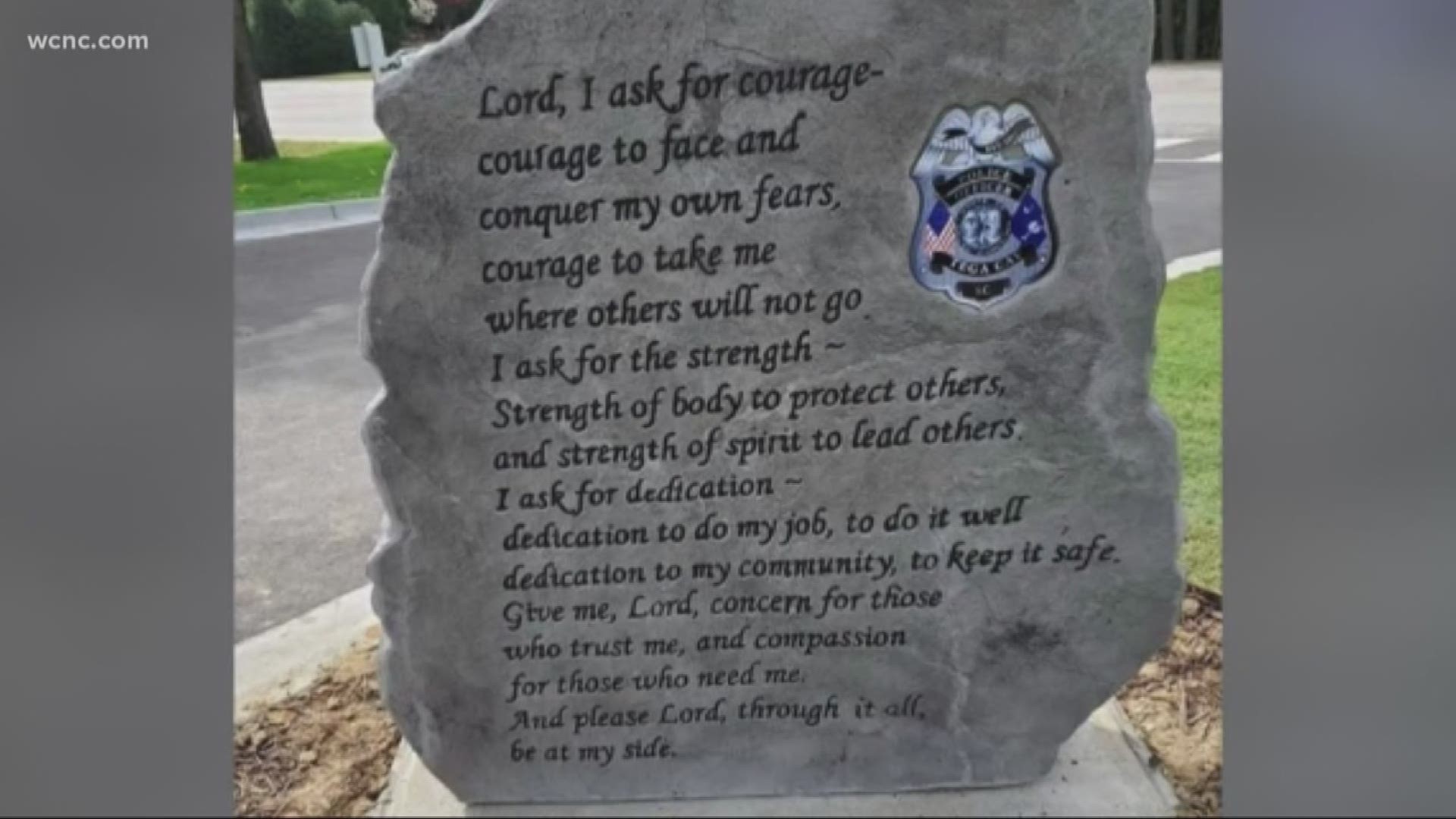 Funderburk said the monument was meant to honor law enforcement and modeled after other monuments that appear across the country at various levels of government.

However, after seeking legal advice, the city decided to remove the references. Funderburk released the following statement to NBC Charlotte:

The City of Tega Cay and our Police Department understand that not everyone agrees with the religious references that were on the monument located in the Fallen Officers Memorial at our Police Station. We also understand that just as many people are not in agreement that we have removed those references. There was never any intent to hold any group in higher regard than another. This monument was modeled after other monuments that appear across the country at various levels of government honoring law enforcement officers, military veterans and others whose duty is to protect and serve. Be that as it may, after seeking legal advice on the matter and after discussing it at length with City Council, we have made the decision to remove those references. We are public servants and want to make certain that all members of the public, regardless of what their religious beliefs may or may not be, understand that we are here to serve everyone. They will be welcomed into our facilities, whether it be the Police Station or City Hall, they will be treated fairly and with the respect they are owed by us. As the two sides of this issue continue to debate their stance we hope they will do so civilly and respectfully.

City leaders said a bible verse will be kept off the monument when it's returned.