Protests in uptown Charlotte continue ahead of RNC 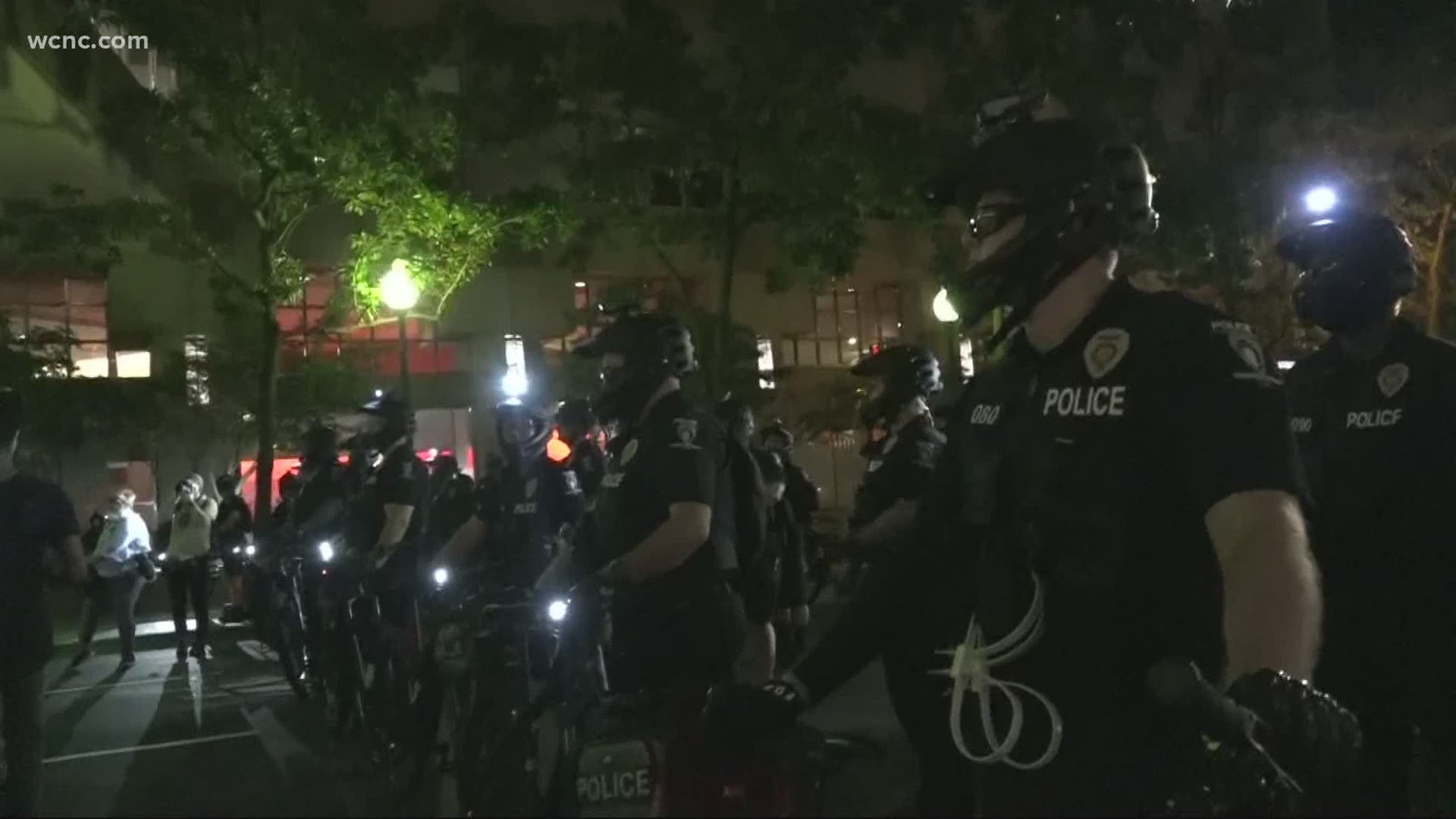 CHARLOTTE, N.C. — For a second night, protesters gathered in uptown Charlotte in response to the Republican National Convention. Charlotte Uprising posted on its Twitter Saturday evening, encouraging people to meet at Marshall Park.

As of 11:45 p.m. Saturday, police had only confirmed one arrest related to the protests.

"It is so important that we make our voices heard in opposition to the RNC," a tweet from Charlotte Uprising said.

Just before 10 p.m., the Charlotte-Mecklenburg Police Department announced pepper spray was used to "stop a protester armed with a pole" who police said was advancing on officers.

#HAPPENINGNOW: There are protests in opposition of the #RNC2020 in Uptown. @wcnc pic.twitter.com/TYszA3rg6D

Around 10 p.m., demonstrations in uptown caused traffic to be blocked on a portion of 3rd Street. As protesters chanted, CMPD stood in front of the group with bikes.

*Profanity used* Protesters are currently blocking traffic on 3rd Street in Uptown. CMPD are on their bikes. @wcnc pic.twitter.com/URMsEoBN2F

At 11:20 p.m., CMPD said officers arrested one of the demonstrators that was armed with a gun. That arrest happened on South Tryon Street. No further information about the arrest was made available.

Charlotte Uprising said on Twitter just before midnight that someone was having a seizure because of use of lights in the area of South Caldwell and Stonewall. CMPD has not commented on this report.

CMPD did confirm, however, that pepper spray had been used on several protesters over the course of the evening in response to protesters who "advanced on officers."

Additionally, CMPD said at 12:30 a.m. Sunday that more demonstrators had been arrested for "repeatedly agreeing on police line," but CMPD has not provided information on how many arrests have been made.

The group is moving on down S Caldwell St. @wcnc pic.twitter.com/ixDj31NVa3

Friday night, protesters gathered near the NASCAR Hall of Fame in uptown Charlotte, where several of them went toe-to-toe with police. The Charlotte-Mecklenburg Police Department said a group of around 60 demonstrators had gathered in uptown Friday around 9 p.m.

Delegates arrived for The Republican National Convention on Friday. Over 300 people are making their way to the Queen City for the convention. Thousands of people were originally expected, but the event was scaled back due to the COVID-19 pandemic.

President Donald Trump is expected to make an arrival in Charlotte on Monday, as the Republican National Convention gets started.