Senate candidates differ on more than policy. One would get first COVID vaccine, the other is 'hesitant.'

The NC candidates for U.S. Senate faced off for their first debate Monday. When asked if they would take a COVID-19 vaccine when available, their answers differed. 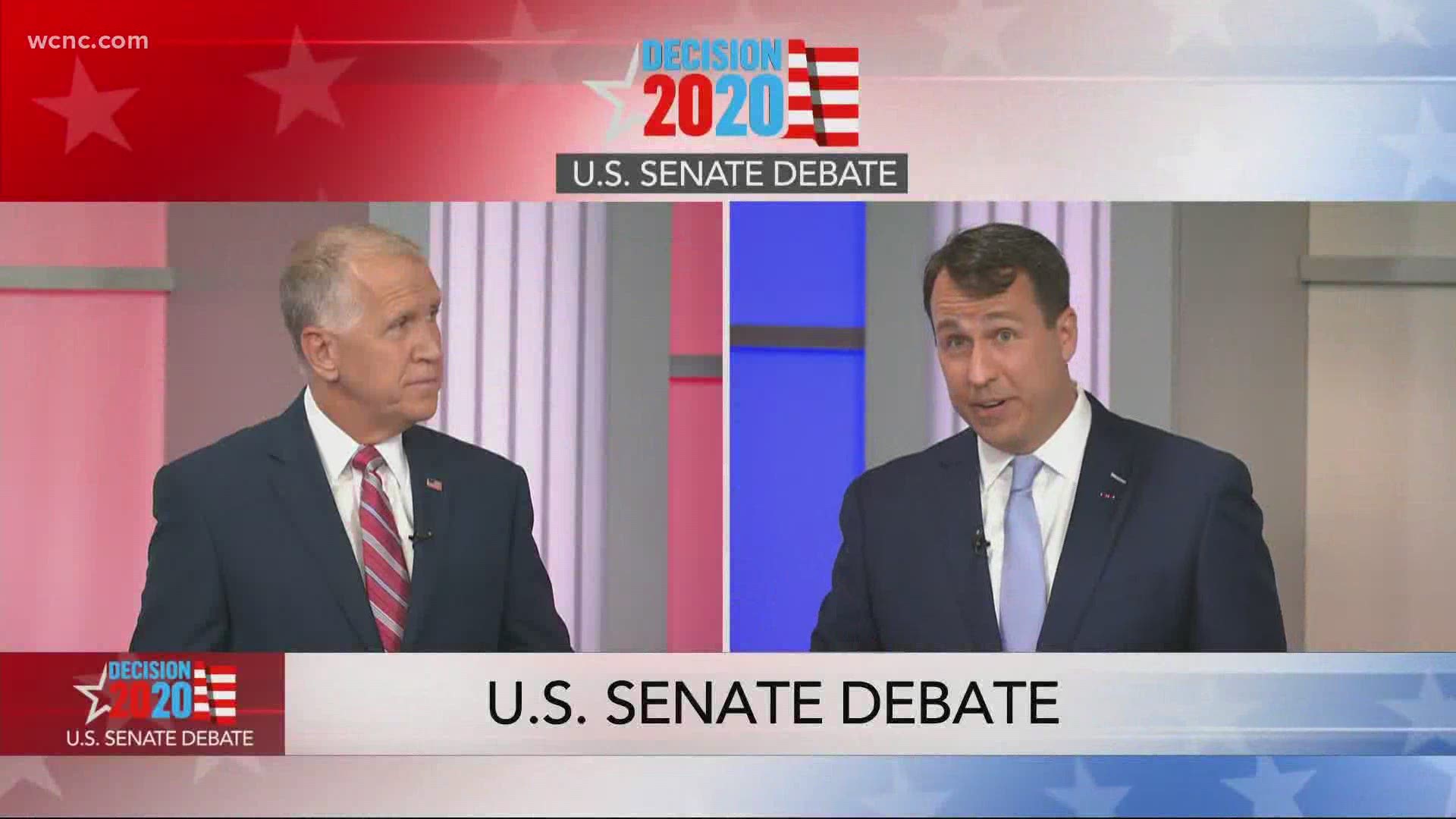 RALEIGH, N.C. — Candidates vying to represent North Carolinians in the U.S. Senate squared off for their first debate Monday night. Republican Senator Thom Tillis says he'd take a vaccine after FDA approval, but democrat challenger Cal Cunningham said he will be hesitant to take get one.

The candidates debated in Raleigh, hosted by WRAL-TV, for an hour Monday night. The political back-and-forth was heavily focused on COVID-19 and the government's response to it.

In his opening statement, Tillis didn't hold back, taking a jab at his challenger.

"Cal has said anything he could to get elected," Tillis said.

It wasn't long before Cunningham hit back.

"Seriously, this is a person who time and time again shifts his position, writes and rewrites his record," Cunningham responded.

The candidates vehemently disagreed in the grade of President Trump's response to the pandemic.

"I think that we are seeing and experiencing an unprecedented failure in leadership in this country," Cunningham said.

"In a crisis -- you don't go for perfect, you go for good steps in the right direction," Tillis said.

Both agreed that more needs to be done in order to help those who have lost jobs during the pandemic restrictions and have no money coming in. Small businesses have also needed help and talks have stalled when coming up with a second federal relief bill.

"That bill is an important bill that businesses, schools parents, healthcare workers, the postal service all want and it's a shame that you'd vote against it for other priorities that we can fight on another day," Tillis, who voted in support of the relief package, said.

"If that bill were on the floor tonight, where would your vote be?" moderator David Crabtree asked Cunningham.

"Oh, I would have voted against it," Cunningham responded. "I'd vote against it tonight. It does not go far enough."

One of the biggest highlights of the night was when both candidates were asked if they would get a COVID-19 vaccine when the FDA approves it.

Tillis said he would only after the most vulnerable get one first.

"As soon as I know that they've (vulnerable population) been protected, then I'll be standing in line," Tillis said.

Meanwhile, Cunningham said he was skeptical that politics were playing with science in rushing a vaccine.

"Yes, I would be hesitant, but I'm going to ask a lot of questions," Cunningham explained. "I think that's incumbent on all of us right now -- in this environment with the way we've seen politics intervening in Washington."

A large majority of the latest polls have Cunningham ahead of Tillis with some as much as nine points ahead.

Catawba College political science professor Michael Bitzer says during a presidential race, experts expect to see a lot of down the ballot votes — so he won't be surprised if the U.S. Senate race will be well within the margin of error by mid-October.

Tillis, a former speaker of the North Carolina House, is seeking a second six-year term in Congress. He is running on his record in both Raleigh and Washington, D.C., and is counting on the popularity of President Donald Trump in the state to boost his chances.

Cunningham, a Raleigh lawyer who served in Iraq and later in the state Senate, is betting that North Carolina has soured on Trump and the gridlock in Congress, allowing him to defeat Tillis and win a Senate seat that has changed hands three times since the late Sen. Jesse Helms retired in 2002.